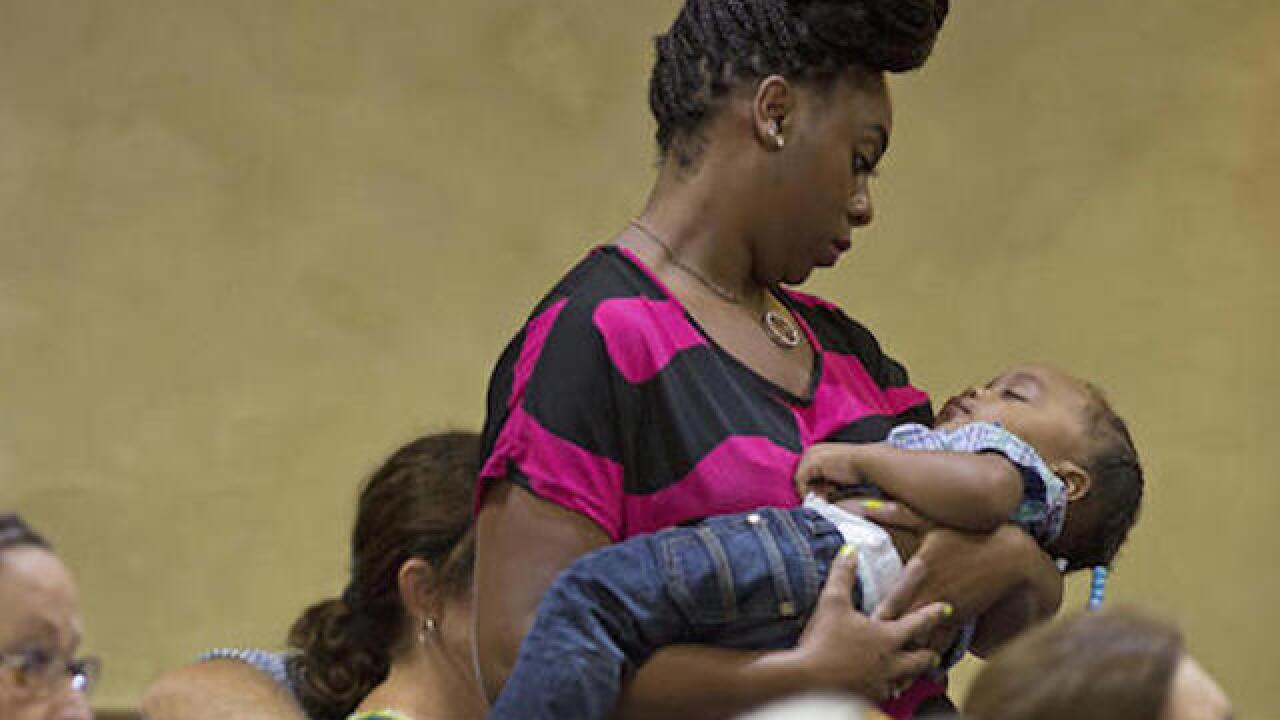 Copyright Associated Press
Max Becherer
<p>Naomi Clark, 27, holds her sleeping son, 1-year-old Caylei Clark, during services at South Walker Baptist Church in Walker, La., Sunday, Aug. 21, 2016. Clark said she moved to Walker two years ago with her husband who is a truck driver. Her and her two children were with her husband in the truck when the flood struck Walker last week. (AP Photo/Max Becherer)</p>

WALKER, La. (AP) — Chuck and Karen Craft are among the thousands of Louisiana residents dragging furniture, appliances and other belongings out of flood-ravaged homes.

Married more than 35 years, the Crafts live outside Walker, a small town near Baton Rouge. Chuck Craft said they thanked God that their family survived and had "a good, long cry" about their irreparable home. Now, they're trying to salvage photos of their four children and 16 grandchildren.

Outside Walker, the rural Baptist church the Crafts attend has become an oasis for flood victims.

As waters rose amid torrential rains earlier this month, National Guard rescue crews dropped people off at South Walker Baptist Church because it sits on a ridge of relatively high ground in Livingston Parish near Baton Rouge. Even as flooding has receded in recent days, the church — like many other places across hard-hit south Louisiana — has continued providing sustenance for the body and soul.

It sheltered 96 people in the days after the storm, and Pastor Mark Carroll said the sanctuary is still a dormitory for more than 20 who lost their homes, including a man who had been living in his car until Saturday. It is also housing volunteers who have come to help people rebuild.

With a congregation of about 100 and with help from the community, the church is offering hot meals, running a pantry stocked by donations from around the U.S. and conducting prayer services. Carroll said the church had been planning a revival in about a month, but he believes the storm recovery is making that happen now as people build relationships with each other through God.

"It's been this entire community," Carroll said by phone Sunday. "We couldn't have done anything without everyone, and I mean just about everyone, pitching in."

The Baton Rouge area got thunderstorms with at least 2 to 3 inches of rain Sunday, the National Weather Service said.

Louisiana Gov. John Bel Edwards said Sunday that people around the U.S. are just starting to pay attention to the extent of flooding that killed at least 13 people in Louisiana. He told CNN's "State of the Nation" that the disaster has received less attention because it wasn't a hurricane or named storm.

"Typically, by this point in a storm, I think Red Cross would be receiving a lot more donations," Edwards said. "I think there would be more volunteers signing up. Although we have some of that in place now, it would be very helpful if people would donate to the Red Cross, to the Baton Rouge Area Foundation, and also to come in and volunteer to help people get back in their homes as quickly as possible."

Edwards, a Democrat who took office this year, said he suggested to President Barack Obama and presidential adviser Valerie Jarrett that they delay a trip to Louisiana until the initial disaster response was over and recovery efforts had started. Obama is traveling to Baton Rouge on Tuesday.

Edwards also praised Republican presidential nominee Donald Trump's Friday trip to Baton Rouge, saying "it helped to shine a spotlight on Louisiana and on the dire situation that we have here."

Officials are setting up a temporary bus system to help people in and around Baton Rouge whose vehicles were damaged by flooding. The bus service, provided by a private company, will run from downtown Baton Rouge to the towns of Gonzales, Walker, Denham Springs, Central and Geismar. The contract is for one week, but services could be extended if there's a need, state Department of Transportation and Development Secretary Shawn D. Wilson said in a news release.

Mike Steele, spokesman for the Governor's Office of Homeland Security and Preparedness, said Sunday that two disaster recovery centers also have opened in areas that flooded in south Louisiana. He says more will open as buildings are found with enough parking and proper access for people with disabilities.

Steele said more than $30 million in federal housing assistance has been approved for residents in the state. About 3,200 people remained in shelters.

Chuck and Karen Craft are staying with relatives for now.

"My story is no different than anybody's down the road," Chuck Craft said Sunday. "Everybody's life is out on the curb to be picked up by garbage."