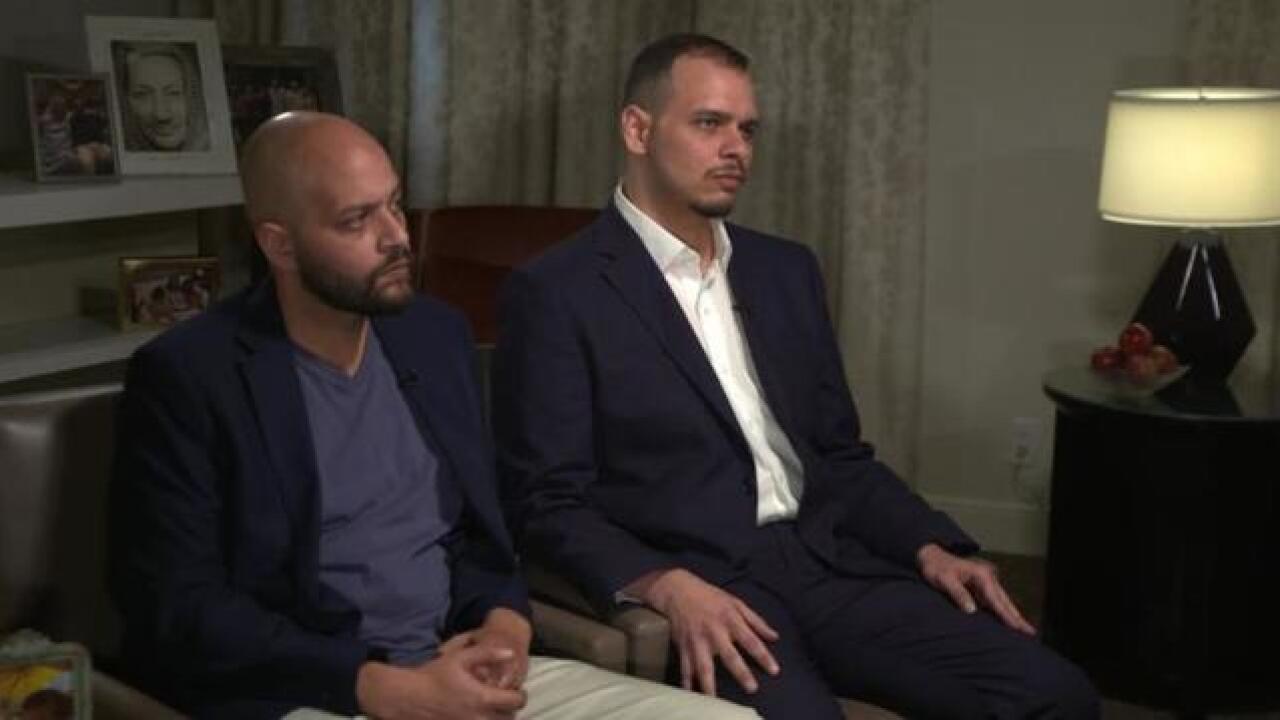 (CNN) -- The sons of murdered journalist Jamal Khashoggi issued an emotional appeal for the return of their father's body, in their first interview since he was killed in the Saudi consulate in Istanbul a month ago.

Salah and Abdullah Khashoggi, who called their father "courageous, generous and very brave," said they have endured weeks of anguish and uncertainty following his disappearance and death.

"I really hope that whatever happened wasn't painful for him, or it was quick. Or he had a peaceful death," Abdullah Khashoggi, 33, told CNN during a sit-down interview in Washington with his brother, Salah, 35.

Authorities in Turkey -- who say Khashoggi was murdered by a hit squad sent from Riyadh -- are still searching for the journalist's remains. Earlier this week, the chief prosecutor's office said Khashoggi's body was dismembered after he was strangled, while the Washington Post reported investigators were looking into the theory that the body was dissolved in acid. A source close to the Saudi Royal Palace has denied any knowledge of the body's whereabouts.

Without their father's body, the brothers say their family is unable to grieve or find closure.

"All what we want right now is to bury him in Al-Baqi (cemetery) in Medina (Saudi Arabia) with the rest of his family," Salah said.

"I talked about that with the Saudi authorities and I just hope that it happens soon."

Saudi Arabia has presented an evolving narrative about what happened to Khashoggi, a Saudi citizen, when he entered the consulate to get papers for his wedding; the journalist was preparing to get married for a third time. Authorities initially denied all knowledge of his fate before later admitting that a group of rogue operators, many part of Crown Prince Mohammed bin Salman's inner circle, were responsible. Riyadh has maintained that neither bin Salman nor his father, King Salman, knew of the operation to target Khashoggi.

But what has really come to trouble his two sons, their two sisters and their mother are the lies, they say, that have sprung up since Khashoggi's death.

Abdullah and Salah say their father has been misunderstood and intentionally misrepresented for political reasons.

"Jamal was a moderate person. He was liked by everybody. He had differences and common values with everyone," Salah said, describing Khashoggi as a genuine, happy person and an "amazing" father.

"I see a lot of people coming out right now and trying to claim his legacy and unfortunately some of them are using that in a political way that we totally don't agree with."

"Public opinion is important... but my fear is that it's being over politicized. People are throwing analysis that may direct us away from the truth."

Khashoggi was labeled as a Muslim Brotherhood sympathizer and a dangerous Islamist in phone calls the Saudi crown prince had with Jared Kushner, US President Donald Trump's son-in-law and Middle East adviser, and John Bolton, national security adviser, according to reports in both the Washington Post and New York Times. The Muslim Brotherhood, considered a terror group in many Arab nations, but not the US or Europe, has long been seen as an existential threat by the desert kingdom's leaders.

"It's just labels and people not doing their homework properly, and reading his article and going in depth. It's easier to stick a label on him," Abdullah said, when asked about the Muslim Brotherhood claim.

Asked how Khashoggi should be remembered, Salah replied, "as a moderate man who has common values with everyone... a man who loved his country, who believed so much in it and its potential."

Reflecting on their father's career as a journalist, they say Khashoggi was "like a rock and roll star" when they were out with him in Saudi Arabia.

"He was a public figure that was liked by everyone else," Salah said. "You don't see that much in media, in print media."

If there is a frailty that comes with suddenly losing a parent, Salah and Abdullah, who is two years his junior, don't show it, but Salah's sunken, shadowed eyes show the strain.

Salah, the eldest sibling, has been made the principal family point of contact by the Saudi government, meaning all of Khashoggi's relatives call him. It's a large family and a large emotional burden not eased by the absence of facts. He says he relies on news reports for updates about the investigation into his father's death.

"Our source is the same source that you have. It is a mystery. This is putting a lot of burden on us -- all of us. That everybody is seeking for information just as we do. They think that we have answers, and unfortunately we don't," Salah said.

Abdullah, who lives in the United Arab Emirates, says he was the last of Khashoggi's children to see him alive. When he heard the journalist was going to be in Turkey he went to visit him and spent time with him and his fiancée, Hatice Cengiz. He saw their blossoming relationship and his father's happiness.

"He was happy. It was a very good opportunity for me to see him. We hung out in Istanbul, we had fun," Abdullah said. "I was really lucky to have last moment with him. I feel very grateful."

Following the murder, Abdullah was the first family member to visit Khashoggi's apartment in Virginia. There, he said, he found that his father had placed a photograph of his grandchildren, Abdullah's two children and Salah's daughter, by his bed.

Abdullah says he realized how much his father loved his family, placing a photograph where he would see them last thing at night.

"That shocked me," Abdullah said. "It put an emphasis on his gentle, tender side of loving his family, his grandkids. It's just something huge and it touched me personally and all the family when they knew about it."

The brothers say their father was planning to leave the Washington area and move to Turkey so he could be closer to his children and grandchildren.

"The main reason behind him choosing to live in Turkey is to be closer to his family. He has a very special relationship with all of his sisters. It's been hard for all of us to hear the tragic news," Salah said.

Salah and Abdullah are suffering, but they are not lathered in self-pity. They're speaking publicly now to restore the part of Khashoggi's narrative that belongs to the family. But they say each day is tough, scouring the news for even the smallest detail about their father's murder.

"It's difficult, it's not easy. Especially when the story gets this big. It's not easy, it's confusing. Even the way we grieve, it's a bit confusing," Abdullah said. "At the same time, we're looking at the media and the misinformation. There's a lot of ups and downs. We're trying to be emotional and at the same time we're trying to get the story -- bits and pieces of the story to complete the whole picture. It's confusing and difficult. It's not a normal situation and not a normal death."

Salah, Abdullah and their sisters Noha, 27 and Razan, 25, all want to get on with their lives, they still live and work in the Middle East and have been put under an unenviable spotlight.

Salah is due to go back to his banking job in Jeddah very soon, and fears how commentators on social media will react. He says his handshake with the Crown Prince shortly before he left Saudi Arabia two weeks ago was widely misinterpreted.

"I mean there was nothing, they were just over analyzing the whole situation," Salah said. "I understand why they're trying to do that. They're trying to get as much information as they can out of anything, which is something that we're also doing. Sometimes they're just baseless claims, sometimes they just don't make any sense."

Salah says he is waiting for the investigation to be over and for the facts to come out.

"The King has stressed that everybody involved will be brought to justice. And I have faith in that. This will happen. Otherwise Saudi wouldn't have started an internal investigation," Salah said.

Asked if he was placing his faith in the King, Salah replied: "yes."