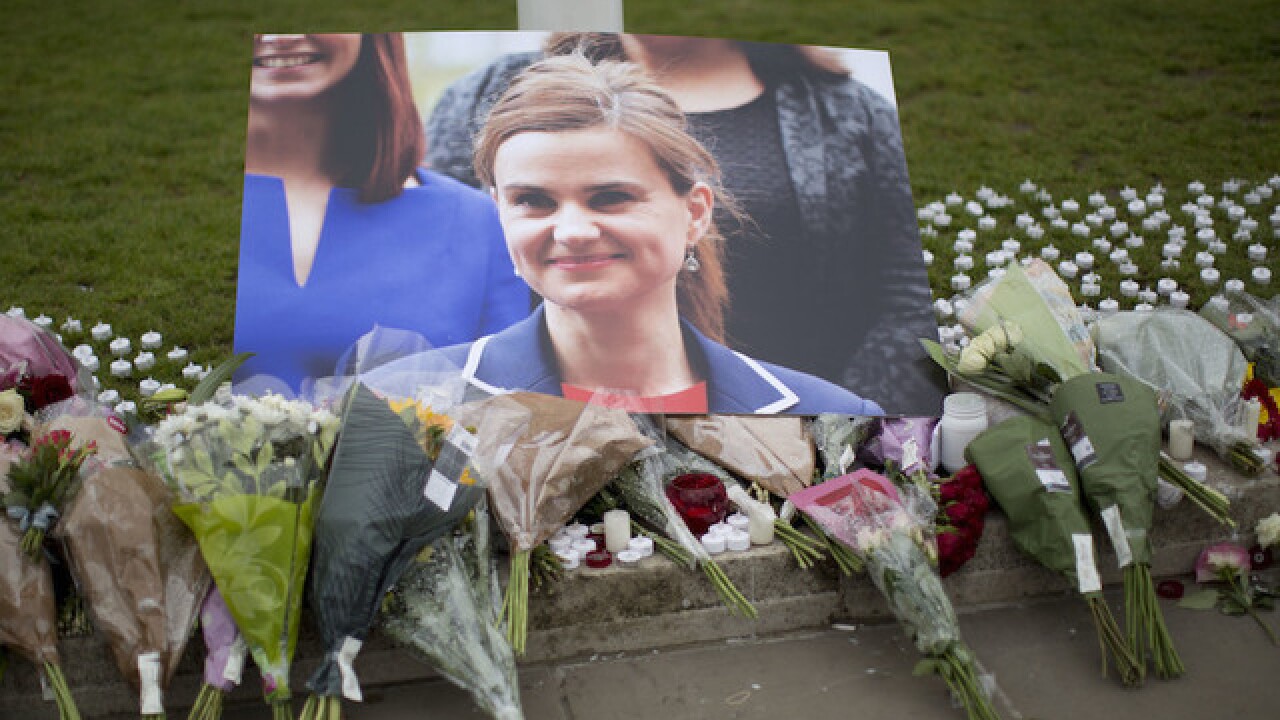 BIRSTALL, England (AP) — Campaigning in Britain's European Union membership referendum remained suspended Friday as the country absorbed the daylight slaying of lawmaker Jo Cox with shock, and worry that the political fury unleashed by the EU campaign was somehow connected to the killing.

A U.S. civil rights group said the man suspected of the gun and knife attack had links to an American white supremacist organization.

The Southern Poverty Law Center said it has records showing Thomas Mair was a supporter of the National Alliance. The center said Mair purchased a manual from the group in 1999 that included instructions on how to build a pistol.

On its website, the center published copies of receipts showing that a Thomas Mair of West Yorkshire — the county where Cox and her suspected killer both lived — bought publications including "Chemistry of Powder and Explosives" and "Improvised Munitions Handbook."

The National Alliance was founded by William Pierce, whose book "The Turner Diaries" has been called a grisly blueprint for a bloody race war. Timothy McVeigh based the 1995 bombing of the Oklahoma City federal building, which killed 168 people, on a truck-bombing described in the book.

A Thomas Mair of Batley — the town where the suspect lives — was also named as a former subscriber to pro-Apartheid publication SA Patriot. In 2006, the online newsletter of far-right group the Springbok Club said Mair was "one of the earliest subscribers and supporters of SA Patriot."

Mair, 52, was arrested Thursday on suspicion of killing Cox, who was shot and stabbed outside a library in her northern England constituency. The suspect's brother, Scott Mair, told reporters his brother had a history of mental illness, but was not violent.

Witnesses said Cox, a 41-year-old Labour Party legislator, was attacked by a man with a homemade or antique-looking gun. Clarke Rothwell, who runs a cafe near the scene of the slaying, said the assailant shouted "Britain first" or "put Britain first" several times.

Britain First is the name of a far-right group, which said it had no connection to the killing.

Cox was a former aid worker who had championed the cause of Syrian refugees and campaigned for Britain to stay in the EU when it votes in a referendum on Thursday.

The referendum has sparked an intense debate about immigration and Britain's place in the world. "Leave" campaigners have said voters should quit the EU to take their country back from bureaucrats in Brussels and curb large-scale immigration from other EU nations.

Both sides in the referendum have halted campaigning activity in the wake of Cox's death. It's not clear when the campaigns will resume.

Politicians from all parties have paid tribute to Cox, and Buckingham Palace said Queen Elizabeth II had written to her husband, Brendan Cox. The couple had two young children.

Rows of police combed the pavements around the site of the attack outside the library in the small town of Birstall, part of Batley, 200 miles (320 kilometers) north of London. Scores of residents left floral bouquets in a memorial at the foot of a nearby statue.

Mothers walked their children to the town's primary school past the spot, some wiping away tears. Others stood talking quietly in small groups about the brutality of the killing, its exceptionally public nature — and whether anyone could have done more to stop the attacker.

Flowers also covered the houseboat on the River Thames where Cox and her family lived when they were in London.

More mourners left flowers outside Parliament, and some linked the heated atmosphere of the referendum to the attack.

"I didn't know her, but she stood for everything that this country should be standing for at the moment and I have two young children and I am just so angry," said teacher Joanna Chidgey, whose father is a former lawmaker.

"Well, angry is not the right word at the moment, but these people who are whipping up bigotry and racism and hatred and intolerance at the moment, they should hang their heads in shame."

Violence against British politicians has been rare since Northern Ireland's peace deal two decades ago. Cox is the first serving lawmaker to be killed since Conservative politician Ian Gow was blown up by the Irish Republican Army in 1990.

The killing has raised concerns about the safety of legislators. While Parliament is protected by armed police, lawmakers spend large amounts of time in their home districts, generally without dedicated security.

Since 2000, two lawmakers have been attacked and wounded while meeting with constituents.

Prime Minister David Cameron's office said a reminder of safety guidance has been sent to members of Parliament, suggesting they go to local police if they have concerns.

"I know MPs are scared," said Dan Jarvis, Labour member of Parliament for Barnsley Central in northern England. But he said lawmakers would continue to meet with constituents.

"We'll be reviewing our security, but I'll walk through Barnsley today like every Friday," Jarvis said.

Many female lawmakers, in particular, say they have been subject to online abuse and threats, and a man was arrested earlier this year on suspicion of sending "malicious communication" to Cox.

London's Metropolitan Police said the man received a police warning, and he "is not the man in custody" over Cox's death.