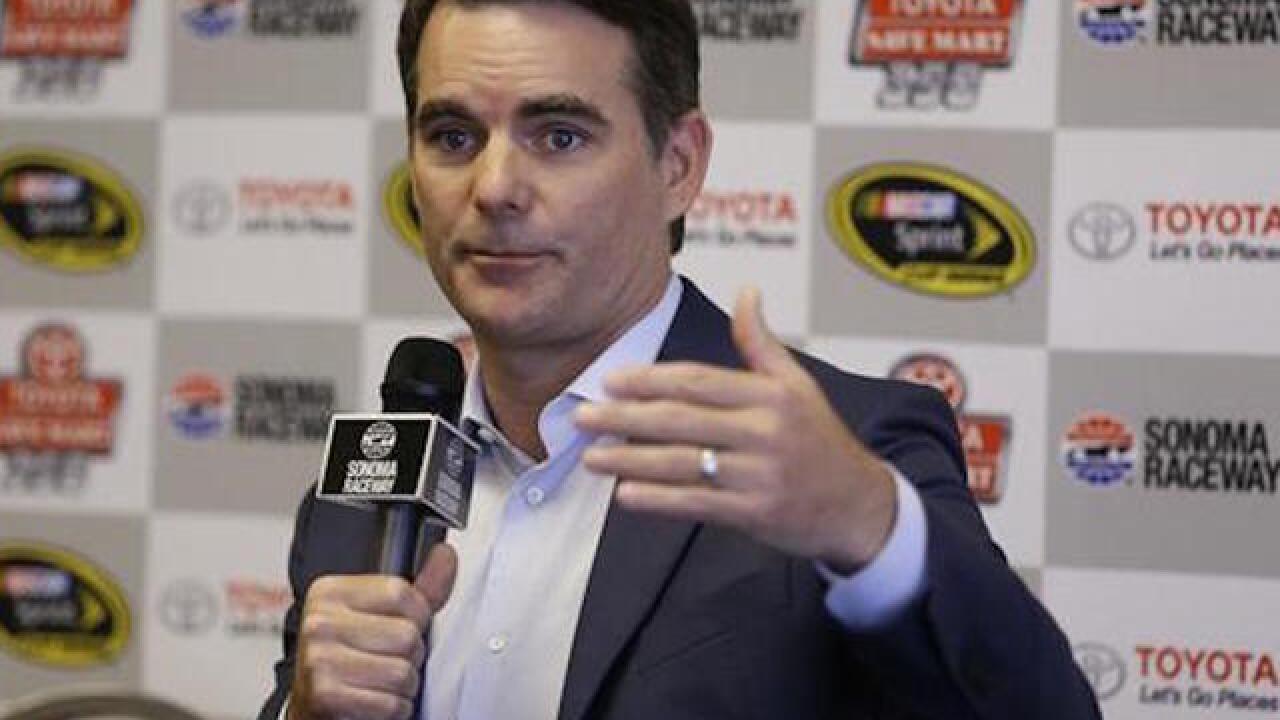 SONOMA, Calif. (AP) — Jeff Gordon is open to succeeding Michael Strahan as Kelly Ripa's new "Live" co-host — so long as he could continue his new job as a NASCAR analyst.

Gordon is calling his final race of the season Sunday for Fox Sports and then will head into the first significant downtime of his professional career. The four-time NASCAR champion is in his first year in the broadcast booth, and he insisted Saturday he'll be back next year when Fox resumes coverage of the first half of the season.

However, Gordon didn't quash recent speculation that ABC is interested in him joining Ripa on "Live." Gordon co-hosted with Ripa nine times during the "Live With Regis and Kelly" era.

"I am flattered that my name has been associated with that," Gordon said when asked by The Associated Press about the possibility of him joining "Live."

"I've always maintained a great friendship with the show, some of the producers and folks within the show. I had a great time co-hosting, and I certainly would welcome it."

Gordon then reiterated: "My priority is Fox and Fox Sports, and NASCAR. I will definitely be back in the booth next year; if there was something that could fit into and around that, great."

Gordon was media savvy long before he hung up his firesuit for the tailored blue business suit he wore Saturday at the race track, where he has transitioned from a lucrative career as one of NASCAR's first stars to transcend into Madison Avenue and the glitz and glamour of Hollywood.

So he declined to give much insight into a possible job with Ripa, and didn't address whether he's had talks with the show since Strahan's departure.

"It's been really interesting to see that unfold, but I really don't have anything that I can say about that," Gordon said.

Gordon was considered NASCAR's most charismatic driver during a career that spanned two-plus decades. His 93 career victories trail only Hall of Fame drivers Richard Petty (200) and David Pearson (105) on NASCAR's all-time win list, and his fame reached far beyond the track and resonated with non-sports fans.

He won all the big races, collected four championships in just seven years and had 58 victories before his 30th birthday.

In the meantime, Gordon became such a household name that during his career he hosted "Saturday Night Live" and was name-dropped in a song by rapper Nelly.

Gordon was at ease in his nine appearances alongside Ripa, where he showed his quick wit and comfort as the interviewer. He's transitioned nicely in the Fox booth, where his start in February was slightly overshadowed by the dynamics of working alongside outspoken Hall of Famer Darrell Waltrip.

Gordon and Waltrip seemed uncomfortable together at times this season, with each trying to speak over the other to make a point.

Gordon admitted Saturday that he was "scared to death in Daytona" before his first assignments in the booth because the "whole experience was pretty overwhelming." Now, 15 races later, he's at ease and almost wishes NASCAR's television schedule wasn't shifting to NBC next week.

"I haven't really missed being in the car that much because of the challenge ... that it's been being in the booth, getting to know a whole new team of people to work with, trying to understand what all goes into a broadcast," Gordon said. "I feel a lot more confident and comfortable. I know my colleagues that I'm working with far better. I kind of know what to look for, what to ask for, and where I fit in better than I certainly did then."

Gordon ruffled some feathers in the booth this year with longtime rival Brad Keselowski. Gordon made reference to some car modifications on Keselowski's car during a recent race, and the active driver bristled about Gordon pushing an agenda because Gordon still maintains ties with Hendrick Motorsports, the only team he ever drove for at NASCAR's top level.

It led to a sit-down interview Gordon conducted with Keselowski for Fox in which the television personality was able to explain his position to the driver.

"I love what Brad brings to the sport. I think that he maybe feels or felt like I carried over some of that animosity from our run in on the race track ... but it's actually quite the opposite," Gordon said. "I've put that aside, and I really like what he brings and his unique perspective on the sport. I don't necessarily think the same way that he does — I don't know a lot of people that do.

"There's no doubt I have some bias, and I think everybody does in some way, and so that part I agree with him. Yeah, there's times when it's hard for me not to want to talk about Chase Elliott or one of the Hendrick drivers when they're doing something good, but I'll talk about them when they're doing something bad, too. I love what Brad brings, and we had a nice conversation, and it made for good TV to be honest."