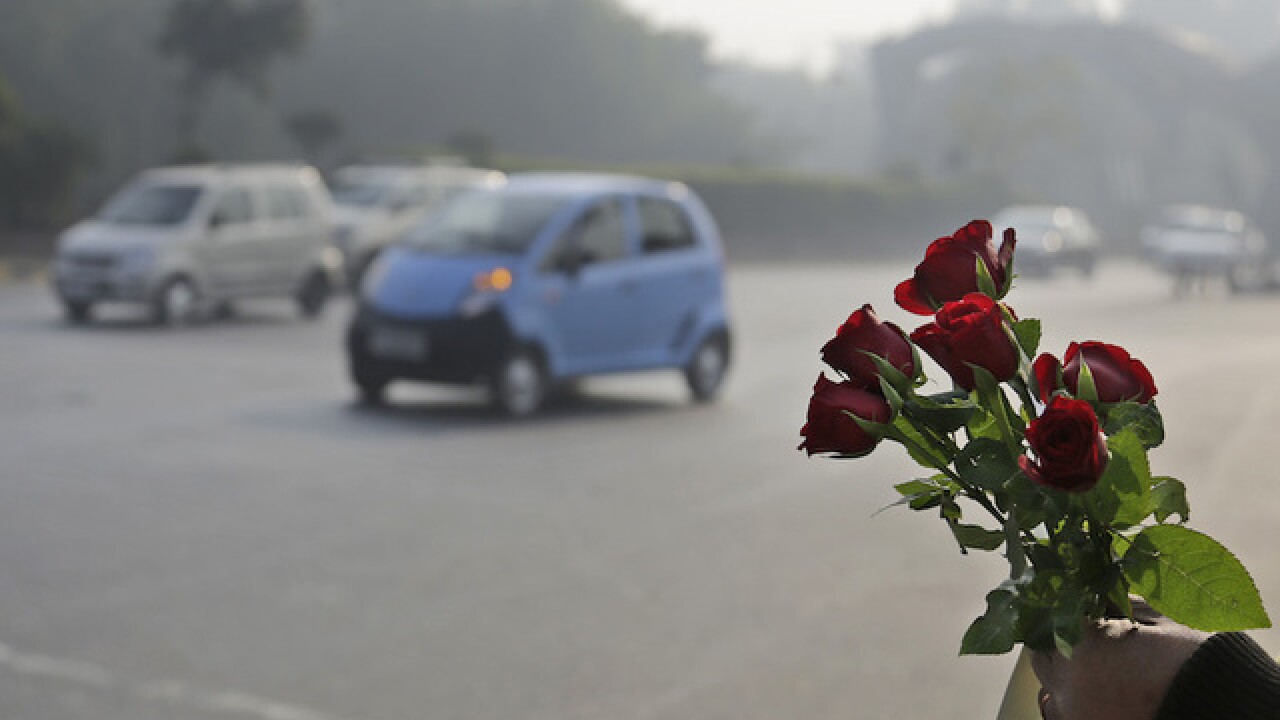 Altaf Qadri
<p>A civilian volunteer holds roses to be given to the drivers not following the rules on the first day of a two-week experiment to reduce the number of cars to fight pollution in New Delhi, India, Friday, Jan. 1, 2016.</p>

The Indian capital on Friday kicked off a sweeping plan to reduce its record-high air pollution by limiting the numbers of cars on the streets for two weeks.

New Delhi is testing a formula where private cars will be allowed on the roads only on alternate days from Jan. 1-15, depending on whether their license plates end in an even or an odd number.

On Friday, most cars appeared to be following the rules and traffic was a trickle compared to the usual rush-hour chaos. But with schools and colleges shut, and many offices closed for the New Year's holiday, it was not clear how much of the reduced traffic was the result of the new regulations. Monday, the first regular workday since the plan began, will be a clearer test of whether New Delhi's notoriously rule-averse drivers will comply, and how much the city's already-overburdened public transit system can help.

The city government last week announced a number of exemptions to the new rules, including top politicians, judges, police officials, women, sick people and motorcycles. Still, the plan represented the most dramatic effort the city has undertaken to combat pollution since a court order in 1998 mandated that all public transport use compressed natural gas.

Police appeared to be purposefully keeping a low profile Friday. Except for a handful of major intersections, where police and civil defense volunteers set up checkpoints to watch for wrong-numbered license plates, there was little official presence on the roads at all.

When cars were pulled over, the result was almost always a warning, not the $30 fine that has been announced.

"Today we are just educating drivers," Assistant Sub Inspector Krishan Singh told the driver of an Associated Press vehicle — with the wrong license plate number — when it was eventually pulled over.

Police officials said they do not have enough staff to properly enforce the rule.

Arvind Kejriwal, the city's top elected official and the architect of the plan, told reporters that he was "overwhelmed" by the response to the new rules.

People "seem to have accepted this anti-pollution drive with an open heart," said Kejriwal, who said recently that the plan would be scrapped if it inconvenienced too many people.

The World Health Organization last year named New Delhi the world's most polluted city. The pollution is at its worst in the winter, when winds die down and dense smog often engulfs the city in the morning.

Delhi has an estimated 7.5 million registered vehicles, including many that run on highly polluting diesel. The pollution is fed by construction dust, ash from crop waste burned in nearby farming areas and sand from the Thar desert.

On Friday morning, the average PM2.5 levels for New Delhi were over 297. That is a relatively low number for New Delhi in winter, but is still about 15 times higher than the WHO standard of 20.

These inhalable particles are smaller than 2.5 micrometers, small enough to penetrate deep into lungs and cause maximum damage.

Plans to lower the city's pollution levels included shutting down one of the oldest and least-efficient power plants, a temporary ban on the sale of large diesel vehicles and a stiff toll for pollution-spewing trucks entering the Indian capital.

The Supreme Court earlier this month also banned trucks from entering the city if they are over 10 years old. In addition, taxis have to switch to compressed natural gas by March 31.

Environmental expert Anumita Raichaudury said that it was good that the city at least now has a plan to react to high pollution levels.

"It's important to clamp down by taking at least 50 percent of the vehicles off the roads for an immediate impact," Raichaudury said.

However, it remains unclear if the city would use the rules to improve air quality when pollution reaches hazardous levels.