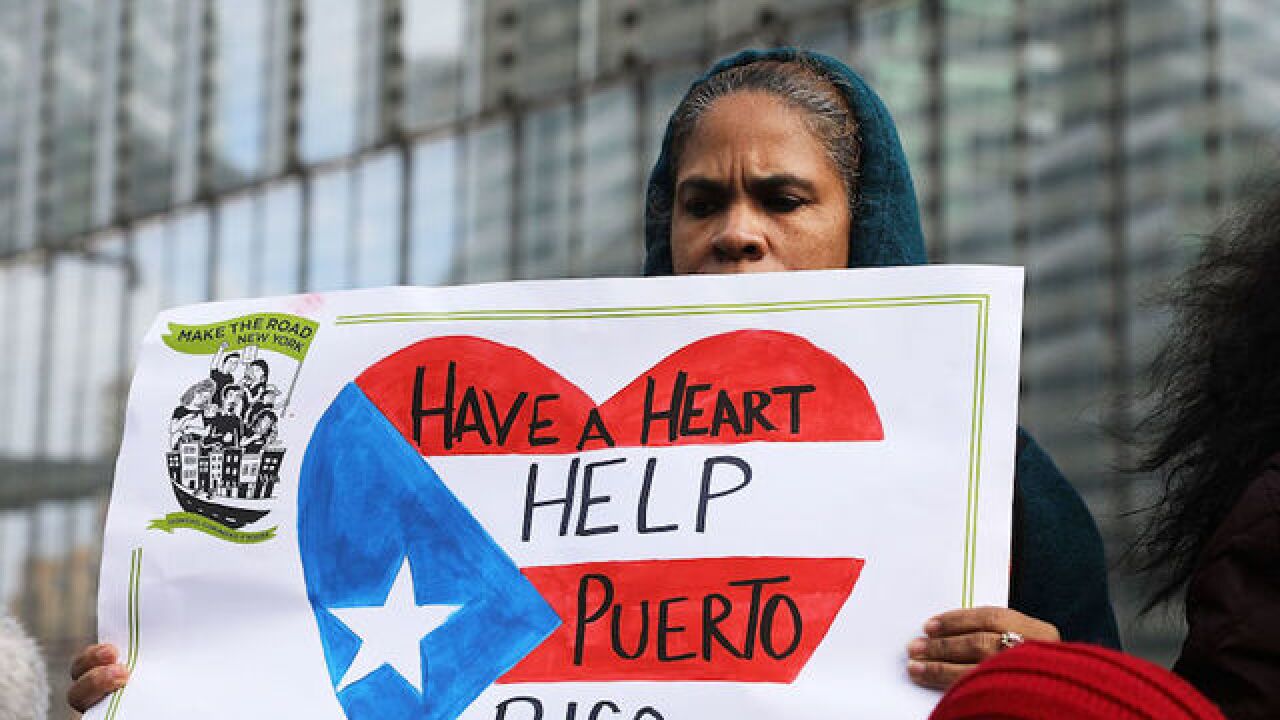 Image copyright 2018 Getty Images. All rights reserved. This material may not be published, broadcast, rewritten, or redistributed.
Spencer Platt
<p>Puerto Rican activists and others participate in a protest outside of New York City's Federal Emergency Management Agency (FEMA) office to call on Congress and FEMA to deliver the aid and resources thousands of Puerto Ricans desperately need to recover on February 20, 2018 in New York City. </p>

Hurricane Maria caused an estimated 2,975 deaths in Puerto Rico, according to a new report from George Washington University -- 46 times more than the official toll given by the government.

Researchers calculated excess deaths that occurred in the US commonwealth between September 2017 and February 2018.

The study was commissioned by the Puerto Rican government after the September 2017 storm.

The latest estimated death toll is far higher than the current official toll of 64.

A key unanswered question: Will the Puerto Rican government now revise its official tally as a result?

Another uncertainty: Will this new study, conducted at the request of Puerto Rican officials, provide any closure to families who've long argued their loved ones died because of the storm, but haven't received any official acknowledgment?

The report, released to the public Tuesday, follows a number of others like it.

Researchers behind George Washington University's study said they felt they were able to provide a more accurate estimate because they took into account additional factors such as migration.

"I do think this study helps to validate that sense that many people had that there were just too many deaths," said Lynn Goldman, dean of the university's school of public health.

But she also stressed that Tuesday's report marks only the first phase of the study.

"In the next phase, we would like to dig down deeper into that number to understand among all the deaths that occurred, which of them were related to Hurricane Maria, which of them would not have occurred if it hadn't been for the storm? We're not able to say that now," Goldman said.

She acknowledged that a complete list may never be possible.

CNN and other news organizations have been raising questions about the official Hurricane Maria death toll for months. In November, CNN reporters surveyed 112 funeral homes across the island, about half the total. Reporters found that funeral home directors identified 499 deaths they considered to be hurricane-related. In December, the New York Times estimated 1,052 "excess deaths" occurred after Maria. Others produced similar estimates.

A research letter published earlier this month in the medical journal JAMA estimated that between 1,006 and 1,272 people died in connection to the storm.

In May, a team that included researchers from Harvard University published a study in the New England Journal of Medicine estimating that 793 to 8,498 people died in Maria's wake, a range that some academics have criticized as overly broad. The study's midpoint estimate -- 4,645 deaths -- became a rallying cry for activists upset by what they see as a lack of accountability for the scale of the catastrophe by officials in Puerto Rico and the United States.

This year, CNN and the Centro de Periodismo Investigativo (CPI) in Puerto Rico sued the island's Demographic Registry to make public a database with information about everyone who died in the months after the storm.

Using the same database, CNN reported on deaths labeled in government records as hurricane-related that were not counted by officials; and, in partnership with CPI, reported on an apparent leptospirosis "outbreak" that was not identified as an outbreak by authorities.

The network also created an online database the public can use to search for the names of all the people who died in the months after the storm -- and tell reporters about deaths that may have been related to Maria.