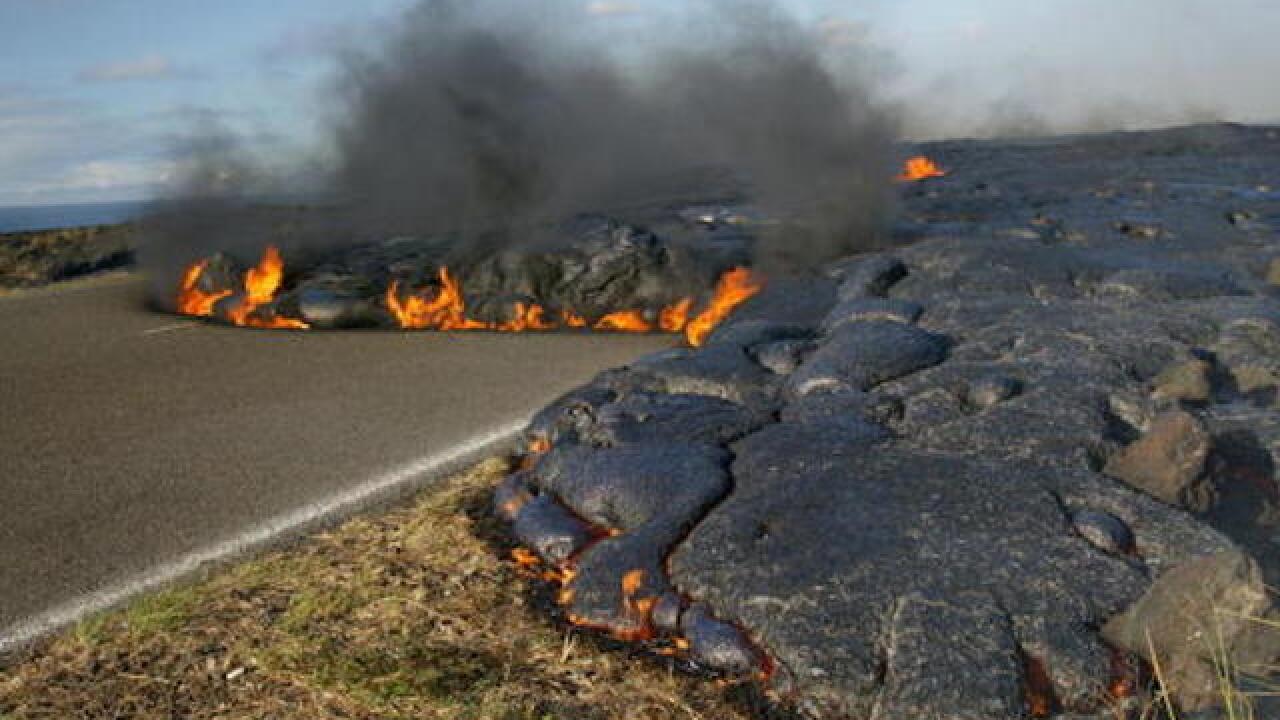 Image copyright 2018 Getty Images. All rights reserved. This material may not be published, broadcast, rewritten, or redistributed.
Phil Mislinski
<p>VOLCANO NATIONAL PARK HAWAII - JULY 21: A lava flow runs over Chain of Craters Road in Volcano National Park. On July 27 Kilauea's lava flow increased resulting in additional forest fires within the park. Kilauea has been erupting since May 12, 2002. Thousands of tourists have been flocking to the big island of Hawaii to view the flows since July 27, 2002. (Phil Mislinski / Getty Images)</p>

Between the flowing lava and toxic gas that are forcing evacuations, the Kilauea eruption feels like a never-ending emergency for the people who live in the Puna district on Hawaii's big island.

Evacuated residents are allowed into the neighborhood to check on their homes for a period each day -- 7am until 6pm -- conditions permitting. For some, it's a chance to chart the lava's progression and to see if any new fissures are opening in the ground near their homes.

Stacy Welch moved to Leilani Estates from Northern California 11 months ago -- fulfilling her dream of returning to live in the state of her birth. Outside her driveway, the road is buckling with cracks. Behind her one-acre lot and across the street, a fissure has opened. As she stands in front of her home, she watches the plume of gas rise above the trees.

"My house is standing. Thank you, Pele," Welch said, referring to the goddess believed to live in the caldera of Kilauea. "My house is a couple feet away from fissure number nine, so we have to have our gas masks on. We try to check on our house at least once a day."

The streets inside Leilani Estates are oddly empty. Many smooth, paved roads are now marked by jagged cracks -- some so large further passage is impossible. The crevasses are created by the moving lava underground. Residents say the cracks appeared first, then steam began to seep out and finally lava -- the birthing process of a volcanic fissure.

One road that used to bend downhill now disappears under a sea of lava that has built up into a mount that is still spewing volcanic gas and molten rock.

In some places, the roads are still lined in verdant green dotted with the bright reds and purples of tropical flowers. But close to the vents the plants are a sickly yellow-brown from the volcanic gases that continue to eerily steam out of the fissures, warm and, at times, opaque.

It is impossible to get close to those cracks without a gas mask. The metallic taste of the sulphur dioxide lingers and irritates the eyes and throat. The fissures often rumble as they are erupting, the pounding heard over a mile away -- caused by that dangerous mix of molten rock and deadly volcanic gases being forced from deep within the earth. The blasts at times sound like a jet taking off; at other times, they are short and powerful like a canon.

'Everyone here helps each other'

Stacy lives with her 19-year-old daughter Madison Welch. Maddy joined her mother here just three months ago from Vacaville, CA. The ever-changing conditions inside their subdivision is unsettling for Maddy.

"It's kind of like get in there, get out of there. That's why I worry so much about my mom," Maddy said. "We just don't know what's going on and it is so unpredictable."

The Welches evacuated to a shelter in nearby Pahoa soon after Kilauea began erupting. More than two weeks later, they are still staying there.

"It's not like a hurricane ... just exploding and then being done," Maddy said. "It's not just something that's boom, done. This disaster just happened. It is still happening."

"It does seem like my life is on pause, but I can't let it be on pause. I have to get things done. I have to live my life," the younger Welch said.

After losing her two tourism-related jobs because of the eruption, Maddy has found new employment working as a hostess at a restaurant in Hilo.

"Everyone here helps each other," Maddy said, noting how people in the community gave her several dresses she can wear to her new job.

Yet it's a different story for Stacy who works as a waitress inside the Hawaii Volcanoes National Park which is currently closed. "I'm unemployed because the job I have is volcano-related," she said. So for now, she's out of work.

While the people who live in Leilani Estates and Lanipuna Gardens are dealing with fissures and lava, on the rest of the island -- even nearby Hilo -- it is business as usual.

After Kilauea has launched ash into the sky from the summit, some schools closed briefly. But all schools have reopened, according to Hawaiian Civil Defense.

For long-time residents of the Big Island, they know they live in the shadow of volcanoes. They have seen Kilauea's east rift zone spew lava as recently as November 2014. With no end in sight to Kilauea's disruption, residents here are at the mercy of Pele.