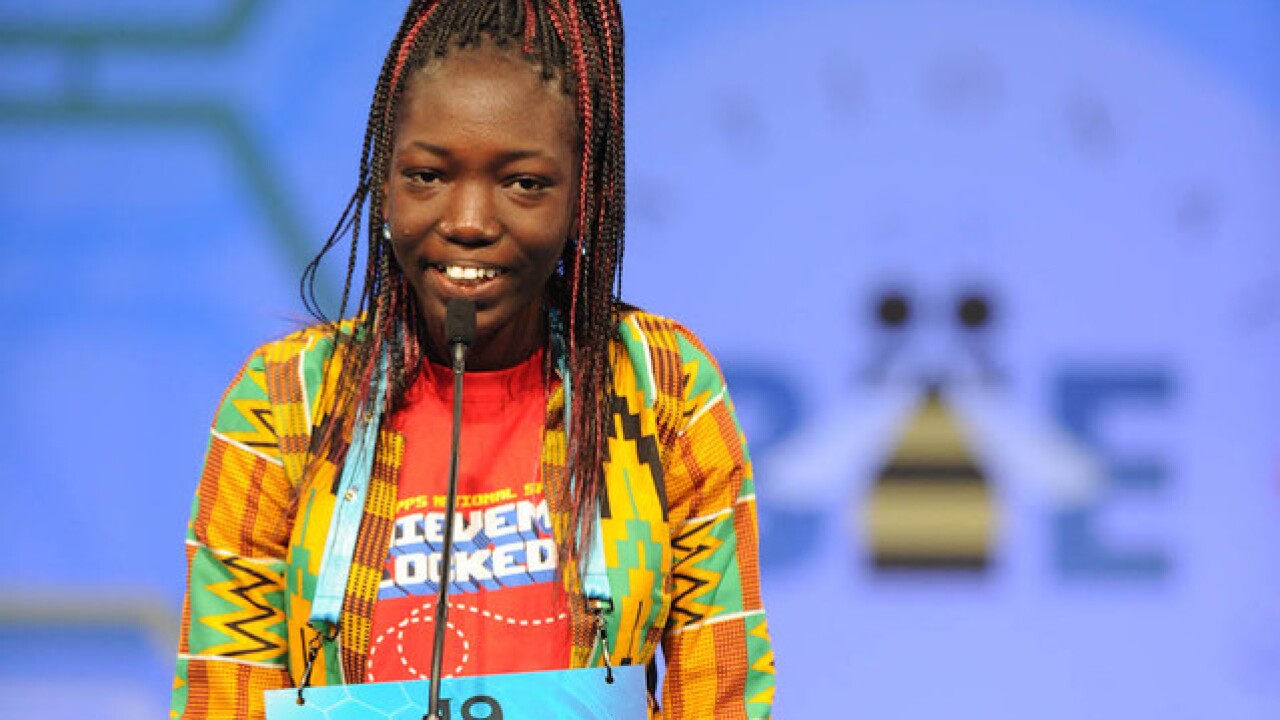 After it was announced on Wednesday evening that she was one of the 45 finalists for the 2016 Scripps National Spelling Bee, 14-year-old Afua Ansah basked in the spotlight.

“It felt incredibly exciting, it was beyond my wildest dreams, to finally make it on my first try,” Afua said. “It has been quite intense because we have been working on the word list for quite some time.”

Joined by friends, coaches and her sponsor, Afua relished the attention as her home nation will be watching and cheering her on.

“I am feeling very proud to be doing this on behalf of my country,” Afua said. “I feel like an ambassador of Ghana so I am proud to carry the flag of my country at the finals.”

What Afua has already been able to accomplish has been against the odds. Ghana has one of the worst female literacy rates in the world at 71.4 percent. Afua’s coach Emmanual Afful hopes that Afua’s success in the Bee is something that can inspire their African nation.

“It is a very proud moment for me and I believe it has happened because of the years of hard work and determination,” Afful said. “I can’t explain how happy I am, but I am very proud.

“The thing I told her is that, ‘Children in America are no different than children around the world,’” he continued. “The only difference is we are poorer at reading and writing. And so I posed a challenge to her to read, study, ask question and be curious and you’ll be there and that is exactly what happened.”

After nearly acing her written exam on Tuesday, Afua easily spelled “hauberk” and “senescent” on Wednesday. She was one of 177 to spell both words correctly Wednesday, but based on examination of spellers on Tuesday, she earned the second-highest score going into Wednesday.

“I’ve already seen them, they are familiar words to me,” Afua said of senescent and hauberk.

Afua, and the other 44 finalists, will take the stage at 10 a.m. Eastern, or 2 p.m. Ghana Time, on Thursday. The beginning of the finals will be televised on ESPN2 and continued at 8 p.m. ET on ESPN.

Afua said when she returns the Ghana, she looks forward to sharing the experience with her friends and family.

During her time in Washington, Afua said she has gotten to visit a number of monuments and the Smithsonian Zoo. Another thing that awed Afua was the Capital Wheel; a large Ferris wheel along the Potomac, just outside the Spelling Bee’s hotel.

“We don’t have those in Ghana,” she said. “We tried it and it was awesome.”

It was an experience that needed the help of sponsors, and Afua said she’s appreciative to them.

“In Ghana doesn’t have much of sponsorship as it does here, so people don’t consider it so much so making it here is a big thing already,” Afua said. “I have gotten some calls from my country, we see you here, we see you on the website.”

One thing Afua has in common with many other spellers is her love of music. Afua said her favorite artists are Adele, Beyonce and Taylor Swift. According to a survey of spellers, Taylor Swift and Adele are the two most popular artists among spellers.