German attacker was in online chat before explosion, police say 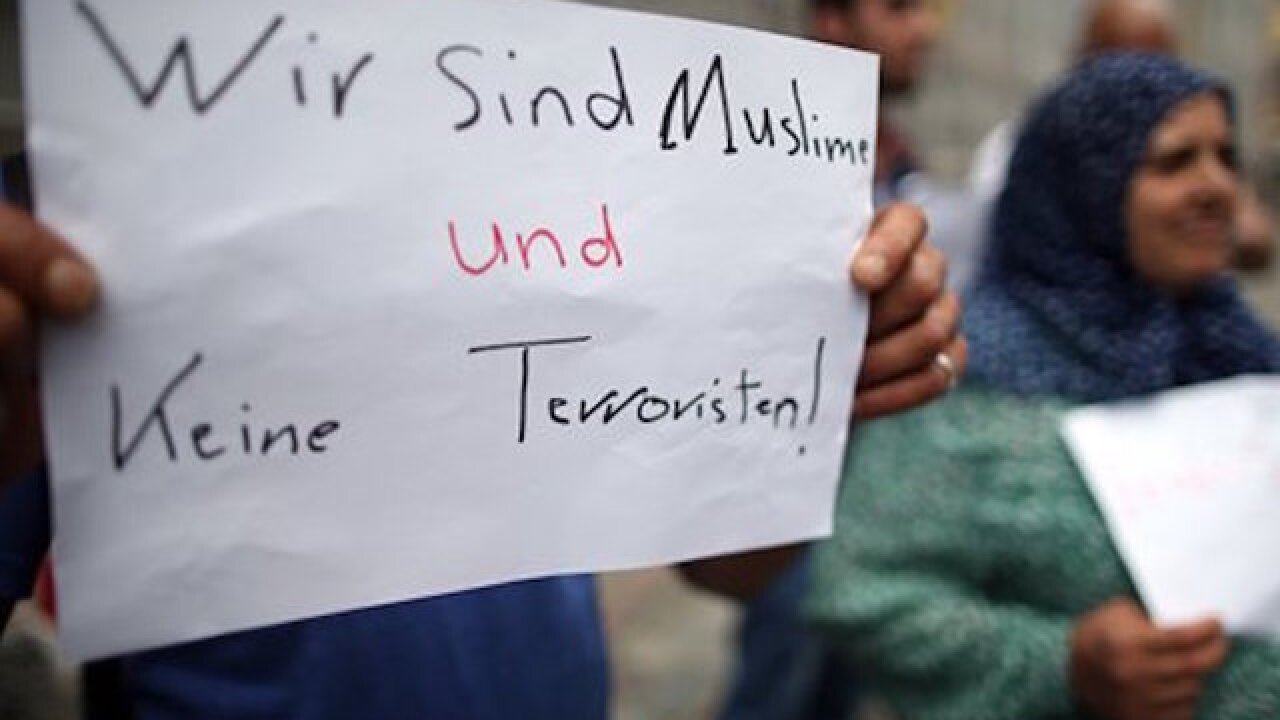 Copyright Associated Press
Daniel Karmann
<p>Refugees from Syria stand near the site of the attack and hold up a sign reading 'we are Muslims and not terrorists' in Ansbach, Germany, Tuesday July 26, 2016. In the most recent attack, a 27-year-old Syrian asylum-seeker set off a backpack laden with explosives and shrapnel Sunday night after being refused entry to a crowded music festival in the Bavarian city of Ansbach, killing himself and wounding 15 people. (Daniel Karmann/dpa via AP)</p>

BERLIN (AP) — A 27-year-old Syrian asylum seeker who blew himself up at a bar in the southern German town of Ansbach was chatting online with a still-unidentified person immediately before the explosion, Bavaria's interior minister said Wednesday.

Attacker Mohammed Daleel died and 15 people were wounded when his bomb exploded in a wine bar Sunday night after he was denied entry to a nearby open-air concert because he didn't have a ticket.

"There was apparently an immediate contact with someone who had a significant influence on this attack," state Interior Minister Joachim Herrmann said on the sidelines of a party meeting in southern Bavaria, news agency dpa reported.

It wasn't clear whether Daleel was in contact with the Islamic State group or where the other person in the chat was, Herrmann said. He said investigators checking the assailant's cellphone came across the "intensive chat" and that "the chat appears to end immediately before the attack."

"Because of witness testimony on what happened and also the course of the chat, there are indeed questions about whether he intended to set off the bomb at that moment," Herrmann said.

On Tuesday night, the online magazine of the Islamic State group said the attacker spent months planning the attack, once even hiding his home-made bomb in his room in a state-supported asylum shelter moments before a police raid.

The weekly Al-Nabaa magazine's report added that Daleel had fought in Iraq and Syria with a branch of al-Qaida and the IS group before arriving in Germany as an asylum seeker two years ago.

The Ansbach explosion was the last of four attacks in the country in the span of a week, two of which have been claimed by IS. Islamic extremism wasn't the motive in the other two — including the deadliest of the series, Friday's shooting in Munich in which nine people were killed.

Al Nabaa's Arabic-language report on the attacker said he initially fought against government forces with al-Qaida's branch in Syria before pledging alliance to IS in 2013. He also helped the group with its propaganda efforts, setting up pro-IS accounts online.

In Germany, he started making the bomb, a process that took three months, al Nabaa wrote.

It added that German police once raided his asylum shelter in an unrelated case and searched Daleel's room without noticing the bomb that he had hidden moments earlier.

IS earlier claimed the Ansbach attack, publishing a video it said was of Daleel pledging allegiance to the group and vowing that Germany's people "won't be able to sleep peacefully anymore." It appears to be the same video as the one found by German investigators on the suicide bomber's phone.

Daleel unsuccessfully sought asylum in Germany and was awaiting deportation to Bulgaria.

A senior figure in the nationalist Alternative for Germany party, which has no seats in the national parliament but saw its popularity surge after last year's migrant influx, suggested Wednesday that there should be "a halt to immigration for Muslims to Germany" until all asylum seekers now in the country have been registered, checked and had their applications processed.

"For security reasons, we can no longer afford to allow yet more Muslims to immigrate to Germany without control," Alexander Gauland, a deputy party leader, said in a statement. "There are terrorists among the Muslims who immigrated illegally and their number is rising constantly."

The Interior Ministry says Germany is not still seeing uncontrolled migration. Spokesman Johannes Dimroth said that "for some time" all new arrivals have been registered and checked against security databases.

As for whether people could be treated differently depending on their religion, "as I understand it that simply would be incompatible with our understanding of freedom of religion," he said.

The bloodshed in Germany began July 18, when a 17-year-old from Afghanistan wielding an ax attacked passengers on a train near Wuerzburg, wounding five people before he was shot to death by police. The IS group claimed responsibility.

German train operator Deutsche Bahn said Wednesday it would invest heavily in increased security and hire hundreds of security staff to control trains and train stations across the country.

The city of Munich said it is re-evaluating its security concept for the annual Oktoberfest and is considering banning all backpacks from the popular beer fest.