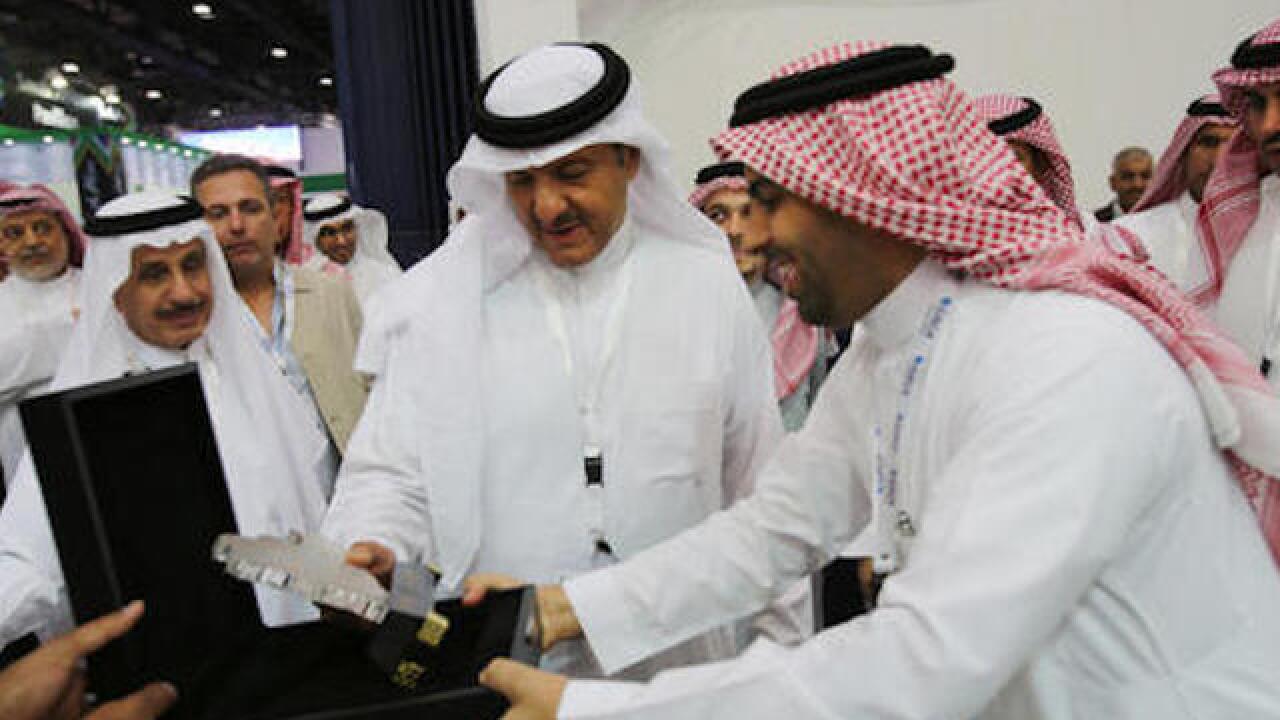 Copyright Associated Press
Kamran Jebreili
<p>Prince Sultan bin Salman, center, receives a gift while he visits the Saudi Arabia stand at the ArabianTravel Market exhibition in Dubai, United Arab Emirates, Tuesday, April 26, 2016. A day after Saudi Arabia outlined sweeping reform plans, the top prince spelled out for the first time in an AP interview how the kingdom aims to make tourism an important element of its shift toward less reliance on oil. (AP Photo/Kamran Jebreili)</p>

DUBAI, United Arab Emirates (AP) — General Electric Co. said Monday it made a series of deals with Saudi Arabia worth more than $1.4 billion as part of the kingdom's ambitious plan to wean itself off crude oil.

GE said $1 billion worth of projects would be implemented by 2017 with the Saudi Arabian Industrial Investments Co., which formed in 2014 by royal order to boost the country's manufacturing industry. GE said its agreement with the organization would see it help develop industry and manufacturing in the kingdom, as well as create jobs for Saudi youth.

Another $400 million would go toward building a forging and casting manufacturing facility for the marine and energy industry in the kingdom, with hopes of it being operations by 2020 and providing over 2,000 jobs, GE said. In the future, there's a possibility of another $2 billion in projects coming as well after 2017, the company said.

Other projects that GE did not offer monetary values for include boosting the local aviation repair industry, offering digital services to factories, working on manufacturing LED lights in the kingdom and training young men and women.

GE's chairman and CEO Jeffrey Immelt said the project showed the company wanted to expand its long-time presence in Saudi Arabia in "a new and visionary way."

"Together, we will create quality jobs for Saudi youth, ... boost exports, enhance economic competitiveness and support the vision and aspirations of Saudi Arabia," Immelt said in a statement.

The deal comes as part of the kingdom's Vision 2030 plan to wean itself off dependence on oil production. The plan, announced by Deputy Crown Prince Mohammed bin Salman, the son of King Salman, also calls for floating a stake in the world's largest oil company, Saudi Arabian Oil Co., and setting up one of the world's biggest government investment funds.

Immelt met Monday in Jiddah with Khaled al-Falih, Saudi Arabia's new energy minister and the chairman of Aramco, the state-run Saudi Press Agency later reported. The agency offered no details of the agreements between the kingdom and GE.

"We are delighted in Saudi Arabia that GE is supporting the kingdom's Vision 2030 and the new plan for economic growth," al-Falih said in a statement.

GE, based in Fairfield, Connecticut, has worked in Saudi Arabia for over 80 years. It has more than 2,000 employees in the kingdom working in the aviation, health care, oil, utilities and transportation sectors. Under the deals announced Monday, GE hopes to expand its workforce in Saudi Arabia to 4,000 people by 2020.

Any additional jobs would be welcome to Saudi Arabia's 28 million people, who currently struggle with unemployment and providing youth opportunities outside of the public sector. Low global oil prices saw the kingdom have a nearly $100-billion deficit last year, while the government forecasts an $87-billion deficit this year.