FSU president to yoga shooting vigil: 'Our hearts are broken' 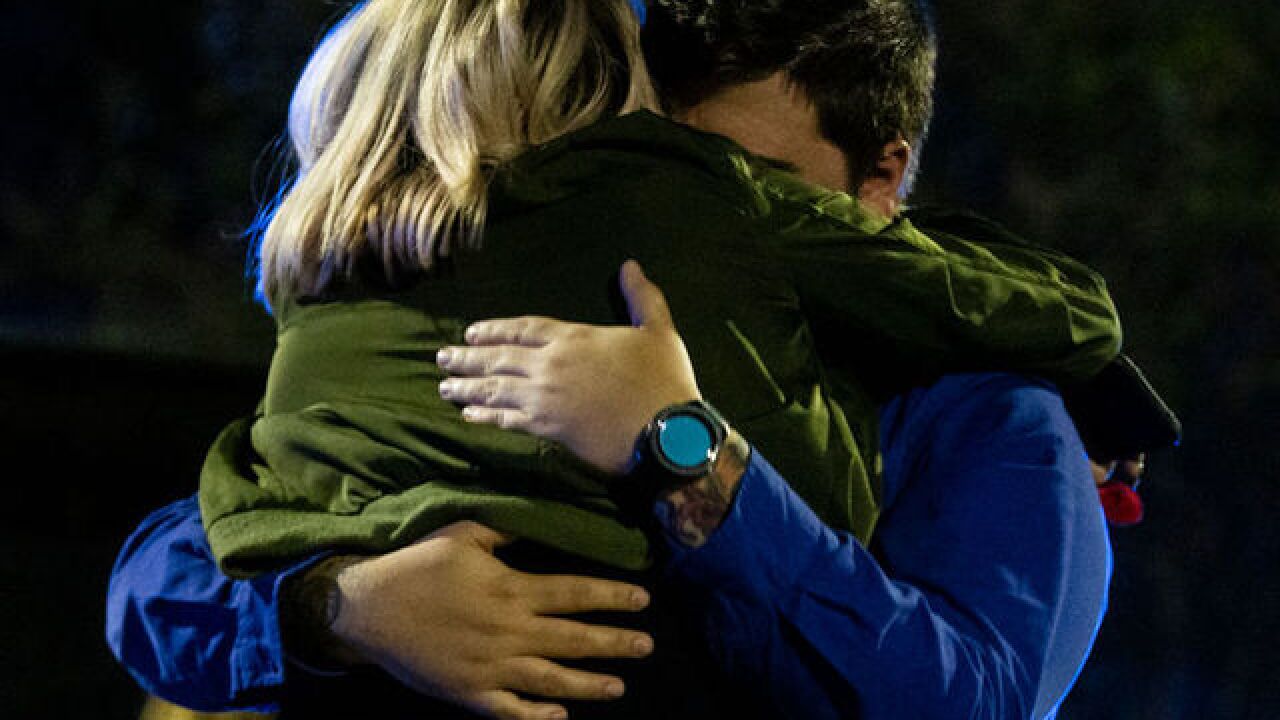 Image copyright 2018 Getty Images. All rights reserved. This material may not be published, broadcast, rewritten, or redistributed.
Mark Wallheiser
<p>Nick Cessna, right, confronts his girlfriend Melissa Hutchinson who rendered aid to some of the victims of a mass shooting November 2, 2018 in Tallahassee, Florida. </p>

Scott Paul Beierle, 40, posed as a customer when he walked into Hot Yoga Tallahassee on Friday evening and fired a handgun without warning, police said.

The yoga students fought back, police said, but two women were killed and five people were wounded. The gunman had fatally shot himself by the time officers arrived.

Tallahassee yogis as well as the health care and college communities are mourning the victims: Maura Binkley, 21, and Nancy Van Vessem, 61.

On Sunday evening, FSU students and faculty came together for a vigil honoring Van Vessem -- a faculty member -- and Binkley, a student.

The crowd gathered on Langford Green on Sunday evening and held up battery-powered tea candles that flickered under an overcast sky as a small choir sang, "Hymn to the Garnet and Gold."

"Our hearts are broken as we gather to mourn the loss of two members of our Florida State University family and offer prayers for those who were injured and affected by this horrific attack. This hateful and despicable act has affected our community profoundly," Florida State President John Thrasher told those assembled.

Authorities say it's not clear why Beierle carried out the attack. Investigators have not discovered any links so far between the gunman and the victims or the yoga studio, Tallahassee Police Chief Michael DeLeo said.

On Saturday, police searched Beierle's home in Deltona and his electronic devices for clues.

Beierle, who was staying at a local hotel before the attack, was visiting the city but was no stranger to Florida's capital. He graduated from Florida State University and police said he had been "the subject of prior calls for service in the Tallahassee area related to harassment of young women."

In videos posted to YouTube in 2014, the man decried interracial relationships, slammed women who wouldn't date him and identified with "involuntary celibates," or "incels," according to The New York Times. CNN has not verified the man in the videos is the gunman.

Records from the first two cases were not immediately available, but the clerk's office said the charge in the 2012 case was dropped, and the 2014 case was disposed of via "other pretrial intervention." A spokesman for the city of Tallahassee said he had no information on the campus arrests.

In a June 1, 2016, case, Tallahassee police responded to the clubhouse of an apartment complex swimming pool where a woman, 19, told an officer that a tenant at the complex had touched her butt, according to a police report.

The victim initially did not want to press charges, the report says, but changed her mind the next day. As detailed in a second police report, the responding officer returned to the complex to view surveillance video, which backed up the victim's allegations.

Beierle was charged with battery. A Leon County clerk record indicates the case was dismissed in May 2017.

In the videos, Beierle recounted instances in which he was rejected by women, The Times reported.

The videos had titles like, "Plight of the Adolescent Male" and "Dangers of Diversity."

According to the newspaper, Beierle was sympathetic toward Elliot Rodger, who killed six people and wounded 14 others in 2014 near the University of California, Santa Barbara. Rodger had written a manifesto in which he lamented his virginity, which he blamed on the "cruelness of women."

Beierle said that as an adolescent he could relate to "this endless wasteland that breeds this longing and this frustration," The Times reported.

Binkley "knew how to work with people in a positive way," her father, Jeff Binkley, told CNN.

"She just radiated love for everybody. You could see her life shines through just about everybody she met. That's consolation to us."

After the Parkland shooting in February, Binkley stood up against gun violence and went to the Florida Capitol to support the Parkland students as they lobbied for change.

The young woman grew up in the Atlanta area and was attending Florida State University, where she was a member of the Delta Delta Delta sorority.

Van Vessem was a veteran physician who "touched countless lives."

A faculty member at Florida State, she was the chief medical director for Florida's Capital Health Plan, the Tallahassee Democrat reported.

In a Facebook tribute, Big Bend Hospice in Tallahassee described her as "a friend and a champion for end-of-life care."