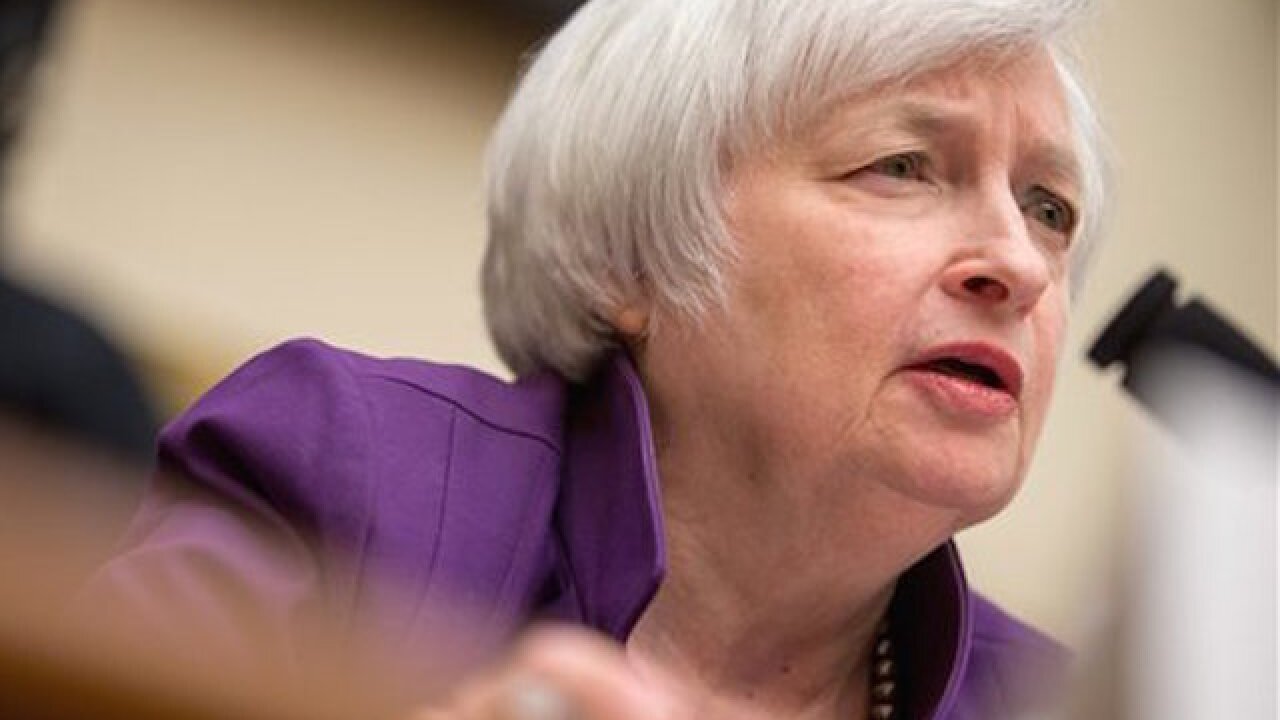 Andrew Harnik
<p>Federal Reserve Chair Janet Yellen testifies on Capitol Hill in Washington, Wednesday, Nov. 4, 2015, before the House Financial Services Committee hearing on banking supervision and regulation. Yellen said Wednesday that the Fed has not made a decision yet on whether to raise a key interest rate in December. She said the move will depend on how the economy performs between now and the Dec. 15-16 meeting. (AP Photo/Andrew Harnik)</p>

WASHINGTON (AP) — The Federal Reserve is keeping interest rates unchanged while noting that near-term risks to the economy have diminished.

The Fed said Wednesday that the U.S. job market has rebounded, with strong job gains in June after a slump in May. But it said in a statement after its latest policy meeting that it still plans to monitor global economic threats and financial developments to ensure that they don't slow the economy.

The central bank gave no hint of when it might resume the rate hikes it began in December, when it raised its benchmark rate from a record low.

Some economists think a hike is possible in September, if hiring remains solid and the turbulence that followed Britain's vote to leave the European Union continues to stabilize.

The decision to leave its key rate unchanged in a range of 0.25 percent to 0.5 percent was approved on a 9-1 vote. Esther George, the president of the Fed's Kansas City regional bank, dissented for the third time this year, arguing for an immediate quarter-point rate hike.

The more positive tone in this statement, compared with the previous statement in April, will likely raise expectations that the central bank could be ready to boost rates at it September meeting if the economy keeps improving.

"Near-term risks to the economic outlook have diminished," the Fed said.

But it repeated a previous pledge to "continue to closely monitor inflation indicators and global economic and financial developments."

A few months ago, it was widely assumed that the Fed would have resumed raising rates by now. But that was before the U.S. government issued the bleak May jobs report and Britain's vote last month to quit the EU triggered a brief investor panic. Since then, though, a resurgent U.S. economy, the bounce-back in hiring and record highs for stocks have led many economists to predict a Fed move by December if not sooner.

In June, employers added 287,000 jobs, the most since October 2015. But uncertainty about the global economic consequences of Britain's exit from the EU remains.

In December, when the Fed raised its benchmark rate from a record low near zero, it also laid out a timetable for up to four additional rate hikes this year. But as 2016 began, intensified fears about China's economy and a plunge in oil prices sent markets sinking and led the Fed to delay further action.

Once the markets stabilized, the Fed signaled a likely rate increase by midyear. Anemic hiring in April and May, though, raised concerns, and it left rates alone. The central bank was also affected by Britain's forthcoming vote on whether to leave the EU, anticipation of which had rattled investors.

When Britain did vote to leave the union and markets sank, some economists even suggested that the Fed's next move might be to cut, rather than raise, rates. Now, though, the pendulum has swung back, especially after the arrival of a reassuring June jobs report. The Standard & Poor's 500 stock index had plunged 5.3 percent in the two trading days after Britain's vote. It has since regained all those losses — and set new highs.

The economy is also picking up after the year's anemic start. Stronger consumer spending is thought to have lifted growth, as measured by the gross domestic product from the January-March quarter to the April-June quarter, with further acceleration expected later this year. In the spring, consumers boosted spending at the fastest pace in a decade. Economists also foresee a lift from business investment, reflecting a rebound from cutbacks in the energy sector.

All that strength might argue for September rate hike, especially if monthly job growth equals as least 200,000 between now and then. Still, the risks of raising rates again too soon and possibly choking off economic activity may seem greater to the Fed than the risks of waiting longer. It has room to accelerate its rate increases if the economy were to heat up so much as to ignite high inflation.

Before Wednesday's statement was issued, according to data from the CME Group, investors foresaw only about a 27 percent probability of a Fed rate hike by September and about a 52 percent chance by December.