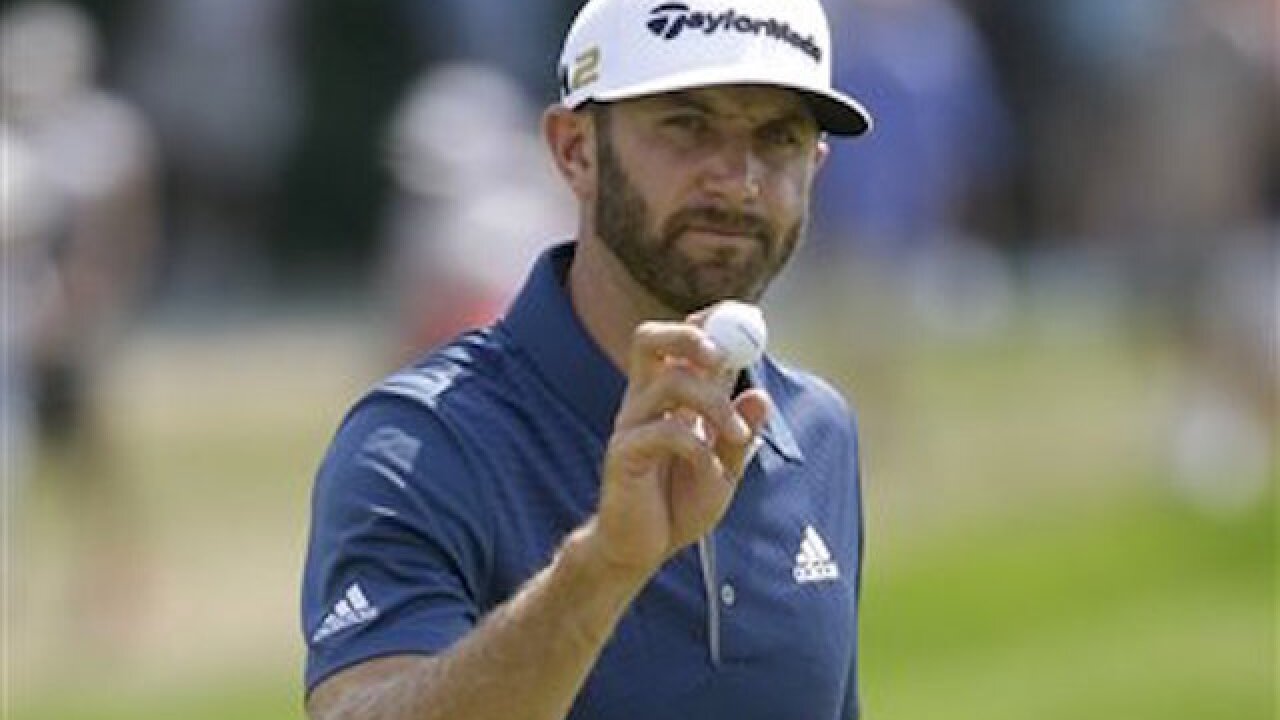 John Minchillo
<p>Dustin Johnson waves after making a putt on the second hole during the final round of the U.S. Open golf championship at Oakmont Country Club on Sunday, June 19, 2016, in Oakmont, Pa. (AP Photo/John Minchillo)</p>

By: Associated Press
Posted at 6:06 PM, Jun 19, 2016
OAKMONT, Pa. (AP) — All the chaos and confusion couldn't stop Dustin Johnson from proving he had the head to be a U.S. Open champion.
One year after the most devastating of all his close calls in the major, Johnson endured two hours of not knowing the size of his lead while the USGA questioned whether he should be penalized one stroke for his ball moving on the fifth green.
Johnson said it didn't. The USGA said it would wait until after the final round to decide.

From this footage #DustinJohnson touched the ball. Isn't that a shot? #USOpen pic.twitter.com/o2xbaUw2CZ

America's most powerful golfer took matters into his own hands Sunday at Oakmont with a 10-foot par save on the 16th hole, a tee shot he smashed down the middle of the 18th fairway and an approach to 5 feet for birdie that left no doubt who won the toughest test in golf.
Only after he was guaranteed that silver trophy did the USGA assess him a one-shot penalty, turning his final score into a 1-under 69 for a three-shot victory.

This is ridiculous... No penalty whatsoever for DJ. Let the guy play without this crap in his head. Amateur hour from @USGA

USGA they roll the greens 3 times. Double cut them. What else could cause it to move. How bout gravity!! So bad it's sickening

The lingering question was whether this U.S. Open was tougher than it needed to be.
Johnson had a short par putt on the fifth hole, took a few practice strokes and as he placed the putter behind the ball, it moved slightly — backward. Johnson stepped back and called over the rules official, told him it didn't move and he tapped in for par.
The USGA later decided to review it, and the timing was peculiar.
Johnson was in deep rough left of the 10th fairway when he was given relief from a television tower in his line-of-sight to the flag. He was able to move left toward the 11th fairway and drop it in the first cut of rough, and he powered it over the tower and onto the green, setting up a par. It was a huge break — within the rules — the kind that major champions often get.
One hole later, the USGA informed they had questions about the ball moving on No. 5.
"After looking at video, the actions he took could have caused the ball to move," said Jeff Hall, director of rules and open championships for the USGA. "We asked if there was some other reason the ball could have moved. He didn't state a reason."
The USGA wanted him to know that a one-shot penalty was likely so he could play accordingly, but it led to confusion over the back nine — for Johnson and for the players trying to catch him.
Shane Lowry, who began the final round with a four-shot lead that he lost on the front nine, caught him when Johnson made his only bogey on the back nine. Were they tied? Was Johnson one shot behind? No one knew.
Johnson played through it all, thinking only of that silver trophy that got away from him at Chambers Bay last year when he had a 12-foot eagle putt to win and then three-putted for par to lose by one to Jordan Spieth.
Lowry, the first player since Payne Stewart at The Olympic Club in 1998 to lose a four-shot lead in the final round of the U.S. Open, lost his putting touch that had carried him to the lowest 54-hole total at Oakmont. He three-putted from long range on three straight holes, and Johnson was flawless at the end.
Johnson finished at 4-under 276.
He gave three quick fist-pumps when the birdie putt fell on the 18th, hugged his brother, Austin, who caddies for him and scooped up his son Tatum on Father's Day.
Among the first to greet him was Jack Nicklaus, who won his first major at Oakmont in 1962. The gold medal for the winner is named after Nicklaus.
Copyright 2016 The Associated Press. All rights reserved. This material may not be published, broadcast, rewritten or redistributed.