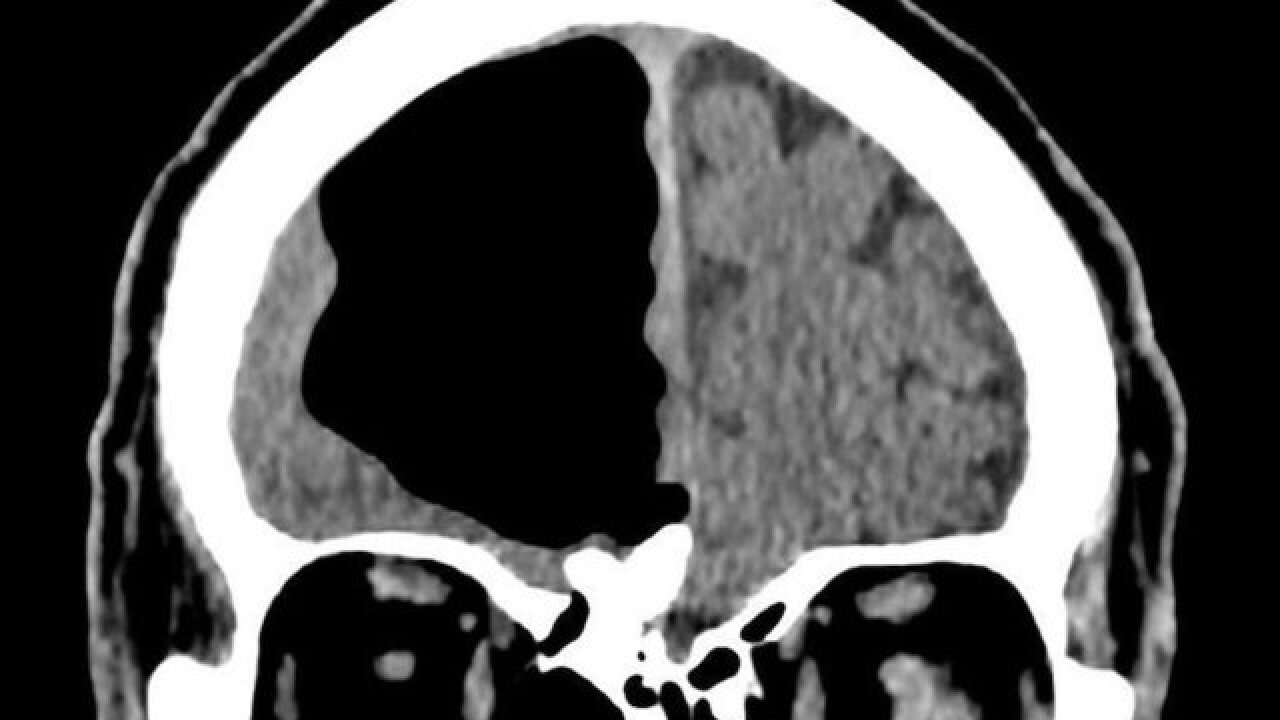 Copyright 2018 Scripps Media, Inc. All rights reserved. This material may not be published, broadcast, rewritten, or redistributed.
BMJ Case Reports 2018
<p>A CT scan of the man's head revealed a large air cavity compressing his right frontal lobe. The condition is known as pneumocephalus.</p>

Doctors treating a patient who had complained of repeatedly losing his balance made an unexpected discovery: The 84-year-old man had a 3½-inch pocket of air in his brain.

The man had been referred to the emergency room by his primary physician in Northern Ireland.

"The thing I was most concerned about in an elderly patient with new onset limb weakness and balance disturbance was some form of stroke," said Dr. Finlay Brown, a leading author of the report and a general practitioner in Belfast who treated the man.

The physicians performed scans of the brain to identify any signs of bleeding or brain damage caused by blocked blood vessels, according to Brown.

But what they found was much more unusual.

A computed tomography scan of the patient's brain showed a large pocket of air -- also called a pneumatocele -- in the patient's right frontal lobe that was approximately 3½ inches long.

"We knew immediately that there was something very abnormal," Brown said. "Initially, we thought perhaps the patient hadn't disclosed having previously had some form of operation or a congenital abnormality, but ... he confirmed he hadn't."

The air pocket was right behind the frontal sinus and above the cribriform plate, which separates the nasal cavity from the cranial cavity.

"This was a rare presentation in this guy of a lot of air in his brain," said Dr. Alan Cohen, professor of pediatric neurosurgery at Johns Hopkins Hospital, who was not involved in the case report.

When pneumatoceles are present in the brain, the condition is often referred to as pneumocephalus. They most commonly compress the frontal lobe, which plays a large role in voluntary muscle movement, Cohen said.

An MRI of the man's brain also showed a small benign bone tumor, or osteoma, that had formed in the man's paranasal sinuses and was eroding through the base of the skull, causing air to leak into the cranial cavity, according to the report.

"It's kind of like an inverted Coke bottle," Cohen said. "Sometimes, there can be a one-way valve, and air comes in and can't get out."

The pressure from the air cavity may have also caused a small stroke in the patient's frontal lobe, resulting in the left-side weakness and gait instability that prompted his hospital visit, according to Brown.

"After discussion with the stroke specialists, it was felt that his small stroke was most likely secondary to the compressed effect the air pocket was having on his brain's blood supply, leading to a lack of blood and subsequent stroke," Brown said.

According to a 2015 study in the journal Surgical Neurology International, trauma is responsible for approximately 75% of pneumocephalus cases. The remaining cases are often complications of neurosurgery; ear, nose, and throat surgery; sinus infections; or, as in this case, bone tumors.

Treatment for pneumocephalus depends on several factors, particularly the symptoms involved. Many cases of pneumocephalus have no symptoms and eventually become absorbed by the body without treatment, according to Cohen.

In more serious cases, such as those that cause high blood pressure in the brain or impaired consciousness, decompression surgery to alleviate pressure on the brain may be required.

In this case, the patient was offered surgical treatment from a team of neurosurgeons and ENT surgeons. The procedure would have involved temporary surgical removal of part of the frontal bone of the skull and excision of the bone tumor to close the leak that was sending air into the brain.

However, due to his age and other health factors, the patient declined surgery and instead chose conservative treatment involving medication to prevent a secondary stroke.

"We managed the patient with his acute stroke and kept him comfortable while awaiting specialist input," Brown said.

When the patient returned for a 12-week followup visit, he felt better and no longer complained of left-side muscle weakness, according to the report.

"It is very unlikely I will ever see the same findings again in another patient," Brown added. "But it does encourage doctors to have a low threshold for imaging even when facing very common presenting symptoms."

Due to a lack of studies evaluating pneumocephalus, the exact prognosis for the patient remains unclear.

"The question in this fellow's case is, we don't know if, over time, more air is getting in than getting out, which would cause neurologic instability," Cohen said.

"You can get by pretty well with just a limited amount of cerebral cortex. Sometimes, it gets reorganized, and nature is pretty clever in terms of finding ways to heal."