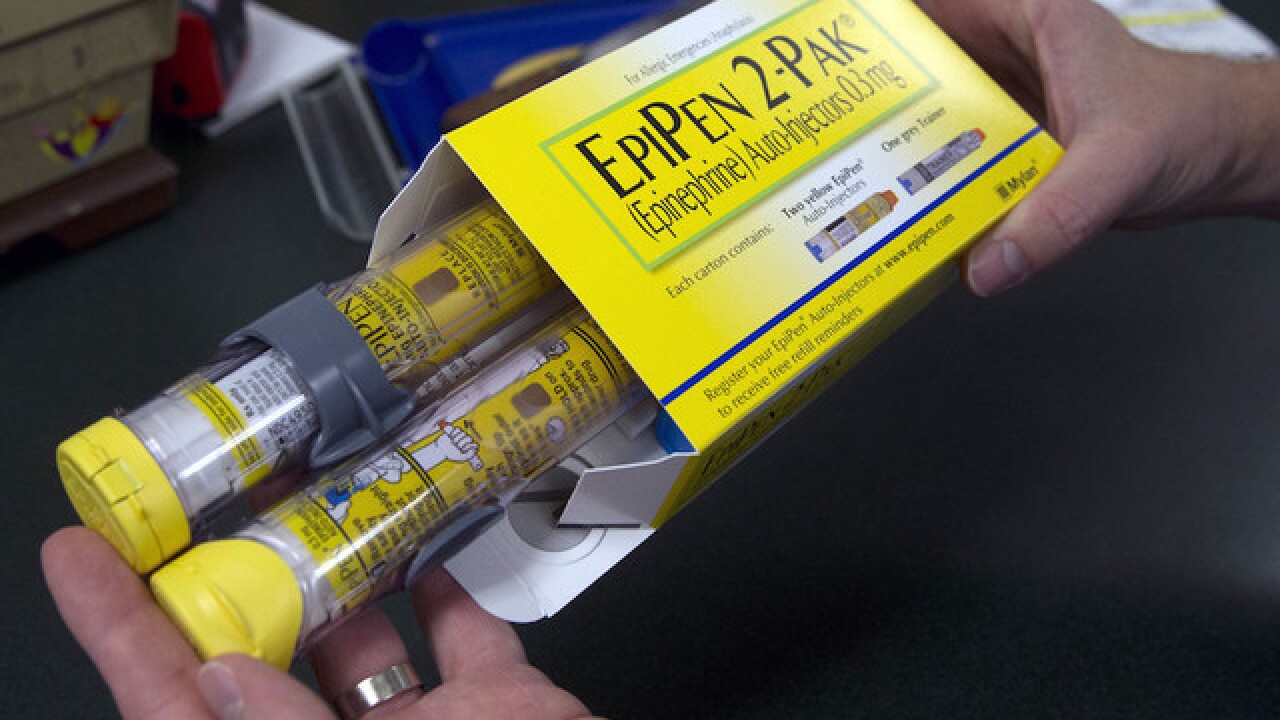 Rich Pedroncelli
<p>In this Friday, July 8, 2016, photo, pharmacist Clint Hopkins, owner of Pucci's Pharmacy, displays a package of EpiPens, an epinephrine autoinjector for the treatment of allergic reactions, in Sacramento, Calif. Frustrated by the rising cost of prescription drugs, health advocates hope sunlight and a dose of shame might discourage drugmakers from raising their prices too quickly or introducing new medications at prices that break the bank. (AP Photo/Rich Pedroncelli)</p>

U.S. Presidential candidate Hillary Clinton took to Facebook today to say the makers of the EpiPen are gouging consumers.

How EpiPen's maker raised prices, and hackles, so much (From the AP)
Sky-high price hikes for EpiPen, the injected emergency medicine for severe allergic reactions to foods and bug bites, have made its maker the latest target for patients and politicians infuriated by soaring drug prices.

The company, Mylan, has a virtual monopoly on epinephrine injectors, potentially life-saving devices used to stop a runaway allergic reaction. Mylan N.V., which has headquarters in Hertfordshire, England, and Pittsburgh, has hiked prices as frequently as three times a year over the past nine years, pushing its list price for a package of two syringes to more than $600.

RELATED: How to find a more affordable EpiPen

A look at the situation:

Q: Who uses EpiPens?
Roughly 40 million Americans have severe allergies to spider bites, bee stings and foods like nuts, eggs and shellfish. They at risk for a serious reaction — anaphylactic shock. Symptoms quickly escalate from wheezing, hives and skin swelling to rapid heartbeat, trouble breathing and convulsions and, without treatment, possibly death.

As a precaution, many carry EpiPens, which contain the best "antidote," the hormone epinephrine. Last year, more than 3.6 million U.S. prescriptions for two-packs of EpiPens were filled, according to data firm IMS Health. That earned Mylan nearly $1.7 billion.

Q: How do EpiPens work?
A: In an emergency, the syringe is jabbed against the thigh. The needle inside injects the epinephrine into muscle tissue. But that can be difficult in a panic or with a child who won't hold still. The syringes expire after a year.

Q: How did the price for EpiPens get so high?
Like all drugmakers, Mylan periodically hikes its prices. In 2007, when Mylan took over rights to EpiPen, a pair of syringes cost $93.88. According to Elsevier Clinical Solutions' database of prices set by manufacturers, Mylan raised the price 5 percent the in 2008 and 2009, when a competitor hit the market. Its price jumped 20 percent in late 2009, followed by a series of 10 percent and 15 percent increases. The price hit $609 per pair in mid-May.

Q: How can Mylan do that?
A: In the U.S., drug manufacturers charge what they think the market will bear. Unlike other countries, the U.S. government doesn't regulate drug prices, though the Veterans Affairs and Medicaid negotiate big discounts. Mylan hasn't answered questions about how it justifies its price hikes. A statement released Monday didn't address prices.

Q: What do people really pay?
A: It depends on an individual's insurance coverage. Private insurers often negotiate discounts off the list price, and patient out-of-pocket costs vary by plan. But patients with high-deductible plans or no insurance can pay list price or more, depending on the pharmacy. In its statement, Mylan said most customers have insurance that limits their copayments, or they can use a copay discount card to save $100.

The statement recommended that people review their coverage. It also says that since 2012, Mylan's EpiPen4Schools program has given schools more than 700,000 free EpiPens.

Q: Isn't there any competition?
A: Barely, and few people know about it. One cheaper product remains on the market, Adrenaclick. But EpiPen, introduced in 1987, is so well known that most doctors prescribe it without considering Adrenaclick, and pharmacists can't substitute that for EpiPen, said Evelyn Hermes-DeSantis, director of drug information services at Rutgers University's pharmacy school. A pair of Adrenaclick syringes costs $142 to $380 at pharmacies, according to online comparison sites.

EpiPen has a U.S. patent giving it a monopoly until 2025, according to Evercore ISI analyst Umer Raffat. Generic maker Teva has permission to launch a version but hasn't gotten regulatory approval yet. A rival injector called Auvi-Q was recalled last year because of potential inaccurate dosing, Raffat noted, and a third product has twice been rejected because of issues with the injector.

Q: Is there another alternative?
A: Some people get prescriptions for epinephrine vials and get a doctor to put it in syringes. But Rutgers' Hermes-DeSantis said that raises concerns about sterility and proper storage.

Q: Why is there such a furor now?
A: Drug prices are a hot topic in the presidential race, and Congressional committees have been investigating eye-popping increases by other companies. New drugs for cancer and rare diseases can cost hundreds of thousands of dollars and older drugs, even some generics, have had unprecedented price spikes. With the increase in high-deductible insurance plans, more people are paying the full cost of prescriptions. And the back-to-school season means some families are facing sticker shock as they buy new EpiPens to keep at their child's school.