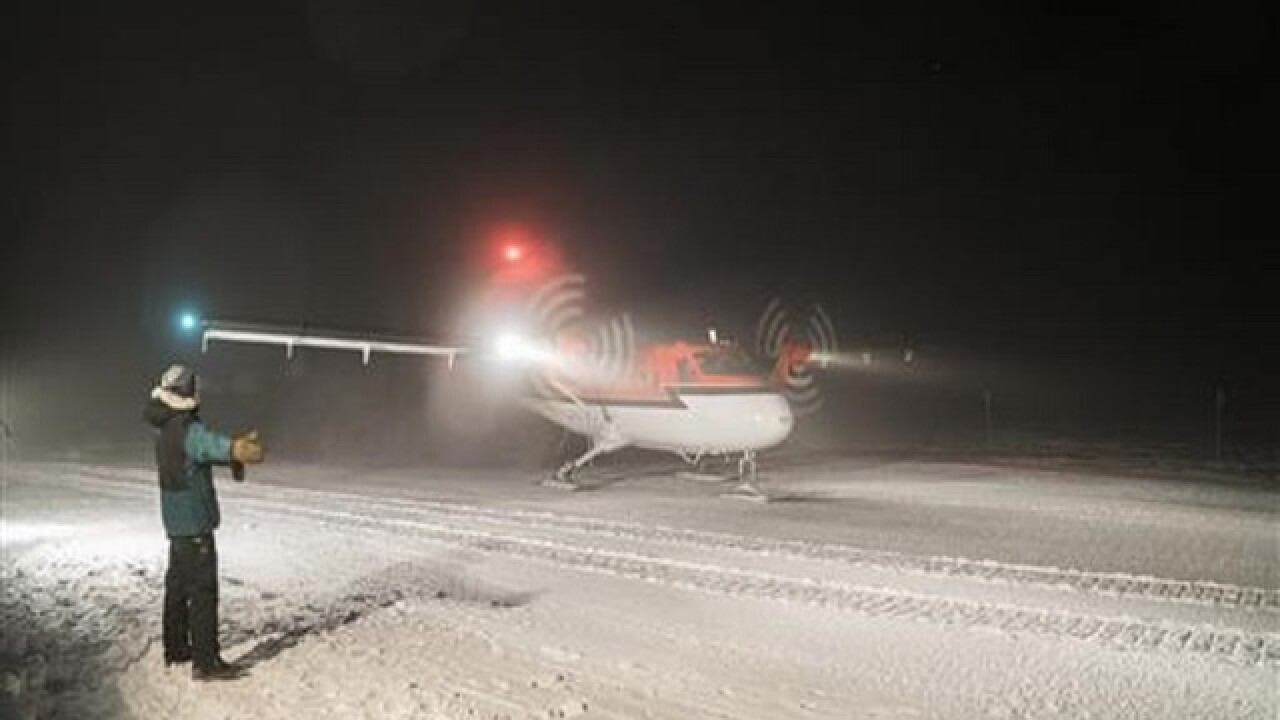 By: Associated Press
Posted at 11:44 PM, Jun 22, 2016
SANTIAGO, Chile (AP) — Two people who fell ill while working at the U.S. research station at the South Pole have been evacuated by a small plane that made the daring rescue flight in Antarctica's harsh winter.
The National Science Foundation said the two workers arrived safely late Wednesday in Punta Arenas, the southernmost city in Chile, after a long trip from the Amundsen-Scott station at the South Pole. They stopped for a few hours at a British station on the edge of Antarctica to be put on another plane.
"From Punta Arenas, the two patients aboard will be transported to a medical facility that can provide a level of care that is not available at Amundsen-Scott," said a statement on the National Science Foundation's Facebook page.
The two were taken to a clinic in Punta Arenas, but it wasn't clear if that was the facility the foundation referred to.
The foundation, which runs Amundsen-Scott and two other centers in Antarctica, said it was not disclosing the location of the medical facility. It also did not identify the sick workers or give their conditions, citing medical privacy. They were described only as seasonal employees of Lockheed Martin, which is the prime contractor for operations and research support for the foundation's Antarctic program.
In a hectic two days of flying, the rescue team flew 3,000 miles roundtrip from Britain's Rothera station to the South Pole and returned to Rothera with the sick workers Wednesday afternoon, said Peter West, spokesman for the National Science Foundation. The workers were transferred to a second Canadian-owned Twin Otter plane for the flight to Punta Arenas.
At Rothera, the temperature was a balmy 27.5 degrees (minus 2.5 Celsius) Wednesday afternoon. That was toasty compared to the South Pole where it was minus 75 (minus 60 Celsius) in the morning.
Before they left, there were 48 people — 39 men and nine women — at the Amundsen-Scott station for the winter.
Normally planes don't go to the U.S. polar outpost from February to October because of the dangers of flying in the pitch-dark and cold. The first day of winter in the Southern Hemisphere was Monday — the sun will not rise at the South Pole until the first day of spring in September.
Steve Barnet, who works with a University of Wisconsin astronomy team at the polar station but is in the U.S. now, lauded the rescue crew.
"The courage of the pilots to make the flight in extremely harsh conditions is incredible and inspiring," Barnet wrote in an email.
The extreme cold affects a lot of things on planes, including fuel, which needs to be warmed before takeoff, batteries and hydraulics, West said. The Twin Otter can fly in temperatures as low as minus 103 degrees (minus 75 degrees Celsius), he said.
"The air and Antarctica are unforgiving environments and punishes any slackness very hard," said Tim Stockings, operations director for the British Antarctic Survey. "If you are complacent it will bite you."
"Things can change very quickly down there" with ice from clouds, high winds and snow, he said.
The station has a doctor and a physician's assistant and is connected to doctors in the U.S. for consultation, West said, but sometimes workers need medical care that can't be provided at the South Pole. There have been three emergency evacuations from Amundsen-Scott since 1999.
The 1999 flight, which was done in Antarctic spring during slightly better conditions, rescued the station's doctor, Jerri Nielsen, who had breast cancer and had been treating herself. Rescues also were done in 2001 and 2003, both for gallbladder problems.
Scientists have had a station at the South Pole since 1956. It does astronomy, physics and environmental science with telescopes, seismographs and instruments that monitor the atmosphere. The foundation runs two other research stations in Antarctica.
Copyright 2016 The Associated Press. All rights reserved. This material may not be published, broadcast, rewritten or redistributed.