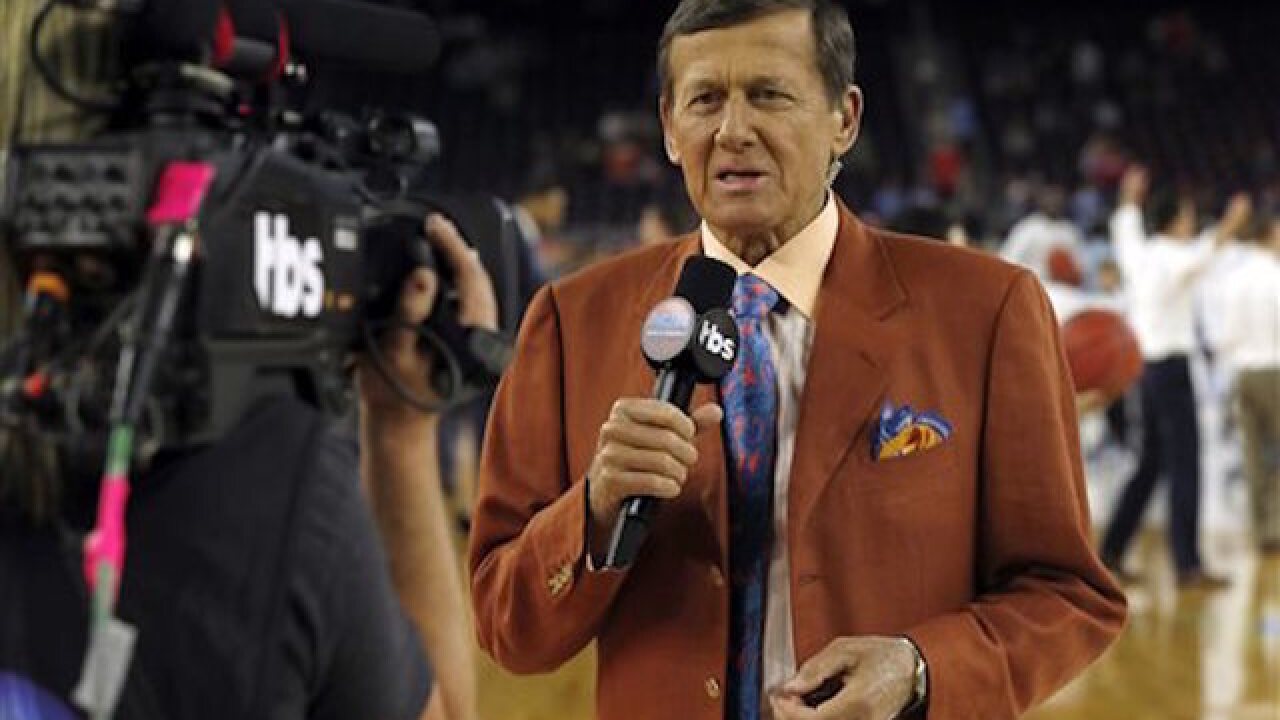 David J. Phillip
<p>FILE - In this April 4, 2016, file photo, Craig Sager speaks before the NCAA Final Four tournament college basketball championship game between Villanova and North Carolina in Houston. Sager will receive the Jimmy V Perseverance Award at the ESPYS on July 13. Sager has continued to work as he receives treatment for leukemia. The award is named for the late North Carolina State coach and broadcaster Jim Valvano, who gave his famous ìDonít ever give upî speech at the 1993 ESPYS while battling cancer. (AP Photo/David J. Phillip, File)</p>

Craig Sager keeps a copy of Jim Valvano's 1993 ESPYS speech on his phone. He would play it back sometimes during those long days in the hospital receiving treatment for leukemia.

"It just shows it's not about me; it's about something bigger than me," Sager told The Associated Press on Tuesday about ESPN recognizing a commentator from another network. "What I represent is somebody who, like Jimmy V said, 'Don't give up. Don't ever give up.'

Sager and Valvano became close when they worked together on basketball at the 1991 Pan American Games in Cuba. Sager recalled that he didn't realize until he saw that speech at the 1993 ESPYS how ill Valvano was — the former North Carolina State coach died less than two months later. Yet as weakened as Valvano was physically by the cancer, he still summoned the power for that riveting speech.

The 64-year-old Sager has kept up his fight with cancer in the public eye. He has continued working NBA games even while undergoing clinical trials at the University of Texas MD Anderson Cancer Center in Houston. The leukemia cells are still in his system, Sager said, "but it's not growing at an alarming rate."

He was first diagnosed with leukemia in 2014 and announced in March that he was no longer in remission.

On Monday, Sager attended practices for the Western Conference finals then went to a hospital for the transfusions he needs twice a week. The Thunder's doctors are helping to arrange the treatment.

TNT announced on its pregame show Tuesday night that Sager would be honored at the ESPYs on July 13. His colleagues wore paisley ties that Heat star Dwyane Wade is selling to raise money to combat blood cancers. They also promoted "Sager Strong" socks with the image of a cartoon Sager in a purple suit — just like he was wearing Tuesday for his latest colorful ensemble.

"There's just no way I was going to miss the game tonight," Sager said earlier.

He'll fly back home to Atlanta on Wednesday morning to see his doctors, then out to California that night for Game 5. After TNT's playoff coverage ends, Sager is scheduled for eight days of chemotherapy in Houston starting June 6. He undergoes the treatment once every three weeks, and this will be his fifth cycle out of six.

The sixth cycle is scheduled for July, before he plans to head to Rio to cover basketball at the Olympics for NBC.