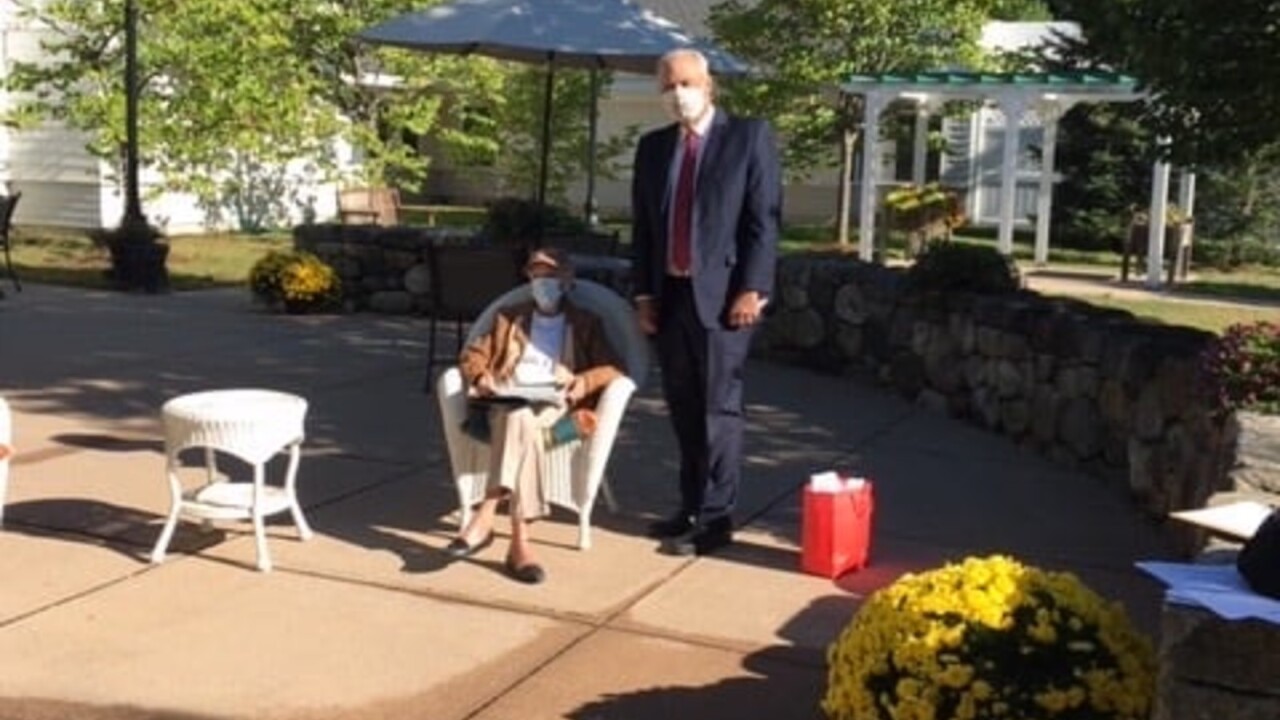 Mayor Joe Petty/Facebook
Gerri Schappals received the key to Worcester, Massachusetts from Mayor Joe Petty on September 21, 2020. Schappals survived the Spanish Flu, 2 bouts with cancer and COVID-19 in her 102 years of life.

A 102-year-old woman in New Hampshire survived COVID-19 earlier this summer. Which is a remarkable feat as America marks about 200,000 deaths from the coronavirus. What makes Mildred Geraldine “Gerri” Schappals' survival more incredible is that she survived the Spanish Flu when she was an infant, then 2 bouts with cancer later in life.

Schappals was born in Worcester, Massachusetts, and when she was just 11 months old, her mother, brother and her came down with the Spanish Flu in 1918.

Her brother had a milder case and recovered, but the doctor was worried about Schappals and her mother. However, they pulled through. Family lore says the doctor cried when her and her mother recovered, being some of the only patients he had that survived the Spanish Flu.

“I really think that having the 1918 flu strengthened everything about me,” Schappals told The Washington Post, through her daughter, Julia. “I never had colds or illnesses until I got cancer, and even then I pulled through. It’s either that or Mother Nature thinks I died in 1918, so she ignores me.”

Schappals went on to graduate from college and became a teacher. She had two daughters and became a widow in 1983. During retirement, she battled cancer, according to WHDH, first breast cancer and then colon cancer.

Then came 2020. Schappals is the oldest resident at her assisted-living community, Huntington at Nashua, in New Hampshire and turned 102 in January.

In May, she wasn’t feeling well and she spiked a fever. She was taken to the hospital and given a coronavirus test. By the time it came back positive, Schappals was feeling better.

“The story goes,” Julia Schappals told The Telegram, “that she came back into the (assisted living) facility and said, ‘I feel great. When’s lunch?’ And she’s felt fine ever since then.”

Schappals credits her longevity to her faith and love of wine, according to her daughter Schappals often said “Jesus did not change water into wine at Cana so we could look at it.”

As for being healthy, Schappals family says the 102-year-old “would probably run for her life from a carrot so she could get to a cookie. I think she lived on crackers and cheese and hamburgers.”

This week, the mayor of Worcester, Massachusetts drove to Nashua to deliver a key to the city to Schappals in recognition of her history and survival.