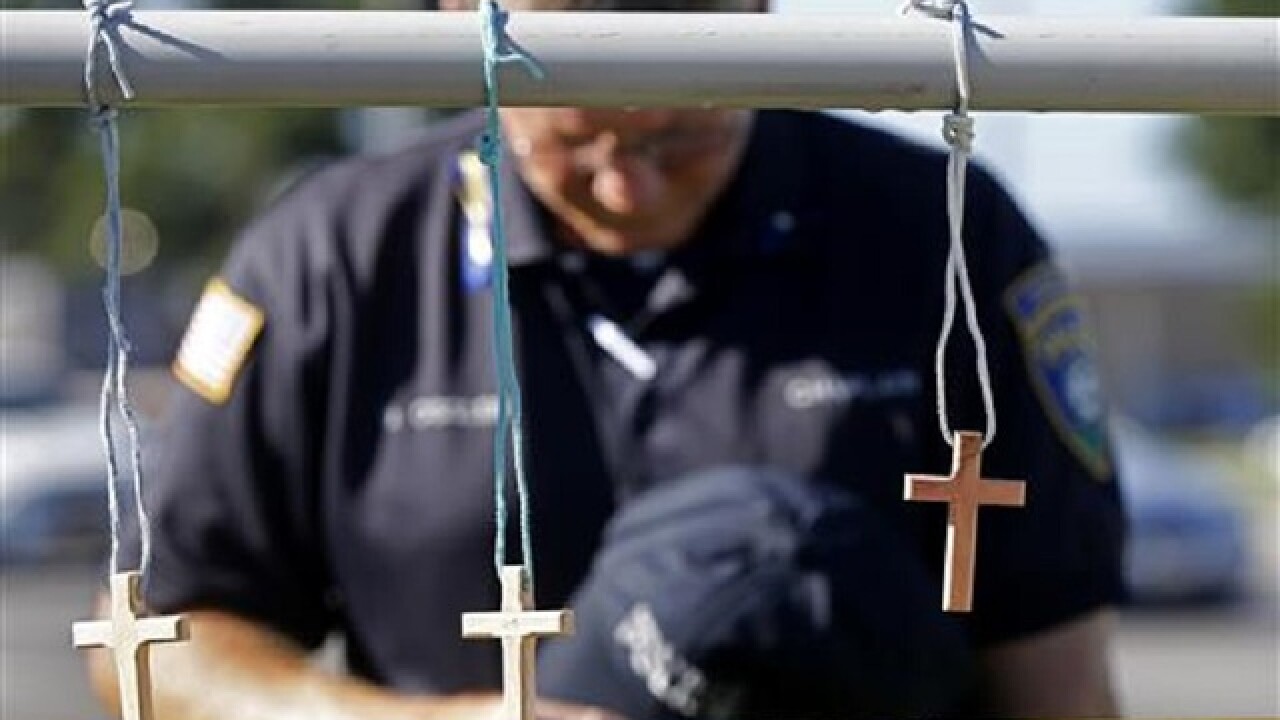 Hundreds attended a rally Tuesday night supporting law-enforcement officers at police headquarters, about a mile from where the officers were shot to death Sunday morning.

Police Lt. Robert McGarner struggled to keep his emotions in check as he stepped to the microphone to address the crowd.

"Y'all realize what this means to us?" McGarner asked. Later, officers bowed their heads as a bugler played taps.

Just down the street, on a corner across from the police station, black activist Redell Norman and a handful of supporters who have protested the police shooting of Alton Sterling held a smaller demonstration that included Black Lives Matters signs and forms for anyone who wanted to register to vote.

"It's protest with a purpose," Norman said.

More than 100 people with Together Baton Rouge held signs bearing the words "We refuse to be divided."

"Unless relationships are established, there will be no changes. Police officers need to get out of their cars and have one-on-one conversations with people in their community," said the Rev. Lee Wesley, who is black.

Funeral arrangements for two of the officers have been made public: Montrell Jackson, 32, a 10-year police force veteran with a newborn at home, will be laid to rest Monday. Visitation for Matthew Gerald, 41, an Iraq war veteran who became a Baton Rouge police officer less than a year ago, will be held Thursday and Friday. The funeral will be held Friday.

Arrangements for Brad Garafola, 45, an East Baton Rouge Parish sheriff's deputy and a father of four, have not been made public.

The three are among 10 law enforcement officers killed over a span of 10 turbulent days around the country by attackers — at a protest march in Dallas, a courthouse in Michigan and now a convenience store in Baton Rouge.

Even as Baton Rouge was mourning the three officers, news came Tuesday that a police officer in Kansas City, Kansas, was shot and killed while sitting in his patrol car.

The officers lived in the area of Denham Springs, a quiet bedroom community across the Amite River from Baton Rouge, which has been in turmoil for two weeks. Tensions rose sharply after the death of Sterling, 37, a black man killed by white Baton Rouge officers after a scuffle at a convenience store. The killing was captured on cellphone video, sparking widespread protests against police treatment of the African-American community.

One of the people paying his respects Tuesday to law enforcement officers was LSU football coach Les Miles, a prominent figure in a city where the Tigers' purple and gold colors can be seen flying everywhere.

LSU spokesman Michael Bonnette confirmed the visits with authorities after the coach was seen by The Associated Press entering police headquarters. He spent more than an hour there.

Bonnette says Miles wanted to express his support and discuss his appreciation for the courage police show in putting their lives on the line to protect their communities.

In Washington, President Barack Obama met with Attorney General Loretta Lynch, FBI Director James Comey and Homeland Security Secretary Jeh Johnson. He said after the meeting that what happened in Baton Rouge is a reminder of the extraordinary risks and dangers that law enforcement officers take every day "to protect us and our way of life."

The president said he will use his remaining months as president to figure out which practices work best and how to help rebuild trust between police and the communities they serve.