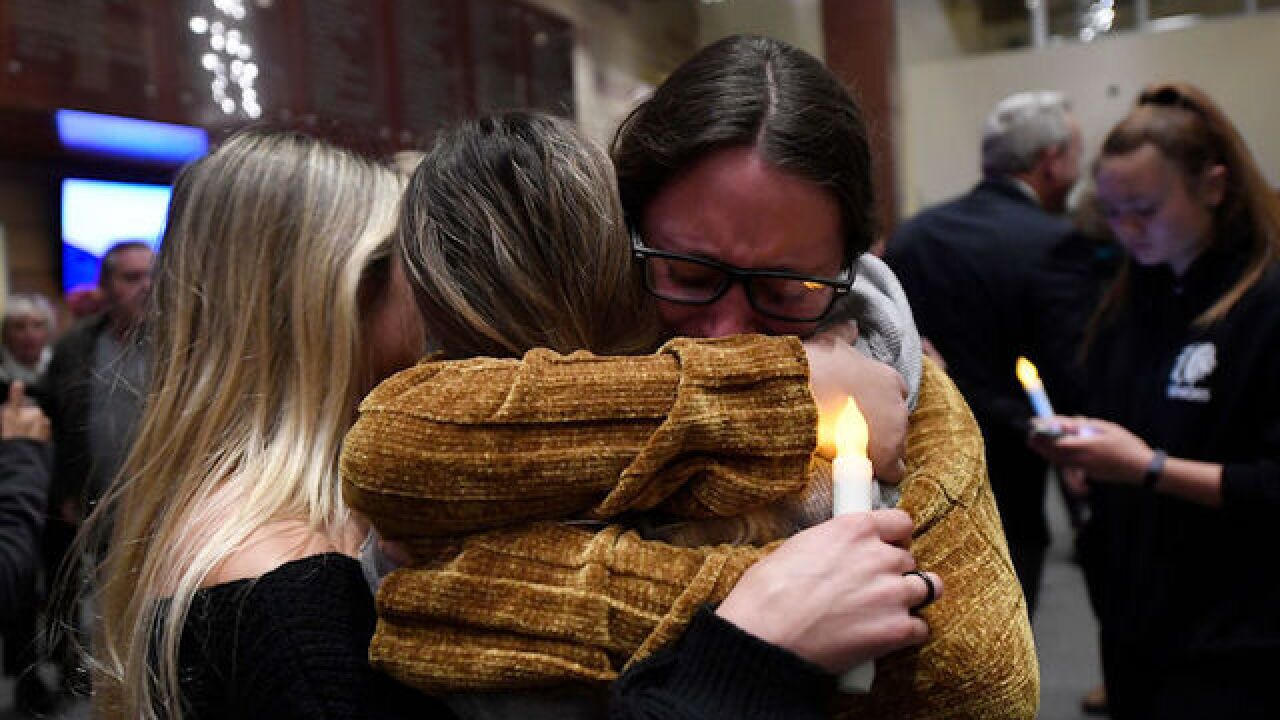 Image copyright 2018 Getty Images. All rights reserved. This material may not be published, broadcast, rewritten, or redistributed.
Kevork Djansezian
<p>Mourners cry and during a vigil for the victims of the mass shooting at the Thousand Oaks Civic Arts Plaza on November 8, 2018 in Thousand Oaks, California. Twelve people including a Ventura County Sheriff sergeant and the gunman died in the mass shooting at Borderline Bar and Grill .</p>

Authorities have identified a Facebook post believed to have been made by the gunman who killed 12 people at a bar in California, a law enforcement official said.

Long is believed to have posted the social media message around the time of the attack, according to the official, who is familiar with the investigation.

In it, the writer says: "I hope people call me insane ... (laughing emojis).. wouldn't that just be a big ball of irony? Yeah ... I'm insane, but the only thing you people do after these shootings is 'hopes and prayers'.. or 'keep you in my thoughts'... every time... and wonder why these keep happening. "

When CNN read the post to a friend of Long's, who did not want to be publicly identified, the friend said, "That does not sound like Ian to me at all. I don't know what was going through his head when he wrote this. It must have been terrible."

Hours after Long was found dead, apparently from a self-inflicted gunshot wound, police searched for clues at the home where he lived with his mother.

Long served in the Marines for nearly five years as a military machine gunner and was deployed to Afghanistan, Defense Department records show.

Police were called to his home in April for reports of a disturbance and a crisis team felt he might be suffering from post-traumatic stress disorder, but they ultimately cleared him.

Authorities are working to piece together a timeline on the shooting. But they have said when they arrived at the scene, the suspect was still firing. Sheriff's Sgt. Ron Helus and a highway patrol officer rushed into the bar and exchanged gunfire with the shooter, Ventura County Sheriff Geoff Dean said.

Helus was fatally shot and an officer pulled him out and waited for reinforcements, he said.

Police waited close to 15 minutes, until the shots died down, and regrouped with more officers, Dean said. They went into the bar and found the shooter had fatally shot himself next to the bar entrance.

The scene was "like hell" when deputies arrived, Dean said. Police found patrons hiding in the attic. Some were so terrified, they asked officers to confirm they weren't the gunman, he said.