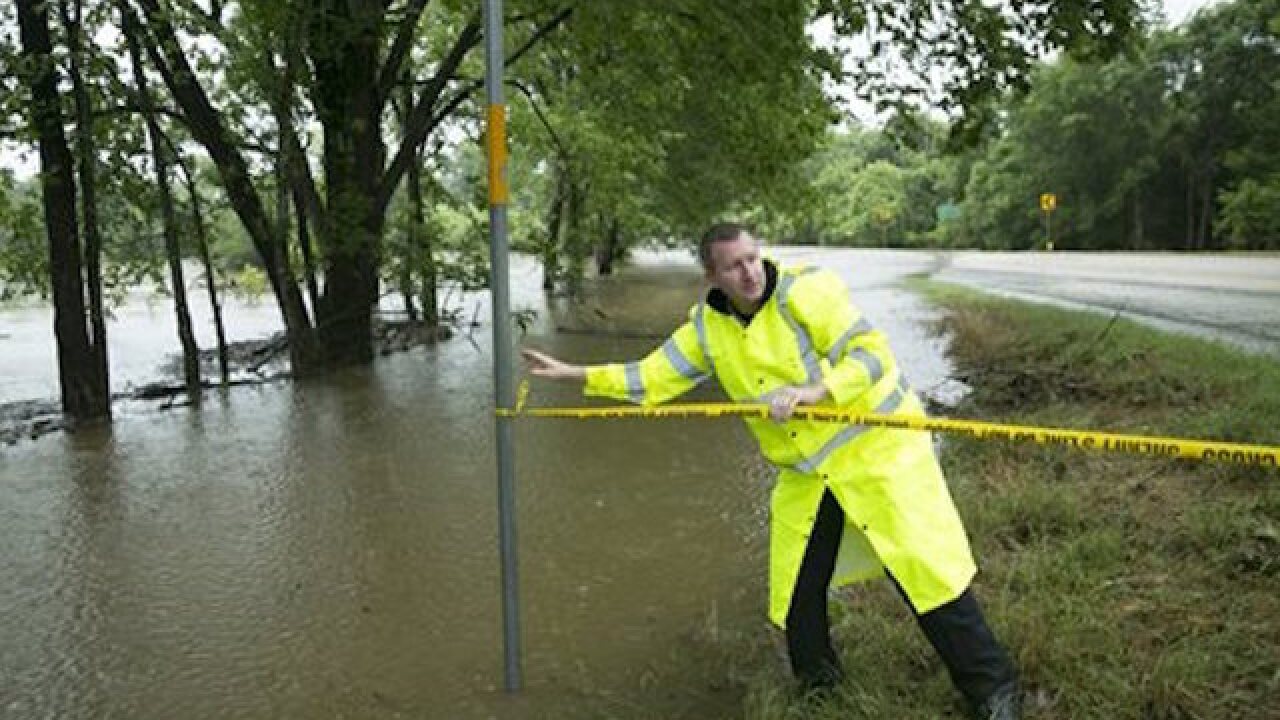 Copyright Associated Press
Jay Janner
<p>Bastrop County Sheriff Deputy John Deason closes FM 153 at River Bend Road, Friday, May 27, 2016, near Smithville, Texas, after flooding covered the road. At least one person has died in Texas and three are missing after torrential rain caused floods that closed roads and schools, prompted evacuations, damaged homes and forced dozens of students to spend the night on campus, officials said Friday as they braced for more rains later in the day.(Jay Janner/Austin American-Statesman via AP)</p>

BRENHAM, Texas (AP) — At least one person has died in Texas and three are missing after torrential thunderstorms caused floods and at least one tornado that closed roads and schools, prompted evacuations, damaged homes and forced dozens of students to spend the night on campus, officials said Friday as they braced for more rain over the Memorial Day weekend.

"It's not going to take very much rain to get us in those flood stages again," said Washington County Judge John Brieden.

Brieden said that in Washington County, located between Austin and Houston, one person has drowned and another person was missing after their vehicle was swept away. An Austin-area official has said two people were missing from a vehicle there.

Brieden, who didn't release details on the circumstances of the drowning, said they had not yet determined if a second person who died in Washington County had died from drowning or a heart attack.

Mobile homes washed away in the flooding and multiple houses had water inside, he said. Brieden said there have been more than 50 water rescues from houses and vehicles since the rains started Thursday morning. He said that at one point officials had nine boat teams out rescuing people.

"We had one guy that got out of his vehicle and managed to hang on to a tree while the vehicle washed away," Brieden said, adding the man was in the tree for a couple of hours before being rescued by a boat crew.

He said some people in homes had to evacuate through windows to be rescued.

"What we got was more and more rain, harder and harder rain," said Brieden.

He said about 40 children spent the night at a Brenham elementary school after buses were unable to get them home. He said that in some areas buses couldn't get down flooded roads. A couple of buses had to be rescued as one broke down and another was trapped when waters rose nearby.

Bastrop County Judge Paul Pape said Friday that about 100 homes in the county near Austin were damaged and there could be more. He says more than 100 county roads are barricaded and some roads had washed out. He said about 50 homes were evacuated overnight.

The damage prompted Pape to issue a disaster declaration for Bastrop County.

Pape said this is the fifth disaster declaration he's issued since the Memorial Day weekend in 2015. Four were for flooding and one was for fire damage.

"I've lived here 33 years and that's the most disaster declarations we've ever had in a 12 month period," he said.

The National Weather Service said it determined that an EF-1 tornado damaged homes on Thursday in a neighborhood in Bryan, located about 100 miles northwest of Houston.

"I didn't even know there was a tornado until I got here. Then I had no roof on top of my living room." Patty Ponzio told KHOU-TV. Her home was one of several heavily damaged in Bryan.

Lisa Block, an emergency services spokeswoman in Travis County, which includes Austin, said up to 9 inches of rain fell in parts of the county overnight. Residents in one neighborhood were asked to evacuate their homes, while those in another were advised to shelter in place, she said.

In Travis County, nine people were rescued by helicopter from homes and vehicles. Block said they included four adults and a child who climbed onto the roof of their Austin-area home as the floodwaters rose and were hoisted to safety.

Video from the county's aerial emergency medical service of some of the rescues showed people who had climbed to their homes' roofs being pulled up to a rescue helicopter flying above their houses, which were surrounded by water.