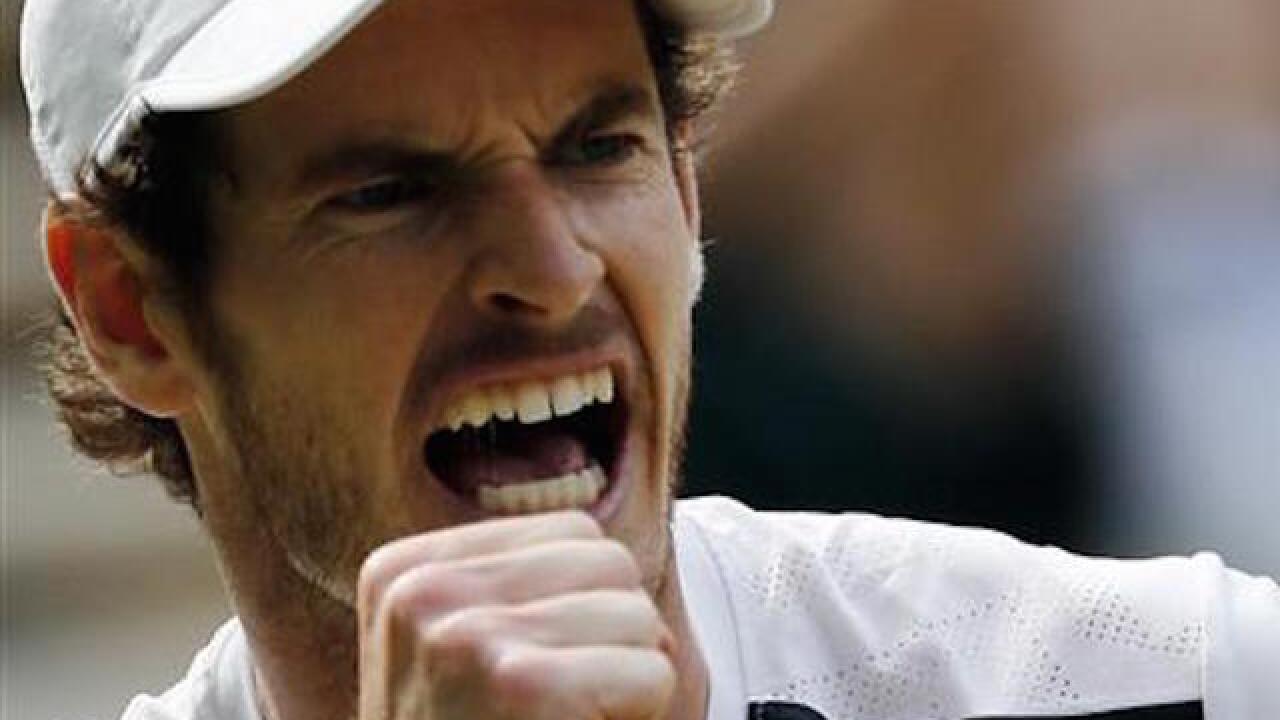 LONDON (AP) — After Britain famously endured a 77-year wait between Wimbledon men's champions, Andy Murray has given the host country a pair of titles in quick succession.

Murray dulled booming serves with quick-reflex returns, played impressively mistake-free tennis while coming up with daring passing shots and beat Milos Raonic 6-4, 7-6 (3), 7-6 (2) on Sunday for his second trophy at the All England Club since 2013 and third Grand Slam championship overall.

When he sat in his sideline chair after it was over, Murray wiped away tears with a tournament towel.

"Last time, I was so relieved. I felt ... just so much stress and pressure and didn't really get the chance to enjoy it as much," Murray said. "So I'll make sure I enjoy this one tonight, for sure."

The second-seeded Murray was playing in his 11th major final, but the first against someone other than Novak Djokovic or Roger Federer.

He didn't need to face either of those rivals this fortnight: The sixth-seeded Raonic eliminated Federer in five sets in the semifinals Friday, and also defeated the player who stunned Djokovic in the third round, Sam Querrey.

He did it, primarily, with speedy and intimidating serves, averaging 25½ aces. But on a breezy afternoon, at a Centre Court filled with nearly 15,000 partisan fans, Murray shut down that integral part of Raonic's game.

"This one's going to sting," said Raonic, who recently brought John McEnroe aboard as a coaching consultant.

It's been a rough few weeks for Britain, what with its vote to leave the European Union, the resulting drop of the pound's value, and the subsequent resignation of Prime Minister David Cameron, who was seated in the front row of the Royal Box on Sunday, several seats over from Prince William and his wife, Kate.

Murray was even asked by a reporter during Wimbledon how it felt being Britain's "last hope," a question he dismissed by wryly replying, "It's not that bad, is it?"

During the on-court trophy presentation Sunday, Murray clutched his golden reward and joked: "Playing in a Wimbledon final's tough, but I certainly wouldn't like to be a prime minister. It's an impossible job."

Murray, a 29-year-old from Scotland, long dealt with the expectations that accompanied being the locals' best chance to find a champion to succeed Fred Perry, who won the tournament in 1936. But Murray has thrived, with a counter-punching, defensive game and sublime returns of serve.

In a testament to Murray's ability as a returner — a combination of timing and dexterity — it took Raonic 36 minutes and five service games to record his first ace. Over and over, Murray managed to get the ball back, even one that came in at 147 mph.

Raonic was limited to eight aces, only one more than Murray.

And while Murray only broke Raonic once, to lead 4-3 in the opening set, that was all it took, because the tiebreakers were surprisingly one-way traffic. Raonic came in having won a tour-leading 20 tiebreakers this season, dropping only six.

Murray also took 50 of 65 points he served across the first two sets, not only never facing so much as a break point in that span but only once being taken to deuce.

Finally, at 2-all in the third, Raonic got to 15-40 for his first — and, it turned out, only — break points, thanks to a forehand return winner off an 82 mph second serve. But Murray stood tall, taking the next four points to hold, then wheeled toward his box, pumping his right fist and yelling.

According to the official statistics, Murray made only 12 unforced errors, including two in the second set. While that's a subjective accounting, anyone watching and listening could plainly tell that he was striking the ball cleanly and confidently, a crisp thwack resonating as racket strings hit ball, much more often than not putting shots right where intended.

Those three recent setbacks came without Ivan Lendl by his side, though. They worked together when Murray won his first two Slam trophies, including at the 2012 U.S. Open, then split up, before reuniting last month.

Once again, the partnership paid off, and at Wimbledon, no less.

"This is obviously the most important tournament for me, every year," Murray said. "I'm proud to have my hands on the trophy again."