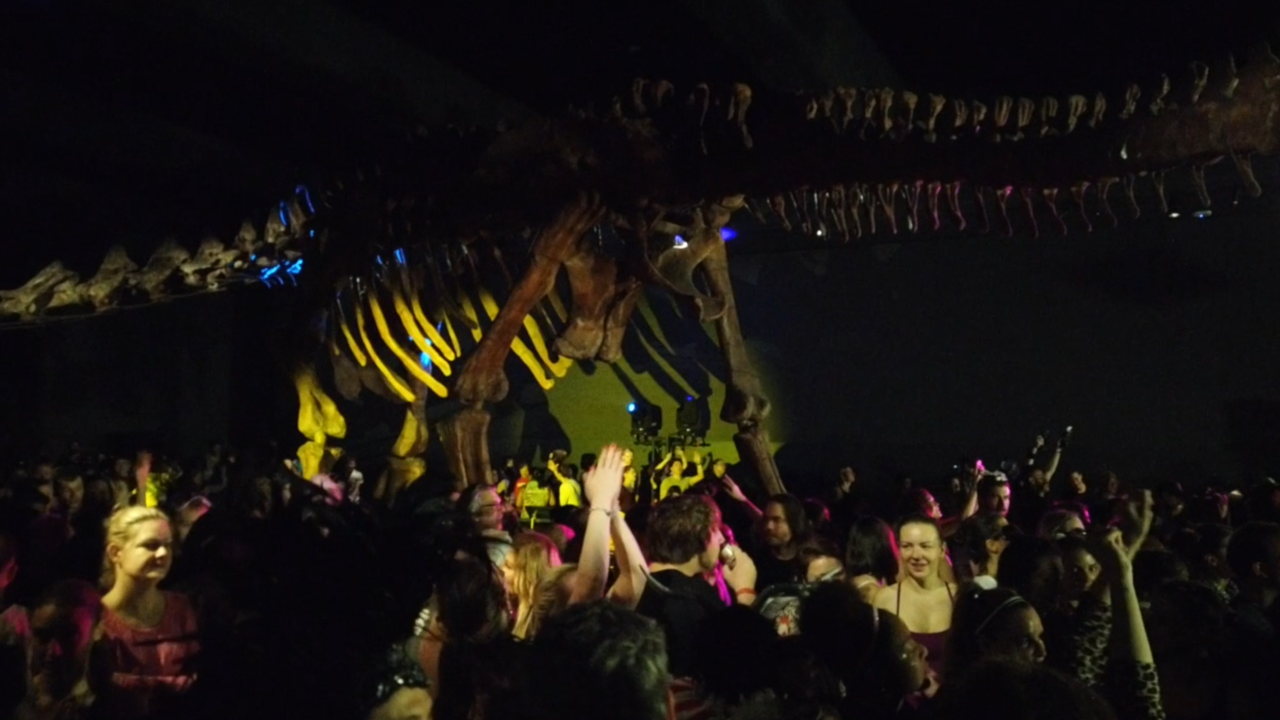 They burst past the barricades and they’re ready to party, wearing leopard prints and fake furs. The outfits are appropriate as the first stop in this new-age party is what you might call an experiential yoga class, and it’s in the African room at the American Museum of Natural History in New York.

It's all part a very unique party. One that, on this particular Saturday, devolved into dancing under a 100 million-year-old dinosaur skeleton.

The party is called Daybreaker, and it starts at 6 a.m. One unique feature about the party: you won’t find a drop of alcohol.

“People are looking for a more wellness-oriented life, but don’t really know how to do it right now,” said Radha Agrawal, the party’s co-founder. “So, we are giving them an option to do that.”

At Daybreaker events , the whole family, including children, will find healthy snacks and protein drinks laid out on tables in other nearby museum rooms.

And yes, it gets just as loud as a typical nightclub.

But the patrons are sober, or at the very least, sober-curious. Organizers have taken advantage of a recent trend, where it seems more and more people are looking for events where they don’t have to feel pressured to drink and they know others won’t be drinking either.

“I don’t really drink that much honestly, and all my friends do,” said party attendee and attorney Kacey Martin. “So, for me to hang out with my friends, it’s like ‘Oh, let’s go to a bar,’ and I don’t necessarily want to do that. But I want to go dance and have a good time.”

This particular party was on a Saturday and coincided with the museum’s EarthFest events leading up to Earth Day.

But many Daybreaker parties take place before work on weekdays. Organizers say it’s in the morning, so attendees can start their day off by shedding the kind of endorphins released by dancing.

“We want to change this whole dynamic of nightlife and bring it to the morning when we are the most energized and most optimistic and everyone’s on the same page,” Agrawal said.

“You breathe in the energy, and you’re ready to go for the rest of the day,” Holovach added.

Daybreaker is never in the same venue more than once, and you have to keep tabs on their website to find the next party. But be quick, because they tend to sell out almost immediately.