A caravan of migrants is nearing Mexico's border. Will authorities turn them back? 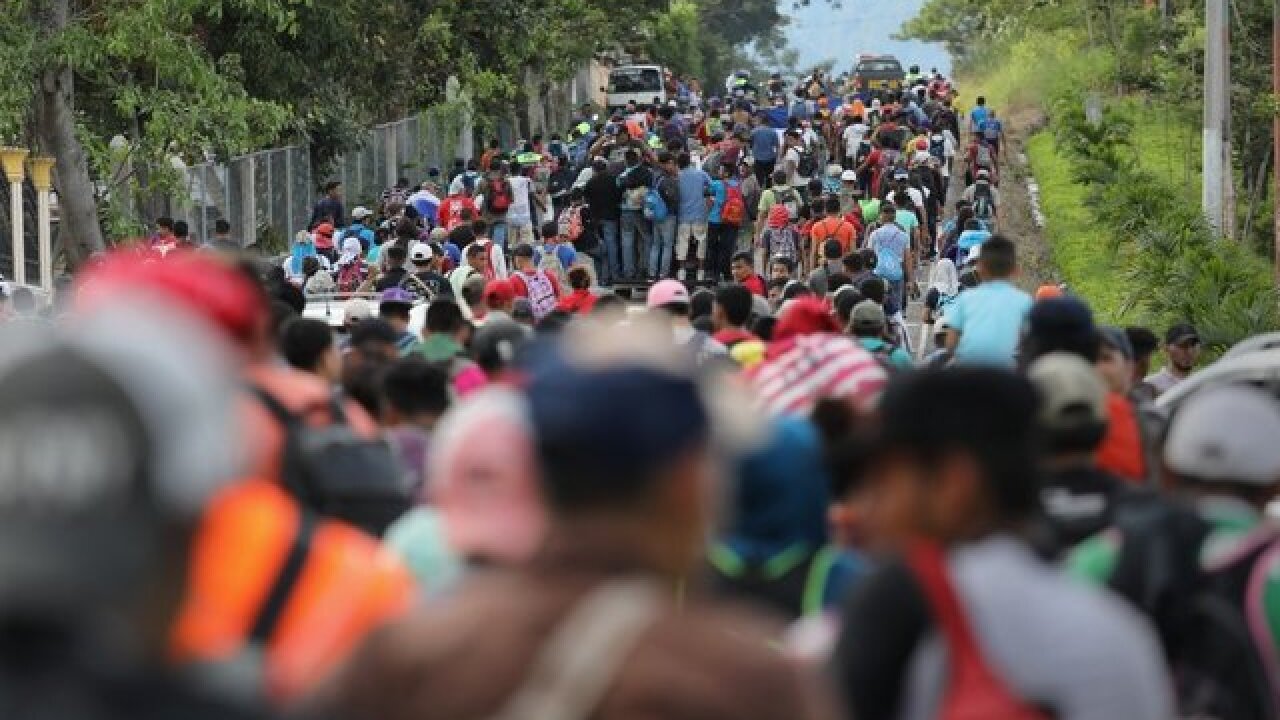 Thousands of migrants are about to be at Mexico's doorstep. And US Secretary of State Mike Pompeo is about to meet with officials in Mexico's capital.

The Honduran migrants,  trekking in a caravan toward Mexico's southern border , say they're headed for the United States -- fleeing violence and searching for economic opportunity.

Pompeo is headed to meetings in Mexico City with a message for leaders there about the massive caravan of migrants: Stop them before they reach the US border.

The key questions: Will Mexico let the migrants in? And what will happen if they do?

The caravan quickly grabbed the attention of world leaders as word of its formation spread over the weekend. By Tuesday, US President Donald Trump had weighed in with a warning,  threatening to cut foreign aid  to Honduras if the group didn't turn back.

They plan to cross Mexico's border in the coming days, then continue north to the United States.

Already some migrants from the caravan have begun to arrive, seeking refuge,  Mexico's foreign ministry said in a statement Thursday night . And  local media report  that growing numbers of migrants have reached the Guatemalan city of Tecun Uman, across the winding Suchiate River from Mexico.

A bridge over the river marks an official crossing point.

Migrants have been known to cross the river on rafts for years -- sometimes encountering authorities along the way, sometimes meeting little resistance as they slipped into Mexico and continued their journey north.

In recent days Mexican authorities have made a point of showing they were stepping up security near the country's southern border. Mexican Federal Police released a video of officers arriving in the border state of Chiapas, some toting riot gear.

Mexico's government  also released a statement  outlining how it planned to respond:

• Anyone with a valid visa will be able to enter and move freely.

• Anyone who wants to be recognized as a refugee or as a beneficiary of "complementary protection measures" must do so individually. Those who do so will be held "at a migratory station" for up to 45 business days.

• Anyone who enters "in an irregular manner" will be "rescued and subject to an administrative procedure and, where appropriate, will be returned to their country of origin in a safe and orderly manner."

Mexican authorities have also said  they're asking for help from the United Nations High Commissioner for Refugees  to process migrants seeking refugee status at the country's southern border.

This appears to be a shift from previous policies, in which humanitarian or transit visas were issued, and migrants were given the option of continuing their journey north if they didn't want to seek asylum in Mexico.

This past spring, when another caravan of Central American migrants crossed into Mexico, such policies allowed the group to make it to the US border.

But there are still many unanswered questions about how this will actually play out once large numbers of migrants arrive. A complicated mix of pressures are weighing on Mexican officials as they decide how to handle the matter.

"It's a very difficult situation for the Mexican government," says Ana Maria Salazar, a former Pentagon official who's now a security analyst in Mexico City.

"It's a situation that is almost impossible to resolve at this time for Mexico," Salazar told CNN en Español Thursday.

Among the factors at play:

Trump zeroed in on Mexico's role Thursday, tweeting that he cared more about the caravan than the recently renegotiated North American trade deal between Mexico and Canada. And he threatened to send troops to "shut down" the southern US border if Mexico failed to stop what he called an "onslaught."

If Trump pulls out of the trade deal or closes the border, there would be major economic implications for both countries. If Mexico ultimately cracks down on the caravan, it would be seen as a coup for the administration in the United States -- especially among Trump's supporters -- and would speak to how successful efforts to build bridges with the Mexican government have been, even as Trump continues to boast about building a border wall.

But in Mexico, where protesters already have been marching in support of the approaching Honduran migrants, caving to US pressure wouldn't play nearly as well.

2) Migration on both sides of the border

It's important to remember that for Mexico, migration isn't just about people coming into the country, Salazar says.

It's also about Mexican emigrants living abroad, many of whom are undocumented.

"One way or another, the way Mexico treats the undocumented immigrants from Central America affects Mexico's position in how it can criticize the US government for its treatment of undocumented Mexican immigrants in the United States," Salazar told CNN en Español.

Mexican President Enrique Peña Nieto has partnered with the United States in the past on immigration-related issues. In recent years,  Mexico has deported more Central American immigrants than the United States .

But Peña Nieto is a lame duck, with less than two months left in office. So that makes any international policy negotiations tricky.

"We're looking for concrete results," the State Department said before Pompeo's trip, "and for solutions that work for both countries."