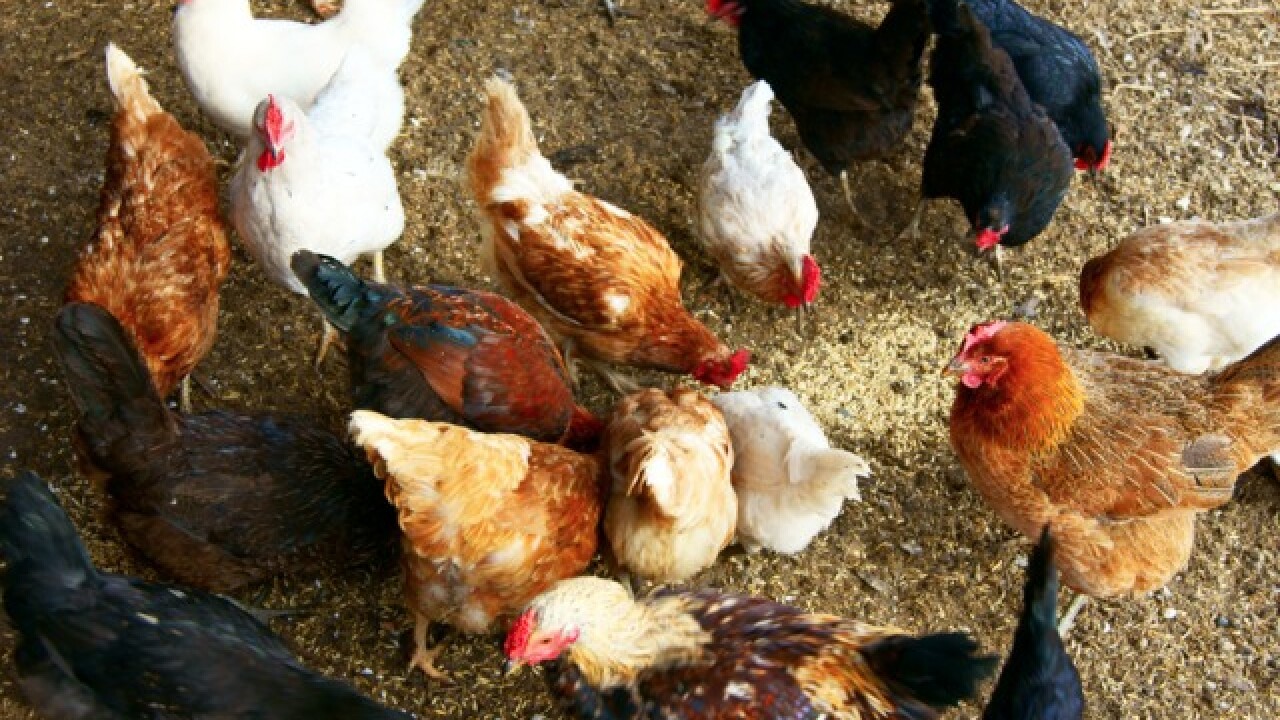 About 1.7 million chickens have been killed in flooding from Florence as rising North Carolina rivers swamped at least 60 farm buildings where the animals were being raised for market, according to a major poultry producer.

Sanderson Farms said Tuesday the losses occurred at independent farms that supply its poultry processing plants. The company said its facilities suffered no major damage, but supply disruptions and flooded roadways had caused shutdowns at some plants.

In addition, about 30 farms near Lumberton have been isolated by flood waters, hampering the delivery of feed to animals. The lack of food could cause additional birds to die if access isn't restored quickly, the company said.

The N.C. Pork Council says some hogs also may have died when farms flooded, but that mortality figures are not yet available. The pork industry trade group says farmers have been working before and after the storm to move at-risk animals to higher ground. The industry lost about 2,800 hogs during flooding from Hurricane Matthew in 2016.

The Department of Environmental Quality said the earthen dam at one hog lagoon in Duplin County had breached, spilling its contents. Another 25 of the pits containing animal feces and urine have either suffered structural damage, had wastewater levels go over their tops from heavy rains or had been swamped by floodwaters. Large mounds of manure are also typically stored at poultry farms.

Even though the sun shown in parts of the state Tuesday, major flooding is continuing after Florence's passage and is expected to worsen in some areas. Sixteen North Carolina rivers were at major flood stage Tuesday with an additional three forecast to peak by Thursday.

An environmental threat is also posed by human waste as low-lying municipal sewage plants flood. On Sunday, the Cape Fear Public Utility Authority reported that more than 5 million gallons of partially treated sewage had spilled into the Cape Fear River after power failed at its treatment plant.

The Environmental Protection Agency said Monday that 16 community water treatment facilities in North Carolina are unable to supply drinking water and that seven publicly owned sewage treatment works are non-operational due to the flooding.

Duke spokeswoman Paige Sheehan said a full assessment of how much ash escaped from the waterlogged landfill is ongoing. The company initially estimated Saturday that about 2,000 cubic yards (1,530 cubic meters) of ash were displaced, enough to fill about 180 dump trucks.

The coal-fired Sutton plant was retired in 2013 and replaced with a new facility that burns natural gas. The company has been excavating millions of tons of leftover ash from old pits there and removing the waste to a new lined landfill constructed on the property. The gray ash left behind when coal is burned contains toxic heavy metals, including arsenic, lead and mercury.

Photos from the site provided to AP by Cape Fear River Watch, an environmental advocacy group, show cascades of gray-colored water spilling from at least two breaches at the landfill and flowing toward Sutton Lake, the plant's former cooling pond which is now used for public recreation, including fishing and boating.

Sutton Lake drains into the Cape Fear River. Sheehan said Duke's assessment is that there was minimal chance any contaminants from the spill had reached the river.

At a different power plant near Goldsboro, three old coal ash dumps capped with soil were inundated by the Neuse River. Duke said they had no indication those dumps at the H.F. Lee Power Plant were leaking ash into the river.

Duke's handling of ash waste has faced intense scrutiny since a drainage pipe collapsed under a waste pit at an old plant in Eden in 2014, triggering a massive spill that coated 70 miles (110 kilometers) of the Dan River in gray sludge. The utility later agreed to plead guilty to nine Clean Water Act violations and pay $102 million in fines and restitution for illegally discharging pollution from ash dumps at five North Carolina power plants. It plans to close all its ash dumps by 2029.

In South Carolina, workers with electricity provider Santee Cooper erected a temporary dike in hopes of preventing flooding of an old coal ash dump at the demolished Grainger Generating Station near Conway. The dump is adjacent to the Waccamaw River, which is expected to crest at nearly 20 feet (6 meters) this weekend. That's nine feet above flood stage and would set a new record height.