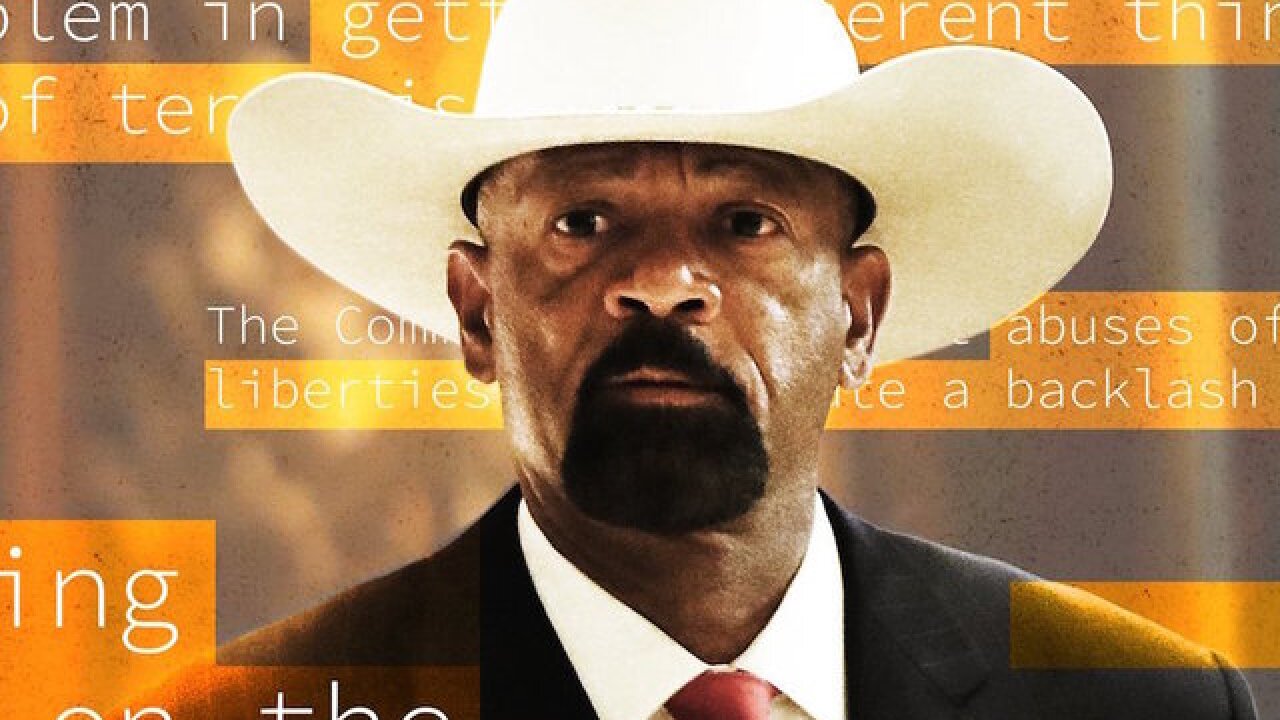 © 2018 Cable News Network, Inc.
CNN Illustration/Getty Images
<p>Former Milwaukee Sheriff David A. Clarke, Jr., a vocal surrogate for President Donald Trump on the campaign trail, was temporarily blocked from tweeting after Twitter users' complaints alerted the company that three of his messages violated the terms of service, CNN has learned.</p>

Former Milwaukee Sheriff David A. Clarke, Jr., a vocal surrogate for President Donald Trump on the campaign trail, was temporarily blocked from tweeting after Twitter users' complaints alerted the company that three of his messages violated the terms of service.

Clarke was placed in read-only mode until he deleted three tweets that seemed to call for violence against members of the media.

In one of them, which has since been deleted, Clarke told his followers, "When LYING LIB MEDIA makes up MAKE NEWS to smear me, the ANTIDOTE is to go right at them. Punch them in the nose & MAKE THEM TASTE THEIR OWN BLOOD. Nothing gets a bully like LYING LIB MEDIA"S attention better than to give them a taste of their own blood #neverbackdown."

One Twitter user who complained about Clarke shared with CNN the email response from Twitter in which the company stated, "We have reviewed the account you reported and have locked it because we found it to be in violation of the Twitter Rules: https://support.twitter.com/articles/18311. If the account owner complies with our requested actions and stated policies, the account will be unlocked."

The Twitter rules note that users "may not make specific threats of violence or wish for the serious physical harm, death, or disease of an individual or group of people."

A spokesperson for Twitter confirmed that the email the user received from the company was accurate, but would not comment further on Clarke being temporarily blocked from tweeting.

Clarke did not immediately respond to CNN's request for comment.

He tweeted about the Twitter reports, writing, "I know I'm winning. Some snowflake lib made a complaint to Twitter because of my earlier tweet about black kids being exploited by lefty failed policies at Ballou High School. I said in my tweet, this CRAP is criminal. Twitter said no violation of rules. Diaper change time."

Clarke, a loyal supporter of Trump who is reviled by civil rights advocates, resigned from his post last year and joined the super PAC America First Action, which helps elect candidates who support the Trump administration.

He announced in May he was going to join the administration as an assistant secretary in Department of Homeland Security, serving as a liaison with law enforcement at several levels across the country. In June, however, a DHS spokesman told CNN he was no longer under consideration.

Clarke has been the subject of scrutiny for his controversial comments, including calling members of the Black Lives Matter movement "purveyors of hate."

He has also faced backlash for his management of a Milwaukee County Jail, in which an inmate died of dehydration after going a week without water, according to prosecutors.