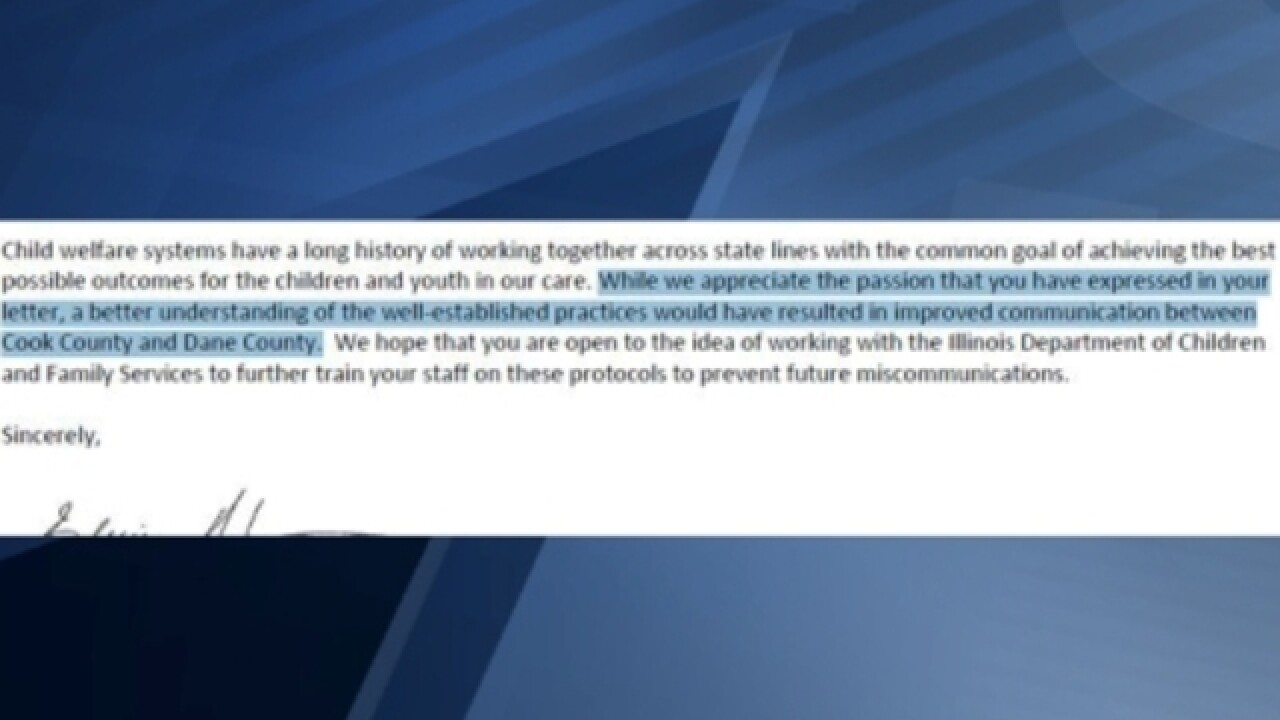 MADISON, Wis. (AP) -- A Wisconsin official is defending the state's handling of a runaway foster child found in Chicago following criticism from an Illinois sheriff.
Department of Children and Families Secretary Eloise Anderson told Cook County Sheriff Thomas Dart in a letter Tuesday that it was his officers, not Wisconsin officials, who didn't follow protocol.
Dart had sent a letter blaming Wisconsin officials after the 17-year-old girl's mother and two Dane County service agencies refused to pick her up when officers in Illinois contacted them.
Anderson says the officers should've first contacted their local child welfare agency.
According to Dart's letter, officers found the girl last week in a car on Chicago's west side with 420 grams of heroin and four grams of marijuana. He didn't immediately respond to a message.
------

MADISON, Wis. (AP) -- An Illinois sheriff blasted Wisconsin officials Monday for not picking up a runaway Dane County foster child arrested in Chicago.
The Milwaukee Journal Sentinel reports that Sheriff Thomas Dart of Illinois' Cook County wrote a letter to Wisconsin Gov. Scott Walker telling him Illinois welfare agencies had to step in after Wisconsin agencies didn't.
According to the letter: Officers found the 17-year-old girl last week in a car on Chicago's west side with 420 grams of heroin and four grams of marijuana. After determining the teen had run away from a Dane County foster home, they contacted the girl's foster mother, who refused to pick her up but referred them to the Juvenile Reception Center in Madison. Officials there also refused to pick her up but referred them to the Dane County Department of Human Services. No one there would pick her up either.
Dart also noted in the letter that it didn't appear anybody had reported the girl missing until officers began making calls.
"When a child goes on the run, reports must be filed," he said. "When a foster mother receives a call, she should act and agencies whose mission it is to help and care for vulnerable children must be held accountable for doing so."
Walker spokesman Tom Evenson says the governor's staff has directed the Department of Children and Families to look into the matter.
Joe Scialfa, DCF's spokesman, said the agency is following up with Dane County "regarding information that was received."