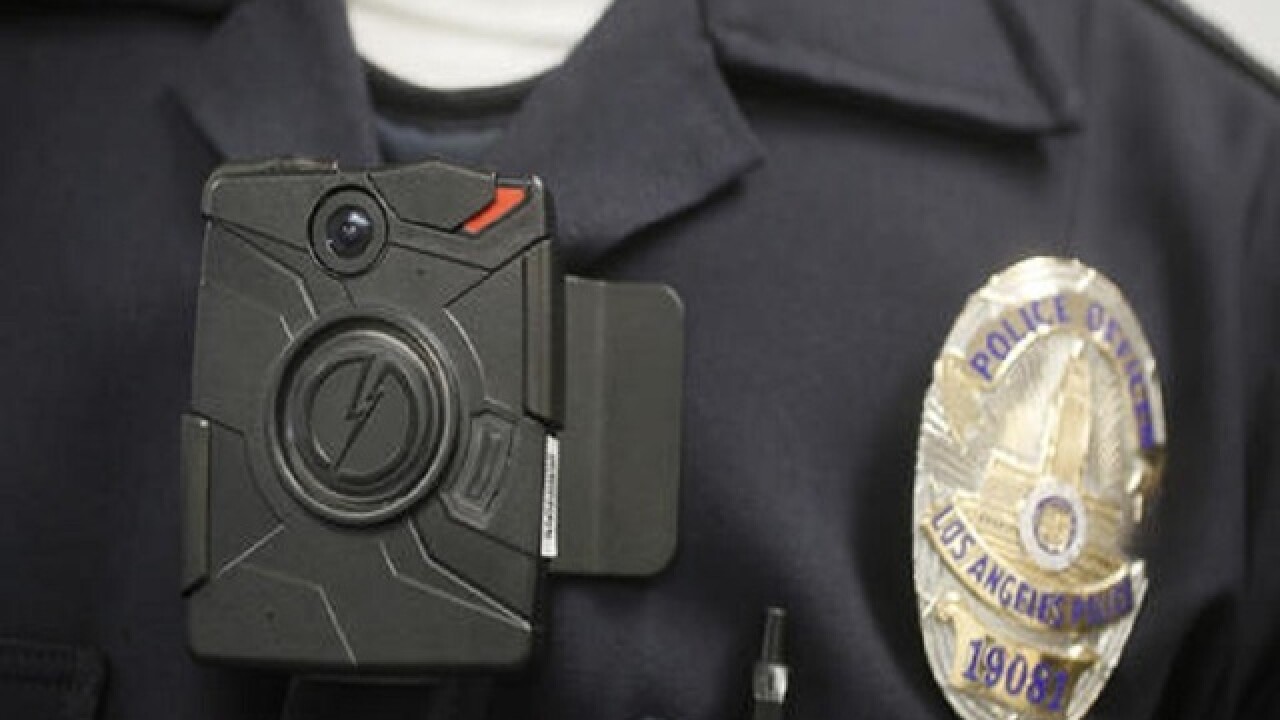 Damian Dovarganes
<p>FILE - In this Jan. 15, 2014 file photo a Los Angeles Police officer wears an on-body camera during a demonstration in Los Angeles. An agreement with Boston's largest police union to have 100 officers wear body cameras was praised as a step toward greater accountability. But with the Sept. 1, 2016, rollout date for the pilot program approaching, not a single officer had volunteered to wear one. (AP Photo/Damian Dovarganes, File)</p>

MADISON, Wis. — Wisconsin open records advocates are getting behind a new bill that would give the public access to most police body camera video, after a measure that would have sealed such footage died last session.

Officer-involved shootings around the country have spurred a national push to force police to wear body cameras to help determine the circumstances. Such video can end speculation about an officer's actions, potentially sparking or quelling public outrage.

The new proposal wouldn't require police to use body cameras, but it would declare that any footage that is captured would generally be available for the public to inspect and copy under Wisconsin's open records law. The Senate judiciary committee has scheduled a hearing on the bill for Tuesday.

"(The new bill) is dramatically better," said Bill Lueders, president of the Wisconsin Freedom of Information Council. "The earlier version created all kinds of hoops that authorities had to jump through before releasing records."

The bill does include some exceptions. Footage of subjects who are minors or victims of sensitive or violent crimes would be sealed unless a department feels the public interest in releasing the footage outweighs such exemptions. So would footage of people taken in places where they would have a reasonable expectation of privacy, such as their homes. If a department decides to release such footage of minors, victims or people in private places, it could choose to blur or conceal the subject's face or anything else that might identify him or her.

Departments would have to retain all footage for at least 120 days. Footage of deaths, injuries, arrests, searches and the use of force would have to be retained until the investigation or case is resolved.

The bill is a stark departure from the Legislature's last attempt at regulating body camera footage.

Republican lawmakers introduced a bill during the 2017-18 session that would have exempted all footage from the open records law except video of injuries, deaths, arrests and searches. If the video was captured in a place where someone would have a reasonable expectation of privacy, police would have had to obtain permission from any victims, witnesses and property owners before releasing it.

The Assembly passed the bill but it died in the Senate amid opposition from the American Civil Liberties Union and the Wisconsin Newspaper Association.

A state Department of Administration fiscal estimate attached to the new bill states that it's unknown how many Wisconsin police departments currently use body cameras.

The estimate warns that footage retention costs could run about $100 per month per camera and that larger cities such as Milwaukee can generate nearly 10,000 hours' worth of video per week.

Departments may need to buy new computer servers to store all the data and the state Division of Enterprise Technology may end up charging departments to use its storage space, the estimate said. But it goes on to say that retaining video could be used as training tools, possibly saving departments money in the long run. The estimate didn't offer any figures.

Jim Palmer, executive director of the Wisconsin Professional Police Association, which represents rank-and-file officers across the state, said the certainty that body cameras provide outweighs the technology's limitations and costs. He said the bill provides clearer uniform guidelines that may encourage more Wisconsin departments to use cameras.

"The heightened degree of accountability that (cameras) can present protects the public and officers alike," Palmer said.

Despite the unified support for the bill, its fate is uncertain.

Scott Kelly, an aide to Senate Judiciary Committee Chairman Van Wanggaard, said Van Wanggaard supports the bill and expects the committee will vote on it in October. But Republicans who control the Legislature have said nothing about the measure. Kit Beyer, a spokeswoman for Assembly Speaker Robin Vos, didn't immediately respond to an email Friday. Alec Zimmerman, a spokesman for Senate Majority Leader Scott Fitzgerald, had no immediate comment.