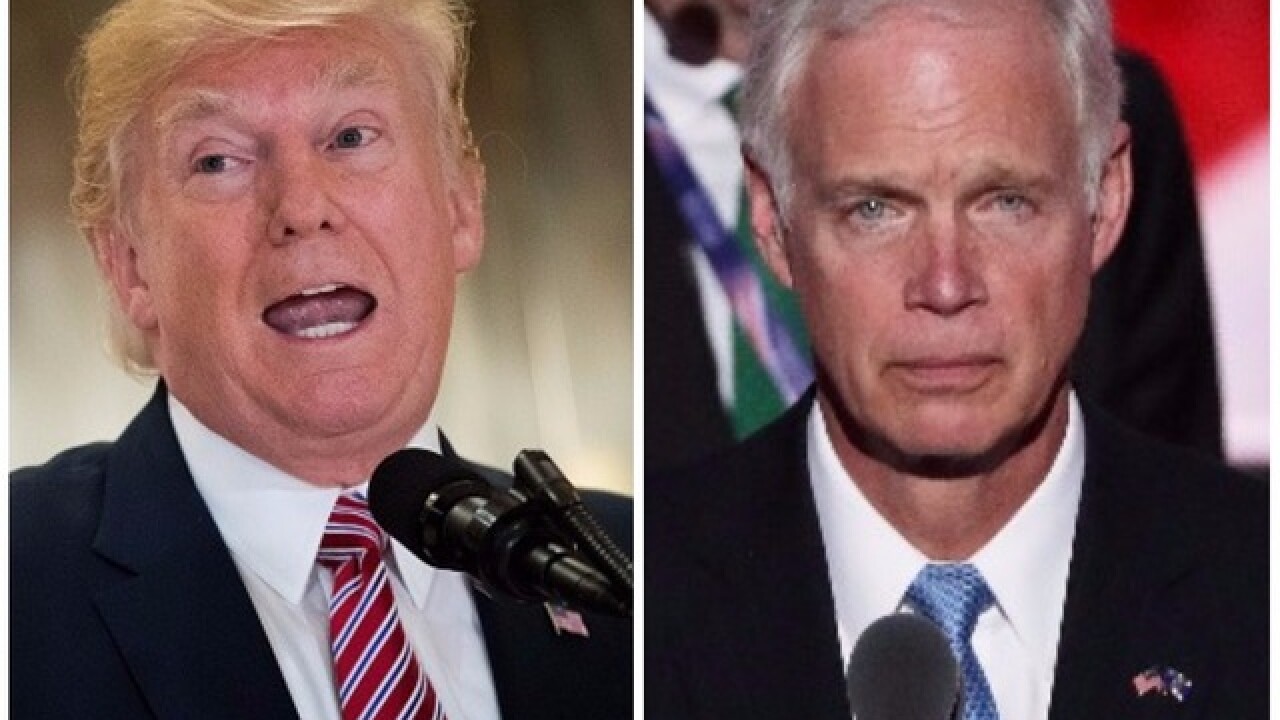 By: Scott Bauer
Posted at 1:22 PM, Aug 16, 2017
MADISON, Wis. (AP) -- Republican U.S. Sen. Ron Johnson said Wednesday that he doesn't think President Donald Trump is a racist or should be impeached, but that he's uncomfortable with Trump's repeated comments saying white supremacists and protesters should share the blame for deadly violence at a Virginia rally.
Gov. Scott Walker called for all white supremacists to be denounced, without commenting specifically on Trump, while other Republicans took a much sharper stand.
U.S. Rep. Mike Gallagher, a former Marine in his first term representing northeast Wisconsin, had harsh words for Trump.
"The president needs to be crystal clear that hatred has no place in our society, but he is currently failing," said Gallagher, a Republican.
Assembly GOP Majority Leader Jim Steineke denounced Trump for twice saying "both sides" shared the blame for violence at the rally where a 32-year-old woman was killed by a white supremacist. Trump has faced bipartisan criticism for not immediately condemning violence by white supremacists at the rally.
"When you see evil, you have to condemn it and do it in no uncertain terms," Steineke said. "I don't believe (white supremacists) have any place in any political party and we shouldn't legitimize their views by making a moral equivalent argument."
Johnson told reporters Wednesday that Trump's comments are a distraction from his broader agenda, including tax reform, and that he wishes the president would focus more on unifying the country.
But Johnson also said he did not think the remarks indicate Trump is unfit for office. Democratic U.S. Rep. Gwen Moore, Wisconsin's only African-American representative in Congress, called for Trump to be impeached hours after his comments on Tuesday.
Johnson said "I see no grounds" for impeachment.
"The American people elected Donald Trump and I'm not sure he's changed much from what he was during the campaign," said Johnson, who was an early and vocal supporter.
Asked if he thought Trump was a racist, Johnson said: "I don't think so."
When pressed why, he grew testy: "Because I just don't think so ... I think we've covered this one well enough."
Walker said after a round table event in Green Bay that he denounces all hate, echoing his tweet on Saturday condemning violence at the rally.
"I think any of the white supremacist groups or other groups just need to be unilaterally dismissed and denounced," Walker said.
Johnson said it was "depressing" that Heather Heyer was killed when a car rammed into a crowd of people protesting white nationalism, saying "all political officials need to speak out against that."
House Speaker Paul Ryan tweeted Tuesday that "white supremacy is repulsive," but did not specifically address the president's comments.
Republican state Rep. Adam Jarchow, of Clear Lake, set off a heated exchange on Twitter when he said: "As a reminder, (at)GOP is the party that ended slavery and led the civil rights fight. Dems on wrong side of both."
When questioned to explain if he was saying Trump was on the right side of the issue now, Jarchow tweeted: "Every single member of the (at)GOP I know deplores racism and denounces it. It's disgusting and wrong. That's the GOP I know."
Even conservative Wisconsin talk radio host Jerry Bader denounced Trump in response to Jarchow, saying the president's words are "vile, repugnant and clearly illustrate he is not fit to hold the office of president."
Copyright 2017 The Associated Press. All rights reserved. This material may not be published, broadcast, rewritten or redistributed.