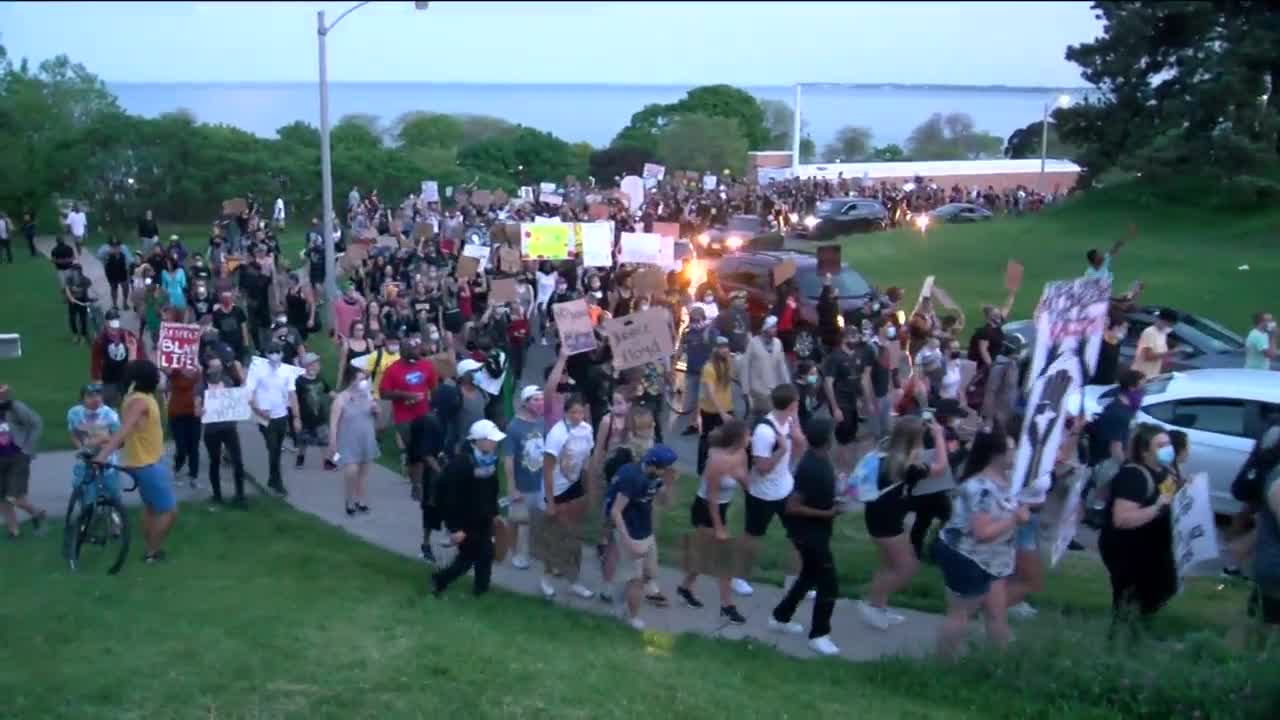 Unrest isn't unfamiliar to some in Milwaukee who lived through it in the 60's. Now they draw comparisons between demonstrations.

It is very symbolic of the neighborhood it’s standing up in; Bronzeville is an area west of the Milwaukee River, between North Avenue and State Street, and is recognized as a neighborhood that celebrates diversity and inclusion. The two artists painting the eleven letters that spell out the neighborhood’s name are doing each one very differently.

“We definitely thought about being unique,” Mya Bennett said.
It’s hard to miss the symbolism the city’s newest art installation represents. While each of the letters painted by Mya and Anna Rose Menako are diverse and individual as one, they are beautiful together. Much like the protesters who have taken to the streets of Milwaukee.

“I’m really humbled to do work in Bronzeville in the public,” Menako said. “There’s so much great going on.”

Even on an overcast day, much chillier than it’s been for months, the act of painting these larger than life letters are cathartic for Mya.

“It’s in the process,” Bennett said. “I'm a person of repetition. I like the back and forth, the view of all the repetition and patterns. The more you do it, the better.”

Repetition is what links today's protests with yesterday's Civil Rights marches. Although those protests took place over 60 years ago, long before Mya and Anna Rose were even a thought, the two groups represent impassioned youth fighting for their rights.

"I think the causes are still similar,” Della Wells, a local artist said. “They’re still fighting for justice, particularly in the legal system.”

Wells has the experience to back it up. She was a teenager during the late 60s when marches were frequent in Milwaukee’s streets. Those protests were over fair housing. However, she recalls taking to the streets in 1968; she refers to it as Third Street because, on that day she marched, it hadn’t been named after the man who she was marching for.

"When Dr. King got killed, there was a protest,” Wells said. “I joined that protest. I had to sneak out and join that protest. I was what, 15 or 16 when he died. My parents wouldn’t have let me out to protest.”

Her motivation to get out and make her voice known despite her parents’ wishes reminds her of the young people she sees in the streets now, fighting against injustice.

“I think this is going to be an important moment in a lot of young people and children’s lives,” Wells said. “I can imagine what they’re telling their children, their grandchildren, or their great-grandchildren.”

The protests in George Floyd’s name are looking to last longer than any protest in Milwaukee before. Organizers have said they’d wish to march for 201 straight days; one longer than the previous longest protest. Starting in 1967, protesters in Milwaukee marched for 200 days to fight for fair housing.

As important as the marches have been, both in 1967 and today, Wells hopes those participating remember to continue the message longer than their steps in the streets.

"I hope they take it not just protest but get out to vote,” Wells said. “Run for office. If you start businesses, make the change there. Make change in your families.”

Despite the black and white film showing iconic images from those marches in the 60’s, Wells said she didn’t realize she had lived through such a historic time until she was in her late 20’s. It was then, she realized she was part of a movement to make a difference. The advice she shares with the youth of today; realize history is now.

“Somebody in the protests may be our next president in years to come,” Wells said. “But change is going to have to be in our political structure, how we look at things. I think they can do it but we must not get comfortable. I don’t want future children to say the same thing about this movement.”

Other local Milwaukee historians will join Wells for a conversation called, “Milwaukee After the Unrest” where they compare the movement of the 60’s with today. It starts at 5:30 and can be viewed on the Bronzeville Week Facebook Page.