Review: Twenty One Pilots give high-energy show at the BMO Harris Pavilion 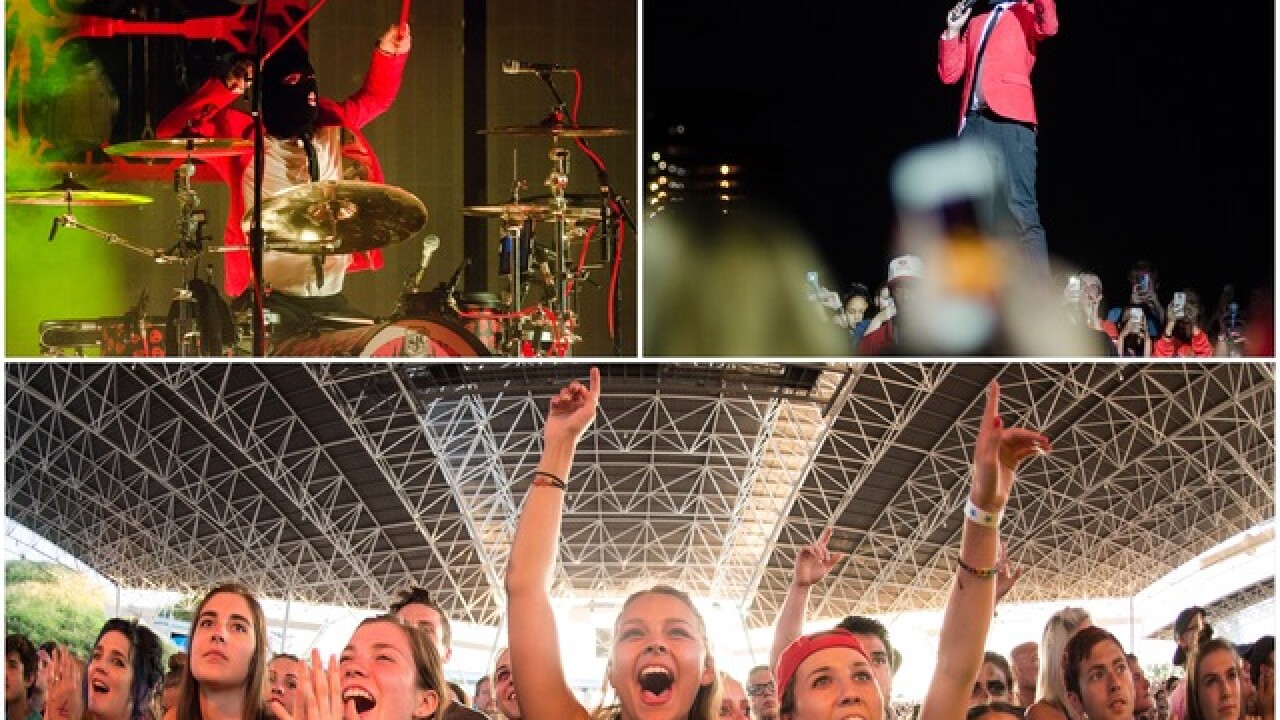 MILWAUKEE -- If you were at German Fest Saturday night, you may have heard the commotion from Twenty One Pilots (TOP) performing at the BMO Harris Pavilion overflow to the other stages at Henry Maier Festival Park.

Let me start off by saying, there are not proper categories or labels for these two guys. Tyler Joseph isn’t simply a singer nor is Josh Dunn solely a drummer. Both are multi-talented, musically infused humans. At one point, Joseph was seen with a ukulele, piano, tambourine and some kind of synthesizer to top it off, and in between Dunn’s drum sessions he would whip out a trumpet, which at one point led into their rendition of “Jump Around.”

TOP gave a high-energy, well-plotted show. This cannot simply be called a concert. It was a theatrical performance with meaning behind every song and every song its own individual story painted out with a scene of lights and images flashing on a large screen behind them.

The duo started the show with anonymity as they covered their faces with ski-masks and wore their signature red jackets. After, transitioning from one outfit to another, they laid it all out on the stage, never seizing their fashion, flips, jumps and flawless performance, song after song.

While there were definitely more pre-recorded sounds coming out of the P.A speakers than just portrayed, as these two are typically the only two on stage, that didn't seem to ruffle any of the fans feathers.

Speaking of fans, I feel obligated to bring up an observation that was impossible to go unnoticed. It has been while since I have seen a fan base quite like this one. These fans were dedicated, knowing every rap, every beat, wearing Dunn’s orange-ish/red eye shadow around their eyes, and painting their necks and hands black as Joseph does. What stunned me most was that Joseph and Dunn were able to immerse themselves amongst the crowd numerous times and had no problems, as the most fans did for attention was put their hands out in hopes that one of them would graze against it.

Not only that, but at one point the crowd was holding Joseph as he stood up on hands of the crowd and continued his performance.

Later on, Dunn took a smaller version of his drum set that was glued on to a 4-by-4 mini stage, if you will, and the crowd (and security) holding this stage over heads of fans as he continued his drum session. This is all very remarkable, when an artist is able to do this, with confidence and have their fans not overreact to them being so close. Amazing.

Joseph and Dunn’s set list did just as fans like, and that was bringing it back by playing older music and then throwing in the newer stuff in between. They left the newest radio hit, “Stressed out” towards the end. I’d say, generally, holding out on new songs like that re-energizes fans nearing the end of the night, but these fans never got tired.

Twenty One Pilots is unarguably an eclectic group. As I mentioned earlier, individually unable to categorize, the music and style as a whole is even harder to pin-point. They use various types of rap styles, EDM, reggae, rock, slow standard ballads for good measure, and entertain you with their great panache, unique fashion and relentless energy.