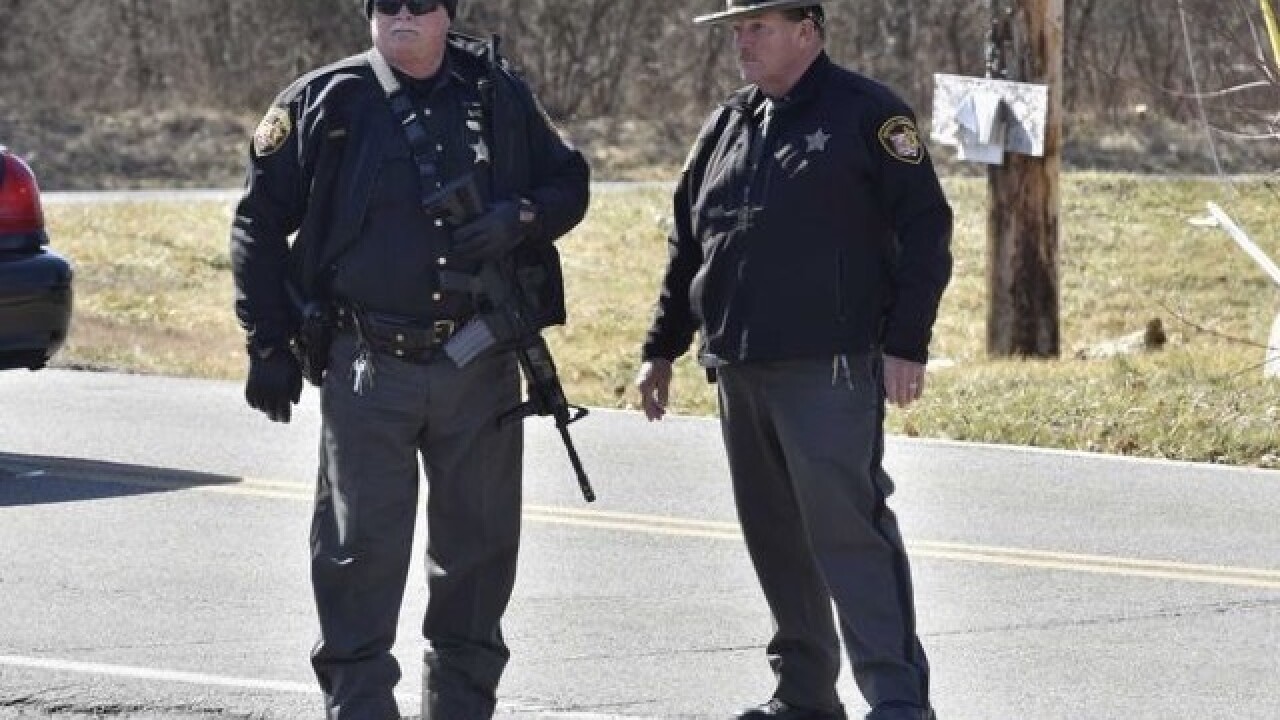 It was lunchtime for many of the students at Madison Sr./Jr. High School, until it became their worst nightmare.

"I was right next to the table that was shot at," eighth-grader Toby Kinin said. "I heard a shot. I saw one of the kids go down and grab her leg and everybody running out of the building."

One of the youngest students at the school said the shooter spoke to her before he opened fire.

An 11th-grade student was near the cafeteria, heard the shots and alerted others to take cover behind locked doors in the library.

"My legs won't stop shaking for another hour," Zayd Ahmed said after recounting his ordeal.

Another student, Rebecca, told WCPO she was in class when someone sounded a warning on the intercom.

"It was panic," Rebecca recalled later. "No one knows what to say when you hear that. Every time we have had a drill, we all know it's a drill. But when you hear it, the first thing is, 'Oh, my goodness!  What is going on?'"

Rebecca and her classmates didn't know – they hadn't heard the shots – so they did what they were instructed to do. They locked the doors, turned off the lights and went to the back of the room and tried to stay calm and silent.

"Immediately there was some messaging from outside the school," Rebecca said. "Nobody in the school knew what was going on, but we were getting some information from the outside. As soon as we found out it was a shooting, obviously, we all stopped and prayed."

When you say "active shooter" or "shots fired" at a school, today's students think of Sandy Hook. Their parents think of Columbine. Those weren't school shootings. Those were massacres.

"At first I didn't believe it," sophomore Joie Robinson said. "Honestly, nobody would think it ever happened, because it's such a small school. And an eighth-grader? He was a really good kid, too."

Thank goodness this was no massacre. Thanks goodness no was killed. Thank goodness the two students who were shot will recover from their non-life threatening wounds, according to Butler County Sheriff Richard Jones.

The 14-year-old shooting suspect is in custody. Jones said authorities think they know why James Austin Hancock fired a .380-caliber handgun at 15-year-old Cameron Smith and 14-year-old Cooper Caffrey, but the sheriff said he wasn't ready to discuss  a possible motive. Hancock and Caffrey are on the wrestling team.

Two other students, Brant Murray and Katherine Doucette, both 14, were injured by flying shrapnel or while trying to get out of the way, Jones said. They will be OK, too.

But nobody knew that at 11:15 Tuesday morning, when the first call went out. There was an active shooter in the high school.

Toby's mom, Stephanie Kinin, rushed to the school and wound up at a staging area set up for parents.

"My heart went to my hands, literally,"  she said.

Students who were in the cafeteria when the shots rang out, like Toby, ran out of the building in panic, she said.

Before taking cover, Kinin said she saw the gunman run out of the building. As he ran up a hill, he tossed his handgun on the ground, the sheriff said. A K-9 unit caught him before he got off campus, and police recovered the gun,  Jones said.

The threat was over, but nobody knew that at the time. Inside the school, there was still fear – of the shooter and the unknown. Police didn't know if there were other shooters, so they kept the school on lockdown until they could search it. Students and staff who heard the shots went into hiding, worried that the shooter would find them.

Ahmed said he heard the shots as he was walking out of the library, next to the cafeteria.

"I hear 'Bang!' so I thought someone dropped a tray because that always happens," he said. "Then maybe a pause for five seconds, then 'Bang! Bang! Bang' – a total of four shots. I'm like, 'What is going on?' I know that's a gun. All the police from the resource officers room, they ran out straight to the cafeteria."

Ahmed said he "ran back in the library" and no one there was aware of the shooting.

Ahmed said the teacher led the students in the library to another room where they could hide.

"She got her keys and we went back through a little hall in the library and went to another room," he said.

They locked the doors and went into the corner, Ahmed said. "We got some crackers out and just kind of sat there and waited," he said.

Ahmed said he was nervous not knowing what was going on. He said an hour passed before they heard messages on the intercom that assured them "things were not so crazy." Eventually, police and staff came through to give everybody the all-clear, but Ahmed said they passed by his group.

"They're walking around, but we're not in the classroom. They really didn't talk to us. We were in that little cubicle so it was very suspenseful," he said.

Likewise, Rebecca said her class wasn't sure what to make of the situation. They were "freaked out," she said.

"We just assumed it's something going on outside. Everybody starts talking. People make assumptions and rumors fly around. Nobody knew what to think for sure, but we were awfully freaked out - even everybody who was [saying], 'Oh, this is probably no big deal.' Everybody was panicking."

After about 45 minutes, Rebecca said her class heard the all-clear on the intercom. They heard two students had been shot but they were going to be OK.

Rebecca said she was reassured when a SWAT team came in her classroom.

"A SWAT team came into the room with our principal and they said, 'Is everybody OK? Is everybody here? Do you have anybody you're not supposed to have?'

"They were checking numbers, making sure students were accounted for. I'm assuming everything was taken care of outside first," she said.

It was. By 1 p.m., students were dismissed, and they greeted their anxious parents with hugs at the staging area.

Classes were canceled Tuesday, Rebecca said, which will give everybody in the community time to reflect.

"I think tomorrow everybody is going to try to figure out how to deal with it," she said.

"Right now, I'm shocked. I'm thinking, 'Eighth graders, little eighth-graders ... what are they doing with a gun?" he said, referring to the shooting suspect. "I'm just thinking the parents need to lock their guns up and be more cautious. And if a kid's being bullied, they need to talk to him more and have more resources – stuff like that."

Rebecca said she was afraid to go right back to school, even though she felt good about how staff and police handled the situation.

"You always hear about things happening and we think back to the Sandy Hook school shooting. Nobody knows what to think and everybody says, "Oh,  it can happen anywhere. It can happen anywhere' and then it happens to you and it's entirely different when the situation actually happens than when you just talk about a hypothetical situation.

"It makes me nervous," she said.

"The staff handled it very well, though, and that was good to see. It was one of the things that caught everyone's eye. We were in shock about how quickly everybody came together and the law enforcement and the SWAT team. That makes me feel a little bit better."

Rebecca said she was sure the small community would come together and help each other through the anxiety and heartache. She said her mother, a teacher, would be especially affected.

"We knew these kids' first names. It's definitely a tragedy, it really is. But we will handle it together," Rebecca said.

RESOURCE: Talking with your kids about a school shooting

"It's been eye-opening, I think, for the community to see that this can happen here," youth pastor Mary Taylor said.