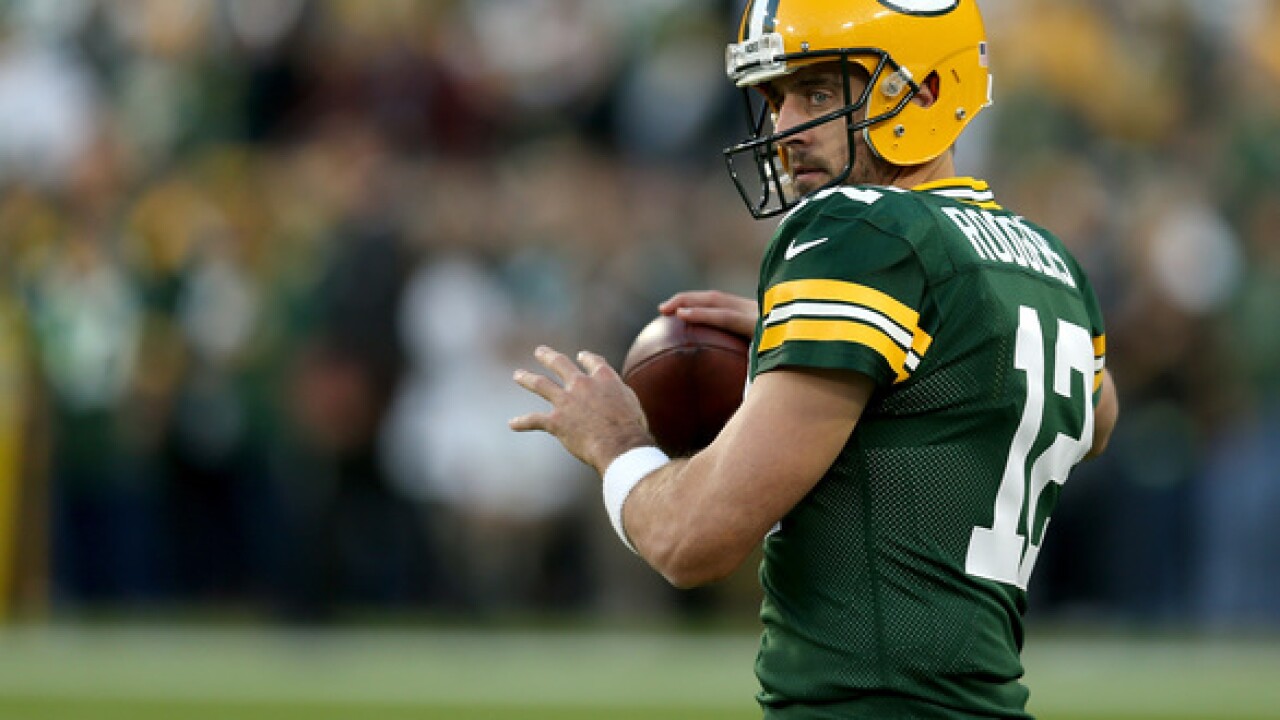 Copyright 2018 Scripps Media, Inc. All rights reserved. This material may not be published, broadcast, rewritten, or redistributed.
Dylan Buell
<p>GREEN BAY, WI - SEPTEMBER 09: Aaron Rodgers #12 of the Green Bay Packers warms up before a game against the Chicago Bears at Lambeau Field on September 9, 2018 in Green Bay, Wisconsin. (Photo by Dylan Buell/Getty Images)</p>

Rodgers, who missed the end of the first half of the Week 1 victory against Chicago with an injured left knee, did not practice Wednesday and Thursday and would not have practiced on Friday.

"Aaron's getting better," coach Mike McCarthy said Friday. "I would say he feels better than he did at the beginning of the week. (Saturday's) practice will be a pretty big indicator. ... nothing has changed. He's clearly day to day. Hopefully, he'll be able to do work (Saturday)."

Even if Rodgers doesn't practice on Saturday, he could play on Sunday.

"You'd like to walk off the field Saturday and have your plan set, but this is the National Football League, things happen," McCarthy said. "We'll be ready for anything, but I know he wants to play."

Rodgers was injured on a sack by Roy Robertson-Harris with about nine minutes to go in the first half against Chicago. He was carted into the locker room for examination, returned for the start of the third quarter and led the Packers back from a 20-0 deficit by throwing for 273 yards and three touchdowns in the second half.

"His competitive nature kind of takes over," offensive coordinator Joe Philbin said Thursday. "He's obviously got exceptional talent. You don't have to be an expert to figure that out. But I think the thing that separates a lot of great players from good players in this league is that competitive spirit. You certainly saw that in full force in the second half. Some of the things he did were pretty special."

After the game Sunday, Rodgers compared his mobility to that of a "statue." One of Rodgers' greatest assets is his ability to move in the pocket and extend plays out of the pocket. Any lack of mobility could play into the favor of a Vikings defense that led the NFL in points allowed last season, and intercepted San Francisco's Jimmy Garoppolo three times in Week 1.

"There's two kinds of mobility," Rodgers said Wednesday. "In the pocket, (the) subtle movements that allow you to have a clean launch point, and then there's movement that allows you to get outside the pocket, which allows you to extend plays and take shots down the field or run. And we'll see what kind of mobility I'm allowed to have."

If Rodgers can't play, DeShone Kizer would get the start. Kizer had the NFL's worst passer rating and lost all 15 starts as a rookie with Cleveland last season. The Packers acquired him in an offseason trade, and he beat out Brett Hundley, who went 3-6 in nine starts last season with Rodgers sidelined by a broken collarbone. In his first two series against Chicago, Kizer lost a fumble and threw an interception that was returned for a touchdown.

"I think obviously we have the best player in the league in our locker room," Kizer said of Rodgers. "If he's ready to go, I'm looking forward to cheering him on and doing whatever I can to help him. It's also my duty and job to make sure I'm ready to go just in case he's not."