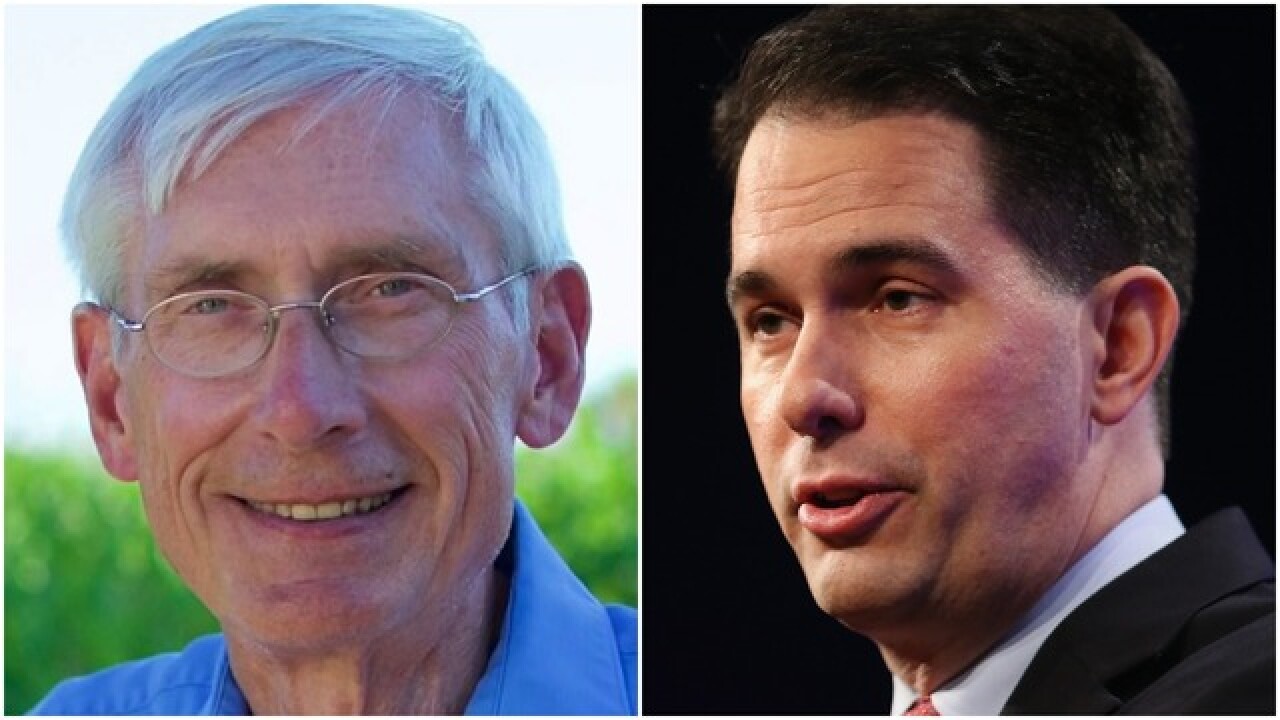 The Marquette University Law School poll landed as Walker and his allies have outspent Democratic challenger Tony Evers by millions of dollars, and as Republican Leah Vukmir, a state senator, is trying to knock off Democratic U.S. Sen. Tammy Baldwin.

The poll showed that 75 percent of Democrats were very enthused about voting compared with 64 percent for Republicans. But pollster Charles Franklin cautioned about reading too much into the numbers with the election seven weeks away.

"Who knows where we will be in October," Franklin said.

Both Republicans and Democrats were quick to point out the same poll two years ago at this point showed GOP Sen. Ron Johnson and then-candidate Donald Trump trailing in Wisconsin. Both went on to win.

"This poll is a snapshot of a very competitive race," said Jess Ward, campaign manager for Vukmir. The poll showed Vukmir trailing Baldwin by 11 points after the race had been about even in August.

The disappointing news for Republicans in Tuesday's poll showed:

The best news for Republicans was that Attorney General Brad Schimel had a 48 percent to 41 percent lead over Democratic challenger Josh Kaul. Ten percent were undecided.

The poll of 614 likely voters was conducted between Sept. 12 and Sunday. It has a margin of error of plus or minus 4.4 percentage points.

Evers campaigned Tuesday in Milwaukee with former U.S. Attorney General Eric Holder. A group Holder leads has been active in Wisconsin, spending $225,000 in the first six months of the year to help liberal candidates win in special elections for the Legislature and the state Supreme Court race , victories Democrats have pointed to as evidence of a blue wave and that fed Walker's warnings .

Also Tuesday, Walker was in Wausau to witness the signing of an agreement with Foxconn to jointly develop the state's ginseng industry and grow the Taiwan-based company's newly-established, Wisconsin-based brand.

Foxconn, a global electronics giant, is building a flat-screen manufacturing plant and campus in southeast Wisconsin, but it's been announcing smaller ventures across the state.

Vukmir has consistently voted against insurance mandates, saying they can lead to increased costs for consumers.

Vukmir, meanwhile, has been attacking Baldwin's reaction to the over-prescription of opioids at the Tomah Veterans Affairs Medical Center. Vukmir has accused Baldwin of not reacting quickly enough to the problem at Tomah in 2015, which resulted in a veteran who was a patient there dying.

Baldwin disciplined aides in her office for mishandling complaints about Tomah and sitting on an inspector general's report about problems at the facility. Baldwin co-sponsored a bill signed into law that toughened guidelines for prescribing drugs at VA facilities. It was named after the veteran who died, Jason Simcakoski.