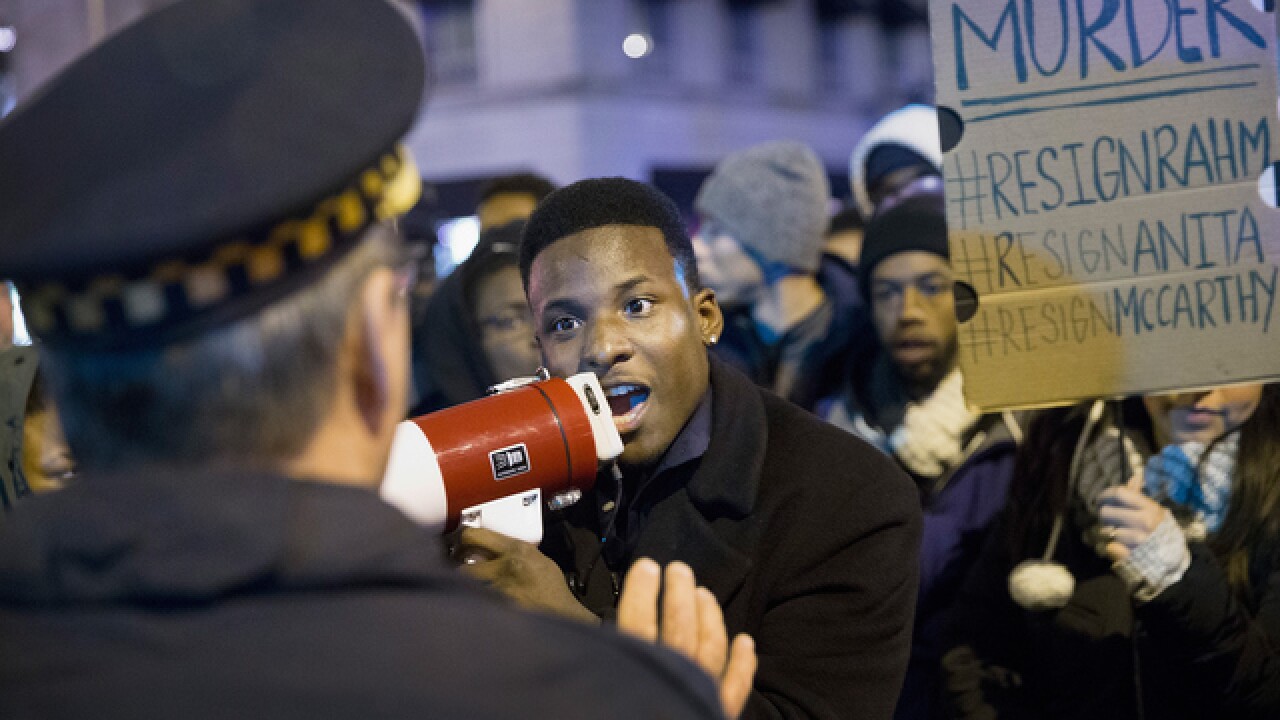 Scott Olson
<p>CHICAGO, IL - NOVEMBER 25: Demonstrators confront police during a protest over the death of Laquan McDonald on November 25, 2015 in Chicago, Illinois. Small and mostly peaceful protests have sprouted up around the city following yesterday's release of a video showing Chicago Police officer Jason Van Dyke shooting and killing 17-year-old McDonald. Van Dyke has been charged with first degree murder for the October 20, 2014 shooting in which McDonald was hit with 16 bullets. (Photo by Scott Olson/Getty Images)</p>

CHICAGO (AP) - Chicago is bracing for Black Friday demonstrations in response to the death of a black teen shot 16 times by a white police officer.

The Rev. Jesse Jackson is calling for protesters to march up Michigan Avenue in Chicago in response to the release of the dash-cam video showing the fatal shooting of Laquan McDonald.

The video shows officer Jason Van Dyke, who was charged Tuesday with first-degree murder, firing an entire magazine into the 17-year-old.

The 11 a.m. protest will take place from Wacker Drive to Water Tower Place, the heart of the retail section on the tourist-heavy street.

Jackson says the purpose of the protest is to "bring the attention of the world to Chicago and to call for change via mass demonstrations and voter registration.

Activist Mark Carter called on people to "rise up" and shut down the Magnificent Mile shopping area on Friday. Protesters also planned to target the Board of Trade and other landmarks in the coming days, he said.

Carter and others want the Department of Justice to investigate the Chicago Police Department and its history of covering up bad behavior.

The Urban League of Chicago joined in the call for a federal investigation, alleging a pattern of "discriminatory harassment" against black people.

The Rev. Jesse Jackson said other officers involved in McDonald's death should be fired or at least suspended. He also wants a special prosecutor appointed to the case, complaining that Cook County State's Attorney Anita Alvarez took too long to bring a murder charge in the shooting, which happened more than a year ago.

Obama said in a statement Wednesday night he was "deeply disturbed" by the video footage.

In a Facebook post, the president said he is asking Americans to "keep those who've suffered tragic loss in our thoughts and prayers" this Thanksgiving "and to be thankful for the overwhelming majority of men and women in uniform who protect our communities with honor."

Obama said he is personally grateful to the people of his hometown — Chicago — for keeping protests peaceful.