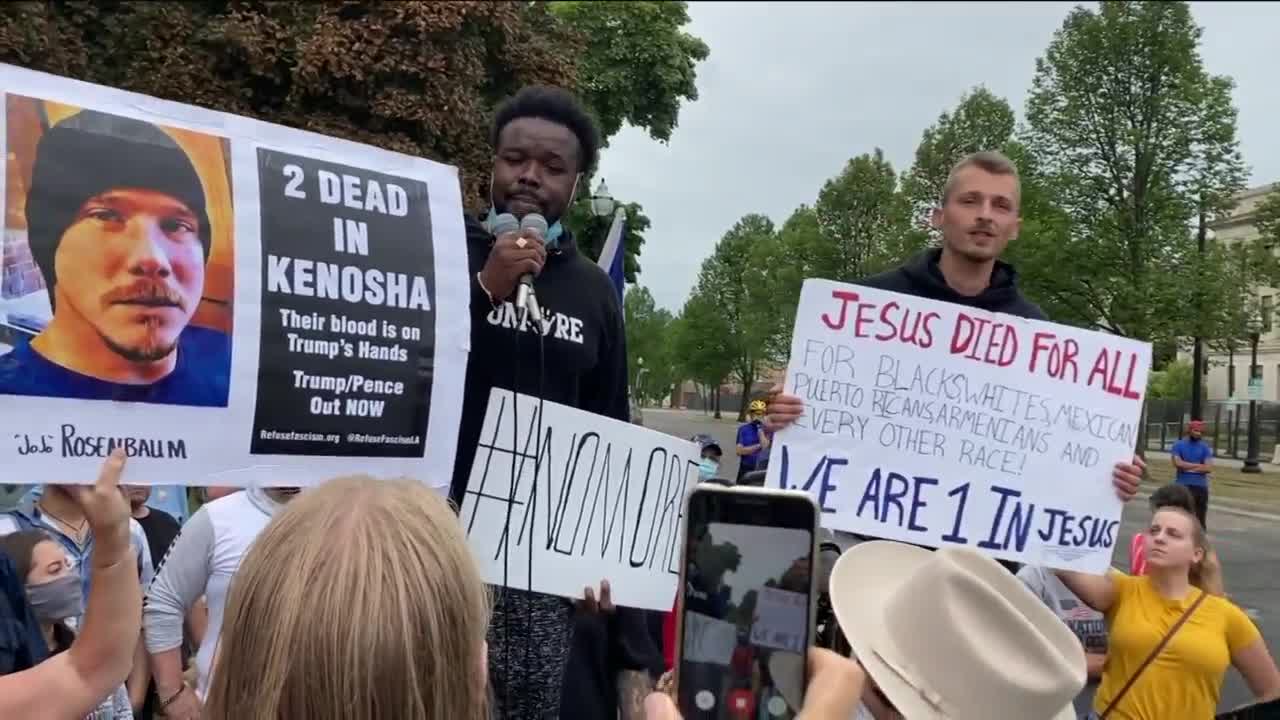 Crowds gathered in Kenosha on Tuesday as President Donald Trump met with law enforcement following a week of protests and unrest.

Around 10:00 a.m., near 56th Street and Sheridan Road, Trump supporters lined the sidewalks on the west side of the street. By noon, it had become a mix of Trump supporters and those in opposition. The first clashes between the protesters began.

“Our voices are not violent,” Cheryll Vandermillen of Minneapolis said.

Orange and Vandermillen had an extremely heated exchange about the President. However, minutes later, cooler heads prevailed. Both women eventually shaking hands, realizing they won’t change each other's minds but they at least got a better understanding of where they are coming from.

“I may have some change come to me from her story, I want to hear what her story is,” Vandermillen said. “But I don’t want someone to tell me that my raised voice is violence. If we need to tone it down, then ok. We tone it down. I really want to listen to your opinion.”

“It’s hard when you’re surrounded by everyone to not shout at each other because everyone is chiming in,” Orange said.

As things continued through the afternoon, tensions flared. Vulgarities were thrown by both sides. There were a handful of small physical altercations; a bottle of water poured on a woman, a bullhorn shoved out of someone’s face.

"We are not here to talk to them," a man named David from Kenosha said. He did not wish to share his last name but was in attendance supporting President Trump. "We've tried. We've tried multiple times, trust me. These people are not possible to be talked to. They have been brainwashed."

Things remained relatively peaceful though and, through the noise, some were trying to make meaningful connections.

“We can make this country great, but we have to do it together,” Lamar Whitfield of Chicago said. “There is no way we can do it with everyone being divided.”

Whitfield is with the No More Foundation out of Chicago. Throughout the afternoon, he was engaging with Trump supporters to listen and help others understand his point of view.

“I think people are passionate who are here about Trump but I think people are also passionate about the Black lives being taken,” Whitfield said. “That’s what we’re here for. I want to remind people, it’s ok to have passion but just remember to use it in a positive light.”