The president addressed local media affiliates ahead of his speech to a joint session of Congress.

TODAY’S TMJ4 political reporter Charles Benson was among a small contingent of reporters who dined with President Donald Trump at the White House Monday night.

Trump hosted the local reporters for a casual conversation with no cameras, most of it off the record and with no direct quotes allowed. 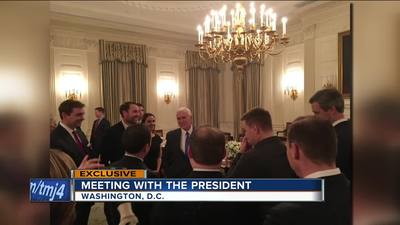 Trump did most of the talking, and discussed topics such as Obamacare, saying health care costs need to be less expensive. When asked about other entitlement reforms, Trump said he’s not going to touch Social Security.

The President also discussed fixing trade agreements, controlling cost overruns and spending more on infrastructure, along with his battles with the media and his reasons for tweeting.

Benson asked Trump specifically about economic issues specific to Wisconsinites, an the President shared that making better trade deals will be a big part of his speech to Congress Tuesday night.

Benson says Trump is reaching out to local news organizations because he believes a lot of supporters live in small towns in rural areas in places like Wisconsin.

Trump is also hosting a lunch with network news anchors on Tuesday.

Charles Benson will be in Washington D.C. to get reaction following Tuesday night’s speech.

Watch the MPS Spelling Bee Finals this weekend on TMJ4.com