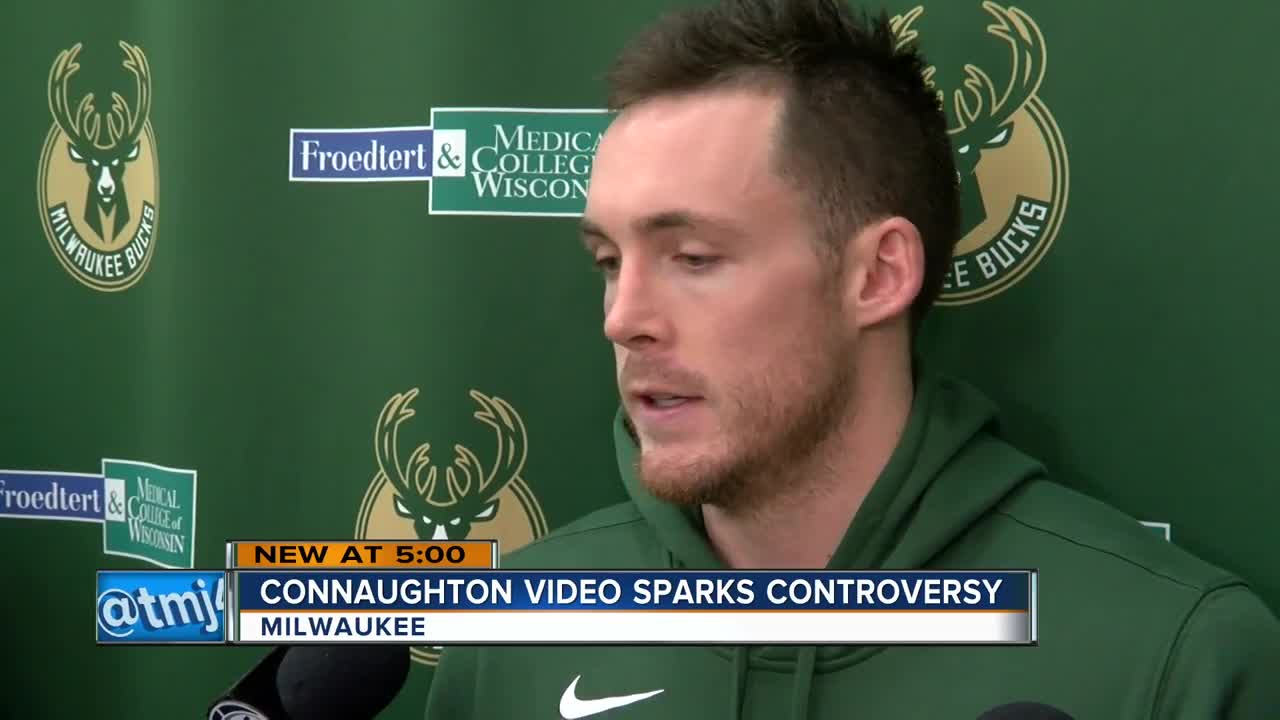 The video was recorded using Cameo, a platform where people can pay celebrities to read a script as a personalized shout out.

MILWAUKEE — For the first time, Pat Connaughton of the Milwaukee Bucks answered questions about a controversial video that surfaced on social media over the weekend.

The video was recorded using Cameo, a platform where people can pay celebrities to read a script as a personalized shout out.

During an interview Monday, Connaughton said he did not do his due diligence and was not familiar with the term referring to police.

"It's obviously unfortunate. I got to be more careful about the things that I read. I would say that the most unfortunate thing is that it happened," Connaughton said after practice.

The video in question shows the NBA player saying:

"Hey thin blue line. Have a great holiday season. We only back you when you come to the Fiserv. We don't take much overall pride with the blue. Remember Brad. Yeah, it was us. Have a blessed holiday once again. Sincerely, The Team."

The video is being perceived as negative towards police. It was shared in a law enforcement supporters Facebook group, but has since been deleted from Cameo. However, the site shows where the video used to be and that it was by The Team for Blue Line.

Connaughton also issued a statement Sunday apologizing for the video.

The Milwaukee Buck said he joined the app as a way to engage with fans, and typically the messages consist of birthday wishes or reading fantasy football names.

"The biggest disappointment in myself that I have is just that other policemen have seen it and you know other policemen based off seeing a video of me speaking into a camera probably think that's my opinion. I hope that they understand that it's not," said Connaughton.

A quick message from Connaughton costs $75.

Packers legend Brett Favre's price is $500. The former quarterback got in trouble with the Cameo app himself last year when he unknowingly recorded an anti-semitic video.

"I am surprised it doesn't happen more to be honest," said Michael Mirer, an assistant journalism professor at the University of Wisconsin-Milwaukee. His focus is on sports media.

Mirer says Cameo is an interesting way for people to connect with celebrities directly, but it can cause issues.

"It’s impossible to know the full context of what you’re saying when it’s just a random script put in front of you. I think it’s possible to catch some things but not others. But you just never know and that’s a risk everybody takes with Cameo," said Mirer.

Mirer says he would never advise people to avoid Cameo completely, but adds celebrities need to be careful. He also says teams might want to consider taking a more active role in their players' use of cameo.

Connaughton will take a break from the Cameo app and says he needs to do a better job using it in the future.