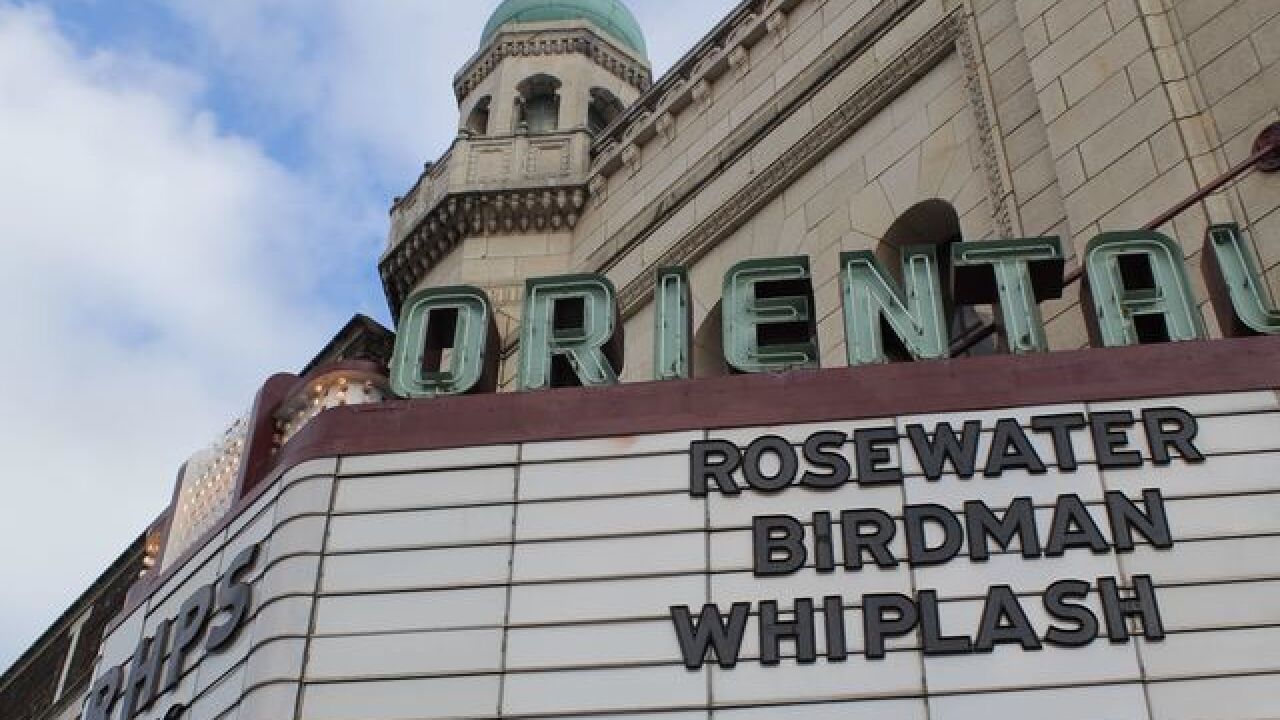 It's been roughly six weeks since the Oriental Theatre shut its doors for renovations. While the new owners, Milwaukee Film, made plenty of changes, the essence of the theatre has remained the same.

"We took a lot of care that what we did in restoring those spaces is true to form," Sara Meaney, Chief Marketing Officer for Milwaukee Film said. "There is really no experience like experiencing a film in the Oriental Theatre. Taking over this theatre has been a dream come true for the entire organization. It's something we've had on our radar for over five years."

When walking into the Oriental Theatre, nothing feels terribly different in the best way possible. The warm, inviting lighting feels the same as you approach the concession counter and the various Buddha sculptures in the main theatre still have a calming aura with a red jewel glowing atop their heads.

So while the aesthetics may feel the same, the film watching experience will be like nothing the theatre has ever seen before in its 91-year history.

"We've updated all of the projection and sound equipment," Meaney said. "We have the capability of showing 35mm and 70mm print films along with 2K and 4K digital projections. We are one of the very few theatres in the country that actually is certified to show archival quality films. What it means is, we can share more films, more types of films and a broader selection of films than this theatre could show in the past."

Another first for the theatre has nothing to do with the film watching experience but half of the crowds coming to the theatre will appreciate. The theatre, for the first time in its history, has a women's restroom on the first floor. Gone are the days of a unisex single stall or having to go to the second floor for women to use the bathroom.

But even the bathroom already feels like it has been a part of the Oriental Theatre since it opened.

"Custom tile work was done to match the original tile that people remember and actually admire in a bathroom," Meaney said. "Men will also enjoy an updated and upgraded restroom."

Although, for the time being, men will have to use the single stall while construction continues on the new restroom.

What all of this means is the Oriental Theatre will maintain the essence of what makes it a top 10 theatre in the country. However, with Milwaukee Film running it now, the future of the theatre's impact can expand.

"Our educational programming was mostly limited to the 15 days a year during the festival where we had access to cinemas," Meaney said. "We can serve a lot more students and educators at that time. In the past, we served almost 10,000 kids in a given year but now that we have a cinema we can control, we can do a lot more of that and teach a lot more kids and a lot more educators on how to use film as an educational tool."

Milwaukee Film will have the opportunity to share movies 365 days a year now instead of the two weeks during the film festival. It gives the community a chance to see more movies but also, allows them to receive increased funding.

"Having the Oriental Theatre as a part of the Milwaukee Film Organization's operation means we have more opportunity to grow and sustain economic development and community engagement we've worked on all along," Meaney said. "That will help us serve more kids, help build filmmaker economy through the Milwaukee Filmmaker Alliance and offer opportunities for professional development and community building as we have in the past. We now have a bigger cinema home in which to do it."

The funding will also help with renovations and upgrades the theatre is working on. The beauty of the theatre can be easily seen with the grand staircase, beautiful moldings and ceiling statues with green eyes. But with a closer eye, the roof needs help, the theatre seats are frayed and need to be replaced and they could use an upgrade at the concession stand. All in all, the goal is to put in about $10 million worth of work.

"Over the next three years we have several phases of restoration planned," Meaney said. "Quite a few things do need upgrading and restoring as a result of the age of the building. We're excited about rolling those changes out. Ninety-one years tells us a lot about how this building was built. We feel strongly with the right care and attention, we feel we could have another 91 ahead if not more."

To ensure that future, Milwaukee Film is working on making the Oriental Theatre a historic landmark. It would give them some much needed tax credits but also, prevent them of any future owners from making significant changes to the building itself.

"We in Milwaukee really have a gem we may have underestimated for a long time," Meaney said. "We believe in the importance of making sure it’s around for decades to come. To ensure people can understand the grandeur of that kind of experience that was intended when it was built all those years ago."

When Landmark owned the Oriental Theatre, they had a variety of movies from more rare options to blockbusters like Guardians of the Galaxy II. The same should ring true with Milwaukee Film choosing movies.

"People have opportunities to experience movies that may have otherwise missed Milwaukee all together," Meaney said. "The size of our media market often determines if distributors will bring films to Milwaukee. We think that's a missed opportunity for all of us. We're working hard with a variety of film distributors to make sure that the best of film programming lands in Milwaukee and lands right here at the Oriental. What that will mean is, as much as three to five times the titles you may have seen at the Oriental in recent years but it also means you can expect to see the same great independent and foreign and documentary films as you've come to know the Oriental for."

The Oriental Theatre is showing BlacKkKlansman and McQueen right now. Tickets will cost $12, though Milwaukee Film members will get a two dollar discount. They'll also have a merchandise store attached to the building. The front entrance will be next to Landmark Lanes, though it will be accessible from inside the Oriental. Crews are still working on construction for the store.