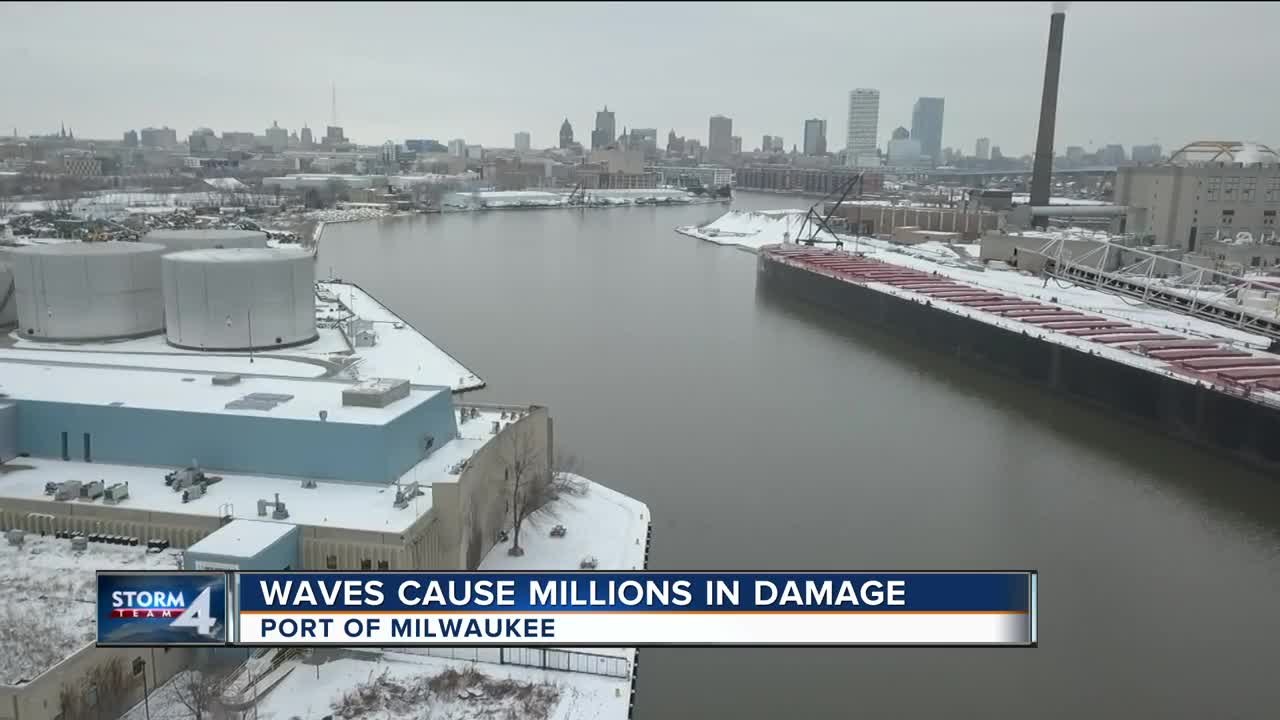 Port of Milwaukee authorities are calling the aftermath of Saturday’s heavy winds and waves along Lake Michigan catastrophic.

MILWAUKEE — Port of Milwaukee authorities are calling the aftermath of Saturday’s heavy winds and waves along Lake Michigan catastrophic.

Port of Milwaukee Director Adam Schlicht said they were able to partially reopen Monday, allowing a 1,000-foot cargo vessel to dock, but a majority of the port remains unusable due to the damage.

Giant potholes, torn apart fences and flooded buildings are just some of the port’s damage from Saturday’s gale-force winds and 15' waves that proved to be too much for the break-wall to handle.

Schlicht said the damage is already in the several-million dollar range with emergency crews still assessing on the ground.

“The wind blowing that much water onto the port is really a once-in-a-generation catastrophic event for us,” he said. “We don’t believe we’ve seen anything like the type of water that was present here at the port or the type of wind-related damage that we’ve seen in several decades.”

Schlicht considers the Port of Milwaukee a hidden economic gem for the city of Milwaukee. The city-owned port handles 2.5 million tons of cargo each year making it less expensive for local manufacturers and businesses to import or export goods to destinations across the world.

That wasn’t the case on Monday as several ports sit empty and damage from the storm on-land and in the later could take months to repair.

“My concern is that for each day that we are at partial operations means that our ability to create a productive and profitable return to the taxpayers is diminished,” Schlicht said.

A short drive down to South Shore Yacht Club shows more of the same. Some portions of the Lake Michigan break-wall are no longer standing.

“The waves were about in the 15-foot area and if you look at that break wall, you might have 8 feet there or less,” said yacht club commodore Peter Engel. “The worst direction the wind can come from around here is the northeast and that’s where it was all day Saturday.

Engel said all of the yacht club’s 200 docks and slips were at least partially damaged. Many of them washed to shore where volunteers tried to salvage the wood.

Engel worries a ‘next time’ is inevitable unless the break-wall is built much taller to accommodate for current lake levels.

“It’s predicted to go another foot higher by July so we’re afraid if we get another storm in the summer it’s really going to cause a lot of damage to people’s property and boats,” he said.