My Block: Grasslyn Manor, the unique neighborhood within Sherman Park 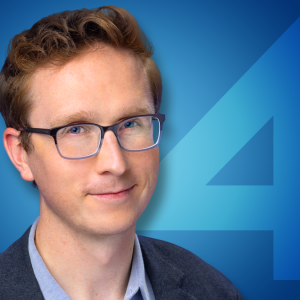 As we continue the My Block series, we introduce a diverse, historic, and friendly neighborhood within a neighborhood. Welcome to Grasslyn Manor, part of Milwaukee's Sherman Park.

In this edition of My Block, I meet Steve O'Connell, so he could show me his neighborhood through his eyes and experiences. Where we go, who we meet, and what we do is all up to him and his neighbors. There's no script to follow. I just hit record and the rest is up to the neighbors.

There is no better way to learn about a community than by diving head first into it with the people who know it best. This is an intimate look at a neighborhood within a neighborhood.

"Oh its been an excellent neighborhood to live in, and the beauty of this neighborhood also is all of us know each other, and all of us work very closely together," Steve said.

Steve has lived in Grasslyn Manor for 34 years and is a pillar of the community. He had seven people in mind that he wanted to include to show off Grasslyn Manor (which is a My Block record). As it turned out, we even ran into more people he knew just as we passed by houses.

One of our unplanned visits was his neighbor down the block, Ms. Nancy.

"Everyone’s friendly. We watch out for each other. If I see something, I call her. I call her. If we leave our garages up, we shut them for them, you know. We’re great," Ms. Nancy said.

All eight people had such incredible things to say about the community. It wasn't possible to fit them all in the video, but each person was equally important to creating a unique neighborhood vibe.

In the end, it's not the streets or the houses or stores that make a neighborhood what it is. Rather, it's the people inside that give the character and quality to a community. It's waving to neighbors across the street that creates a sense of togetherness. It's even more important to accept everyone even if that one neighbor is the 'soon-to-be crazy woman.'.

"I'm likely going to be the crazy lady on the block," Lauren Poppen said. She was the youngest person Steve introduced me too.

She has one of the oldest houses in the neighborhood. Lauren is refurbishing it but also plans to give the house a unique flair.

"I'm currently painting mannequins to install in my front yard," she said.

They will all have hoop skirts that act as a trellis plants can grow on.

"I want it to be a fun place that people can just see and go, 'oh yea I love walking by that house.'"

You wouldn't be able to tell by her colorful wardrobe and plans to put intricate mannequins in her yard that she is actually an accountant.

"Everyone who meets me makes the face you just made. I can’t believe you're an accountant," she said.

When young and new flair like that is paired with someone who has lived in the neighborhood for 26 years, a special atmosphere is created. Introducing Gerry Baldwin.

"This is where I raised my kids at, and they’re doing well, " Gerry said.

He couldn't love the neighborhood more, and Gerry says the entire community is very proud of where they come from.

"Among ourselves, we have a great reputation in terms of who we are, what we stand for, and what we work for to keep the reputation at 100 percent."

However, outside of the neighborhood that changes, he said.

"But the reputation from the city itself and from the news networks is always negative."

It's something Steve recognized too, but he thinks it's an outdated and incorrect perception of Grasslyn Manor and Sherman Park all together.

"There are problems, yes. We do stumble, yes. We did have the disruption a couple years ago, but we're back," Steve said.

The true identity of the area rests in the neighbors who are model citizens and are active within their community to try and make it better - people like Mabel Lamb and Deborah Ford-Lewis.

"I love my neighbors, our housing stock, the community, the diversity, everything," Mabel Lamb, the executive director of the Sherman Park Neighborhood Association said.

"How do you describe neighborhoods you can walk in and enjoy your walk cause you see all sorts of different homes you see neighbors," Deborah Ford-Lewis, the president of the Sherman Park Neighborhood Association said. "Don’t let us be defined by what you see in the press. You have to see. You have to experience living in Sherman Park to really appreciate it."

No one embodies that 'see-it-to-believe-it' attitude more than Adriana Miranda. When she was house hunting, Adriana looked all over the city; however, she fell in love with Grasslyn Manor.

"I don’t think you find that very often in other areas where you feel that sense of comfort where you can leave your children with somebody else, and you know that they’re going to be safe," Adriana said.

Other than safety, one of the things Adriana appreciated most about Grasslyn Manor was the diversity. She said it was paramount that her children grow up around other cultures.

"One of the first people that I met was my neighbor across the street - Jamaican married with an African-American. Then I have my neighbors to my side who are White."

She said she has seen a few Asian families as well. Grasslyn Manor is also known for having a strong Hasidic Jewish community.

"Acceptance of other peoples backgrounds, and I’ve very much come to find that out here," Adriana said.

It's the togetherness and welcoming spirit that makes walking down the street that much more enjoyable. It's one of Charmin McGlaston's favorite parts about Grasslyn Manor - taking a stroll and making small talk.

"I love that you can walk out of your house. You see your neighbor. Your greeted with a hello."

Simple yet important. It's what sets the foundation for a connected neighborhood. Simple small talk became more difficult during the pandemic. Neighbors couldn't see each other as easily. Nonetheless, a neighborhood this close, couldn't be kept away from each other.

"Neighbors are still out taking walks. We see each other. We stop. Have a quick chat. We maintain the physical distancing. I don't like to say social distance."

"I feel like were a little hidden gem inside Sherman Park. There are a lot of beautiful areas in Sherman Park, and I think our area is one of those hidden gems - hidden - so it’s kind of different."

Grasslyn Manor is full of unique architecture, but it's best represented by one vintage house - 3840 N. 55th St.

"The home was actually designed back in 1933 and the architect was Henry Philip Plunket, and it was part of the 1933 home show," Steve said.

In fact, it was the 1933 home show design winner. It was part of the 1920s and 30s European style that, "represented in their works a reductive cubic geometry which was inspired by the new abstract paintings and early domestic work by Frank Lloyed Wright," according to Wisconsin Historical Society.

Currently, Steve's friend Beverly lives there. What makes this important is that the historicity of the community lays within the neighbors, the immediate stake holders, not third parties.

I couldn't do a story on Grasslyn Manor without mentioning the iconic Sherman Perk at 4924 W Roosevelt Dr, Milwaukee. It's a coffee shop, but it's also so much more.

"People have bought and sold homes. People have started dating. People do business together," owner Robert Olin said. "If you don’t have a social place, space to meet sometimes those relationships never would have been established."

For the past 19 years it has been the cornerstone of the community brewing coffee and relationships.

"Over half of our customers are from our immediate neighborhood," Robert said.

It's also a historical landmark. The Sherman Perk is on state and federal lists for historic places. The building was built in 1939 and was an operating gas station until 1989. It's one of a few remaining gas stations built in the streamlined moderne style.

For the fans of the show Friends, the inside and name of the cafe might resemble the iconic coffee shop from the show, Central Perk. As to whether or not the Sherman Perk was inspired by the show, "This has not been confirmed, and no one cares, because it is too good of a name not to use," the Sherman Perk website said in a tongue-in-cheek manner.

But neither the name nor the quality of coffee are as important as just the physical space the cafe has fostered to create fond memories, moments of laughter, and life long friends.

As is customary with My Block stories, the final word is given to the tour guide. The last thing I asked Steve was if there was anything else he'd like to say about his neighborhood.

To submit your neighborhood for a feature or know of someone who would like to be part of this, email james.groh@tmj4.com or call him at (414) 254-8145.