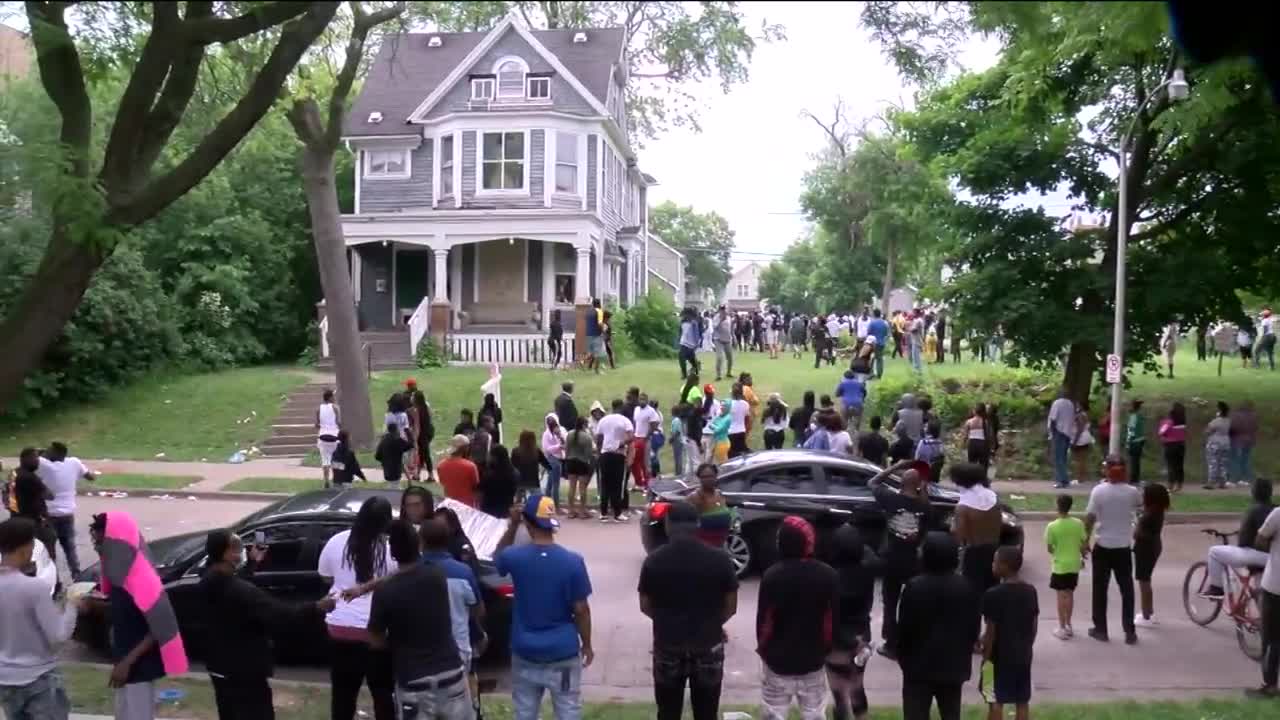 Chief Alfonso Morales responded to Tuesday's unrest on Wednesday, saying the group was wrong in what they did.

MILWAUKEE — Milwaukee's Police Chief is speaking out against the violent incidents near 40th & Lloyd Tuesday night.

"I think the group of people there were totally wrong in what they did," Chief Alfonso Morales said. "To take action in their own hands on misinformation."

Morales says, the group who formed around a home near 40th & Lloyd Tuesday night, looking for answers related to two missing teenage girls, reacted to a rumor about the home being used for sex trafficking and thought the girls could have been victims.

"We did not come up with any facts on what the crowd was there for," Morales said. "A sex trafficking house? Not correct. Information was not corroborated so a house was burned down, three people were shot, several officers, a firefighter injured trying to put out a house fire. This is not right. I don't think anyone can condone that. At what point do we say enough is enough and look at the leadership running these mobs saying, you have to stop it."

Morales did applaud the work of some of the community leaders, like Tracey Dent, for trying to maintain peace.

In speaking to members of the community, many point to being heavily policed as a reason for mistrust in law enforcement.

"I can tell you, we have 14 neighborhoods that account for 45 plus percent of our gun violence," Morales said. "We have 190 neighborhoods in the City of Milwaukee. When we police those 14 neighborhoods, you say there's a level of distrust within the police department. I'd agree with you. But what about the other neighborhoods? I bet you'll see a difference of opinion."

"To paint us all with a broad brush is also infuriating," Assistant Chief Regina Howard said. "Many of us out here on the street, who have integrity and believe in working with the community, and we love this community, we're out there to make a difference. That's why we joined this agency."

Howard pointed to the duality she faces as an African American police officer. She acknowledged, as a Black woman, she has faced prejudice.

In speaking about the mistrust the group felt towards police about sex trafficking, Howard also pointed to a personal trait among all of the officers in the room; they are parents.

"There is no way any o fun would want a sex offender or some sort of sex trafficker running around the community with impunity," Howard said. "Snatching kids and taking kids off the streets. That means we're putting all of our children in jeopardy, willfully. I don't think any of us are willing to do that."

The group grew in size after protesters arrived from a nearby demonstration who were part of one of the many recent marches on police reform in the name of George Floyd.

"I think this group lost credibility by doing what they did yesterday," Morales said. "It took away any impact of a message that people are upset. Yesterday were all criminal acts. There was a mob that went out there. I don't want to say they took the law into their own hands because what they did was completely unacceptable."

Howard made a big distinction in what she saw Tuesday night.

The advice from Milwaukee Police about this incident was to fact check.

"When on a spacious premise that individuals concoct these things, urban legends and rumors," Assistant Chief Michael Brunson said. "All of this is a result of that. That's untenable and unacceptable situation for our city. We'd ask anyone engaging in social media posts to verify things. These are the ramifications we see from something that's false. That's unacceptable in our city."

"The information we were getting yesterday was rumor," Acting Assistant Chief Paul Formolo said. "We can't take police action on rumor necessarily; meaning forced entry into a residence to arrest people. We have to establish probable cause. The information we were getting yesterday from that mob did not help us establish probable cause. We had to continue the investigation. We're not going to ignore rumors or anonymous information because sometimes, that does lead to legitimate investigations. But there is a process we have to follow."

Chief Morales says Tuesday's actions will have no impact on how they police future protests or interact with future protesters. However, they are continuing to investigate the incident near 40th & Lloyd and will charge those who were involved.