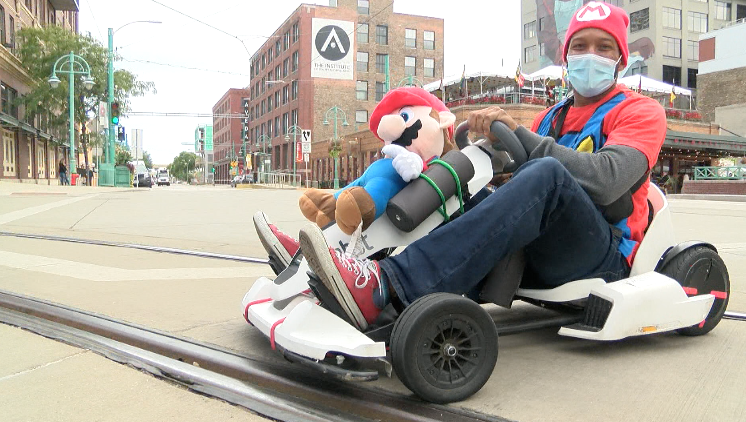 Cars pull over and faces press against windows to get a glimpse of Milwaukee Mario as he drives his go kart down the street.

Schaffer actually lives in Chicago, but he often comes up to Milwaukee. In fact, he has come so much, he has become a recognizable figure in the city, which is how he got the nickname Milwaukee Mario.

He drives through areas like the Third Ward in a Mario costume, blasting the Mario theme song, in a go kart with a Mario doll tied to the front.

"With the pandemic going on, people they aren’t having fun like they used to, so to see me riding around that instantly brings joy," Milwaukee Mario said.

It's a simple concept, but it has a big impact. As he blasts the iconic song, people walk onto their balconies, press their faces up against windows, and pull their cars over to get a glimpse of Milwaukee Mario. Many people ask him to take a picture and he happily obliges - even when he isn't in character.

"It just get weird like when people recognize me when I'm not Mario. Like when I'm like in the grocery store or something, 'hey are you the Mario kart guy? Can I get a picture with you?'"

He offers more than just a photo opportunity. Schaffer will let most people drive his go kart too. He offers and sometimes they ask. It goes about 15 miles per hour. While it's not street legal, he has taken it onto roads, but it hasn't ever been dangerous. A few Instagram posts even show police in various cities taking the go kart for a ride.

Schaffer is a Mario fan, but he didn't anticipate this fame. It all started on June 27 when he bought a go kart from Target.

"I was just riding it around without the Mario theme, and so a lot of people kept saying it looked like a Mario kart. So I got the idea to buy the doll and dress like Mario and play the song and that created this like larger than life character," he said.

He has since taken the show on the road. From Chicago to Milwaukee to Indianapolis to Cincinnati to Columbus to Des Moines and many places in between.

Milwaukee Mario is just one persona of Josh Schaffer. He is a storm chaser, content creator, and has aspirations of being a professional wrestler. He hopes that his Mario character can help him increase his following.

However, most importantly, Schaffer wants to be a beacon of hope. Whatever he does, he hopes it makes people happy and gives them a chance to laugh, smile, or forget their worries even if it's just for a moment.

"I just want to let everybody know I'm just trying to bring positivity to the world, and to like watch for me riding around give me a wave give me a holler."