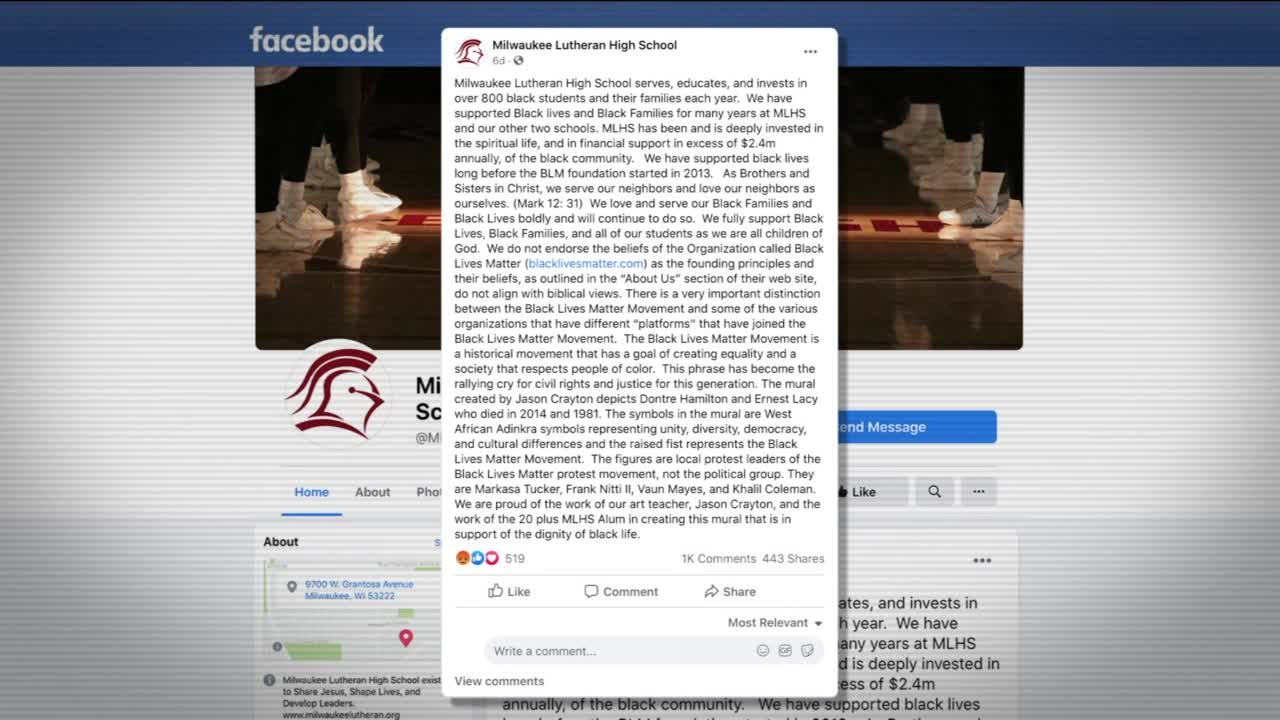 "That just goes to show that we weren’t the only ones," said Monte Berry, a Milwaukee Lutheran High School alum.

Monte graduated from the school in 2015 and started the recent videos. He remembers a time he was the only black student in a pick-up game of basketball.

"One of the white students goes to another white student who was on my team. He says 'well of course you guys won you had the monkey on your team,' and I was just like 'really?'" said Monte.

Shiane Lang graduated the same year. She says when it came to the dress code and behavior, white students and black students were treated differently.

The school's Facebook post that sparked backlash stated they support black lives and families, but do not support the Black Lives Matter organization pointing to their "About Us" section, adding it does not align with biblical views.

In response to an interview request school leaders sent an email with an attachment condemning racism adding:

"We are saddened by the divisive nature of the comments surrounding this issue. The intention of our post was to affirm that we love our black students and their families while acknowledging our Christian values."

2004 alum Monique Liston was not surprised by the claims and shared she had her own run-ins with racism at the school. She agrees with Monte and Shiane, saying the experiences pile up on teenagers.

"Some of the feelings that are included are thinking you are less than that you have more to prove. That it's going to take more work for you to do exactly the same as your white counterparts," said Monique.

Monique is one of the former students who met with school leaders on Monday.

"It's really thinking very intentionally about what does it mean to then recognize this as an issue and then begin to work on it," said Monique.

Monte, who also met with school leaders, says the post opened the door to a bigger conversation.

"Our big concern is you saying you support black lives but we don’t really feel the support or we don’t see the support. You can say in the statements yeah we support our 800 black students but where is it? That’s where we want to focus on more," said Monte.

Even five years after graduation Monte says he is committed to bringing change.

"It’s something that really means a lot to me because like I said, I didn’t have the worst experience there. I met a lot of great people, had a lot of great relationships with those folks there. I hate to make it look like I’m trying to tear the school down because it’s not what I’m trying to do, but I will do what’s necessary to help those who are coming after me, have a better experience," said Monte.

In addition, we know that these are controversial times and we are saddened by the divisive nature of the comments surrounding this issue. The intention of our post was to affirm that we love our black students and their families while acknowledging our Christian values of, Love God and Love Others. As a faith-based institution, we affirm the Bible passage from Mark Chapter 12: verses 30-31. “Love the Lord your God with all your heart and with all your soul and with all your mind and with all your strength. Love your neighbor as yourself. There is no greater commandment than these.” In June 2020 we had several meetings with our black teachers, administrators, and staff (People of color make up approx. 20% of our entire teachers, staff, and administration at MLHS) and those meetings are continuing. We are also meeting today with a group of Milwaukee Lutheran alumni with the intent to listen and understand their experiences when they attended Milwaukee Lutheran.