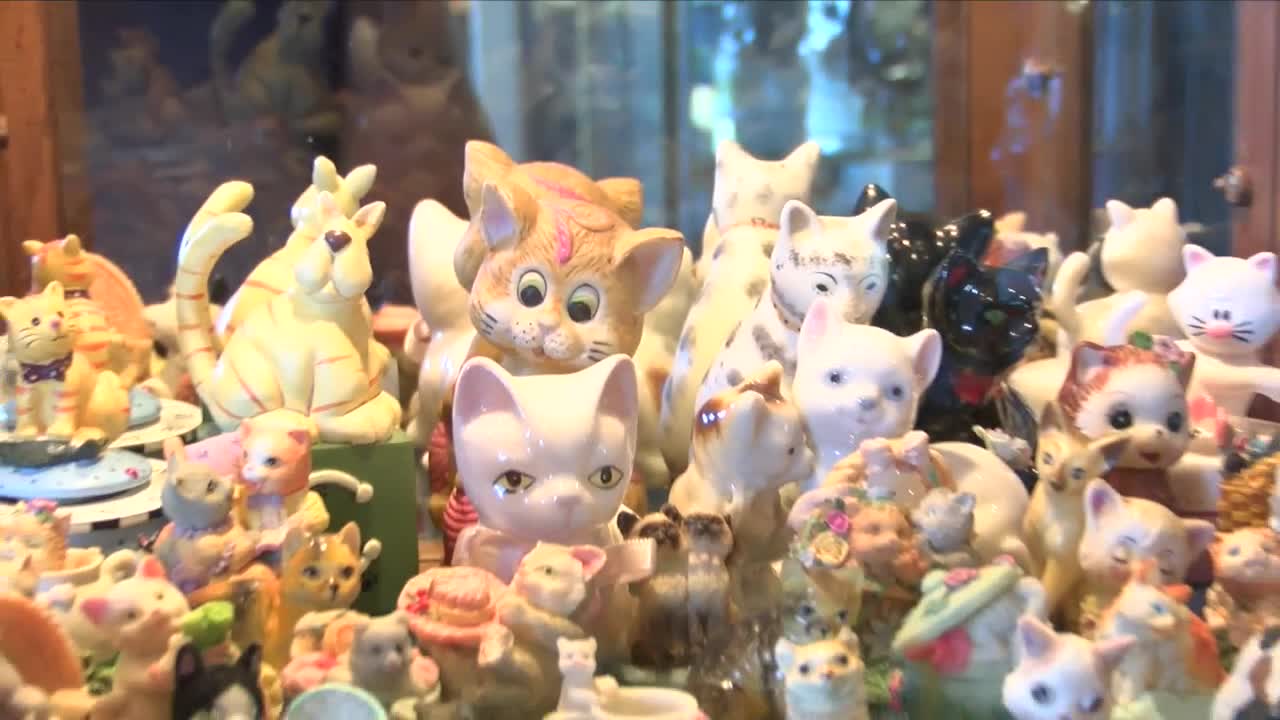 A Menomonee Falls couple has transformed their house into a cat museum with over 2,000 cat-themed items inside.

They have rescued dozens of cats, adopted 7 and are about to add another to their home, and they just recently turned their home into a cat museum with over 2,000 cat-themed figurines, plates, stuffed animals, paintings, photos, and anything else you could think of.

"We just started collecting cat figurines and cat art because we had (six cats at the time), and we just thought it was fun and something to do," Shawn Redner said.

"In the hopes that we can help raise money for the smaller shelters that really really 50 bucks or 100 bucks would really make a difference to them," Shawn Redner said.

Almost every inch of wall space is covered with some type of cat painting, photo, and plate. If not one of those three options, it's a cabinet filled to capacity with thousands of figurines.

The vast majority of the items are second-hand. The couple shops at places like Goodwill and receives donations to decorate their house. Some of their memorabilia date as far back as the 1920s.

You might think that once space is gone, they would stop collecting. Guess again.

"I think there's 80 cat plates just in the kitchen. We have a whole bin full of cat plates we need to get on the wall," Shawn said.

And they are getting more paintings and photos too.

In fact, to make more room for everything, the two don't even sleep in the master bedroom.

It's like a time capsule of cat art inside their home. The two estimate they have spent at least $2,000 on all of it.

The museum isn't open to the public regularly. The next time people could wander in is Aug. 16 from noon to 6 p.m. However, they said you can schedule a private tour anytime you would like. Masks are required.

Admission is $5, and it all goes to rescuing cats.

Hopes of becoming a non-profit

They plan on adding another to their family and will stop there. However, all the admission money will be donated to local charities to help them rescue more cats.

The museum even has a large hand-made cat play area for their rescues.

The ultimate goal of the museum is to transition into having their own rescue adoption center.

"There's too many cats that need homes, and I'm hoping that we can kind of help out with having an adoption center," Shawn said.

Shawn doesn't classify himself as a 'cat person.' He even said if he could get dogs to be as self-sufficient as cats he would have a bunch of dogs too. (The couple likes to go on long motorcycle trips where he is gone for multiple days.)

The journey to adopting his first cat was completely by accident.

"I moved here to Milwaukee and the previous tenant wasn’t out on the 1st. By the 15th, I had to ask her physically move herself from the premises, and there was two cats that I agreed to take care of, and that's where it started."

Fast forward a few years, and him and his wife adopt for a few more cats. Just because they had cats, didn't mean they thought one day they would turn their home into a museum.

"It was right around November of 2018 is when we bought our first little art piece," Shawn said.

Then it exploded. In almost two years, they went from zero cat decorations to literally not having any room for more.

Now, he and his wife, together or separate, will go on long drives just to buy a new piece of art for the museum. The farthest Shawn has traveled is Peoria, Ill. He even took a day off from work to pick the new additions up.

The couple hopes that their new museum becomes popular for its quirkiness and mission.

Donating to charity and rescuing cats is the main purpose; however, they wouldn't mind getting known for some of the weirder items inside the house.

***A note from Reporter James Groh who did the story. I am very allergic to cats. I forgot to take allergy medicine before going. I stayed for about an hour and a half, and ended up not needing it at all. The house/museum is very clean. Cat hair from their seven (soon to be eight) rescues do not coat the floor.