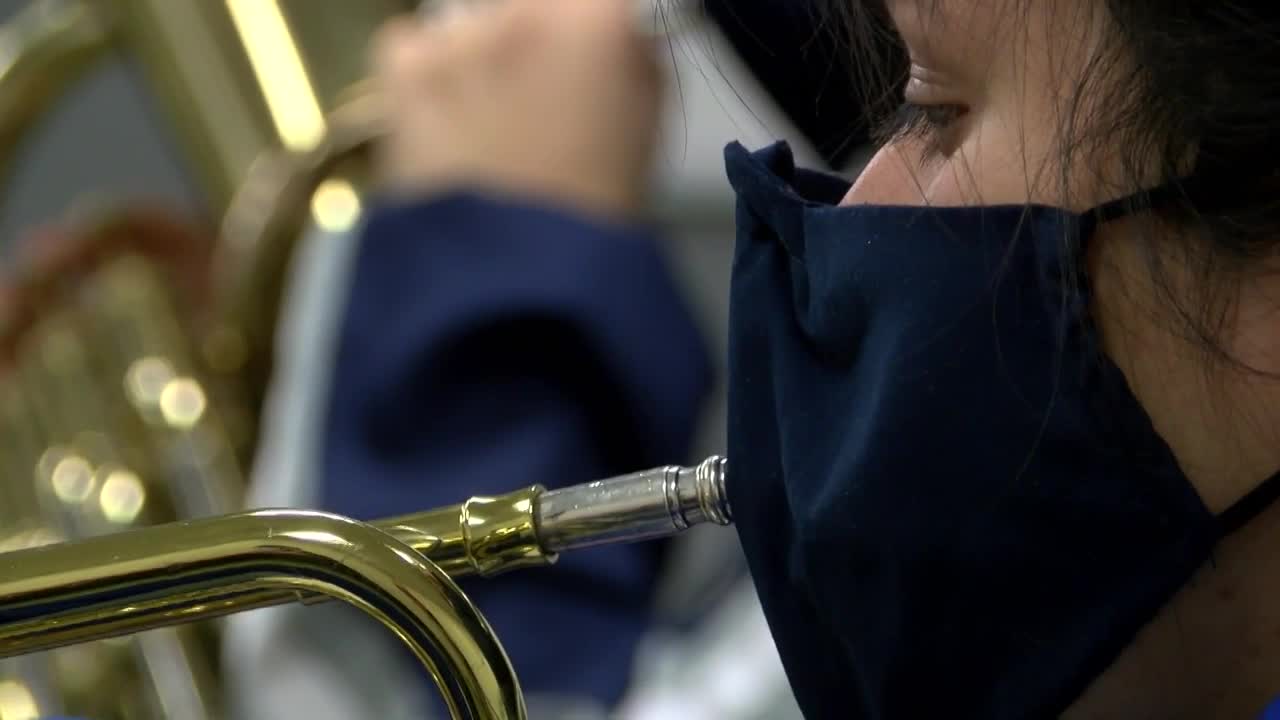 If it weren't for a slight modification to a thing we have all become very familiar with in the past year, the music would have stopped - literally. However, the horns continue to ring out thanks to a new kind of face mask meant specifically for musicians.

MILWAUKEE — If it weren't for a slight modification to a thing we have all become very familiar with in the past year, the music would have stopped - literally. However, the horns continue to ring out thanks to a new kind of face mask meant specifically for musicians.

“There’s actually a slit in the middle and when I flex my face it opens, so I’m able to insert the mouthpiece into there and blow like normal," Hannah Van Der Karr, a senior baritone player and president of the Marquette Bands said.

Don't think that it's just as if someone cut a hole the middle of a mask. It's specifically designed to open and close around the mouthpiece of the instrument to prevent the spread of airborne germs. For wind instrument musicians, this is crucial.

Q: How do you play in a band - brass and woodwinds specifically - during a pandemic?

A: Specialized masks that prevent the spread of airborne germs 🦠 but still allow you to play your instrument. pic.twitter.com/32llj1gUgr

"It's kind of a difference because you want to take a big deep breath in and out, and it's kind of hard with the mask. It kind of forms a suction on your face, so it makes it kind of hard to get that good deep tone, so I found myself really spreading my mouth more than I would normally to get the air from the middle of the mask instead of the sides where it gets closed," junior trombone player, Bailey Lewis, said.

This works for all wind instruments too.

"The hardest one was the flute, and what we ended up having there is a mask where the entire head joint of the flute goes inside the flute so there’s nothing coming out," Erik Janners, the director of the music program said.

As innovative as this mask alteration was, it didn't come without it fair share of growing pains.

"Definitely for starting out with the masks on was a little difficult to kind of get used to it and making all those adjustments that you needed to," Lewis said.

Months of rehearsal later, the bands are sounding as good as they would normally.

Specialized masks are one of the few modifications the university took to ensure the band could keep playing. Others include covers at the end of horns and absorbing pads to catch any condensation that might drip off the instrument.

“Normally the wind ensemble is 55 to 65 people. This semester we are rehearsing in groups of five, six, eight in these sort of chamber ensembles that allows the activity to keep going," Janners said.

Instead of an audience, the band performs for cameras live streaming the concert. Instead of large orchestras, it’s small group performances. But the most important thing remains the same - the music is still beautiful.

"It keeps us together. It keeps me going. It's the only reason I leave my house weekly. It's genuinely the only half-hour I get out of the room, so I am so grateful that we can continue," Van Der Karr said.