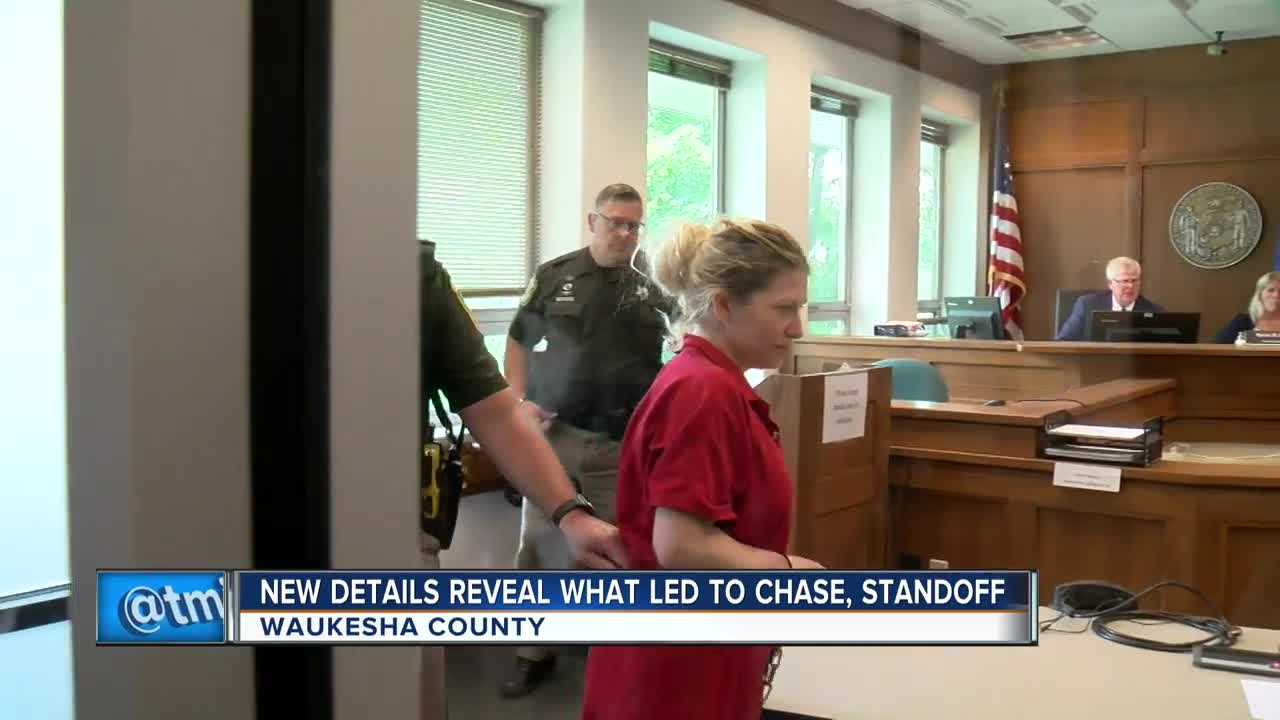 The woman who was involved in officer-involved shootings that closed Interstate 94 and Highway 67 on June 4 is facing additional charges. 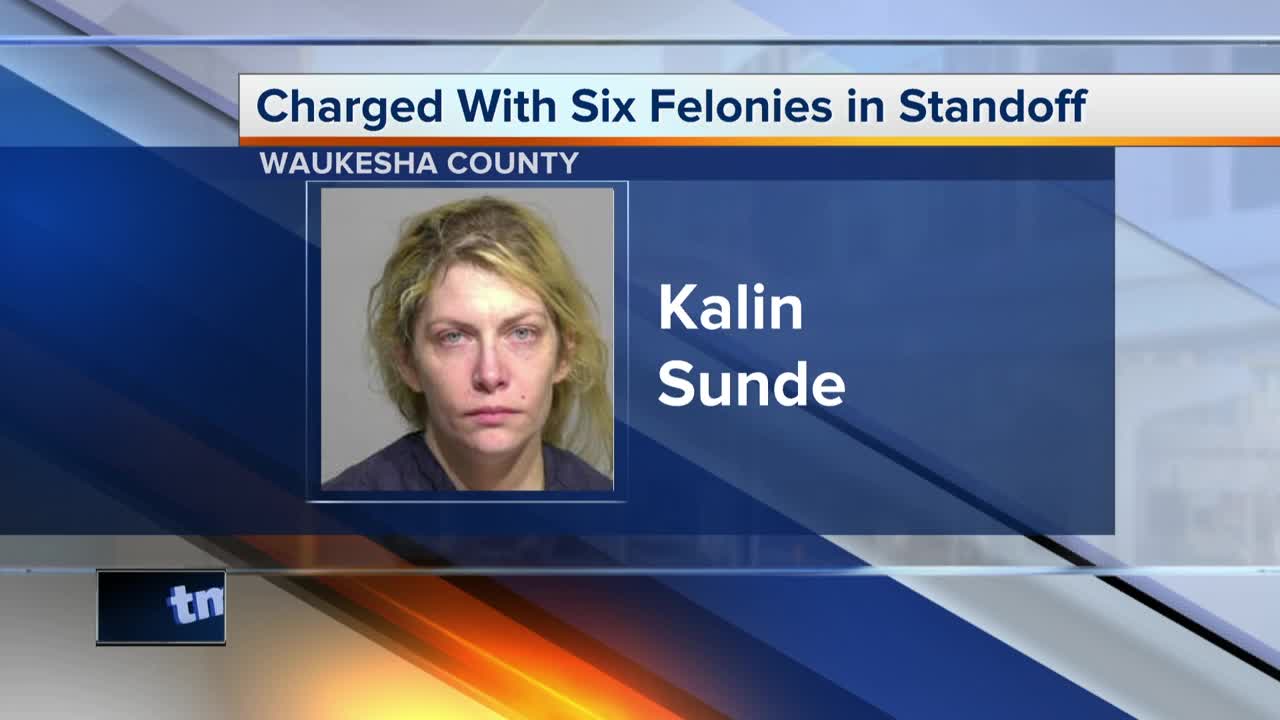 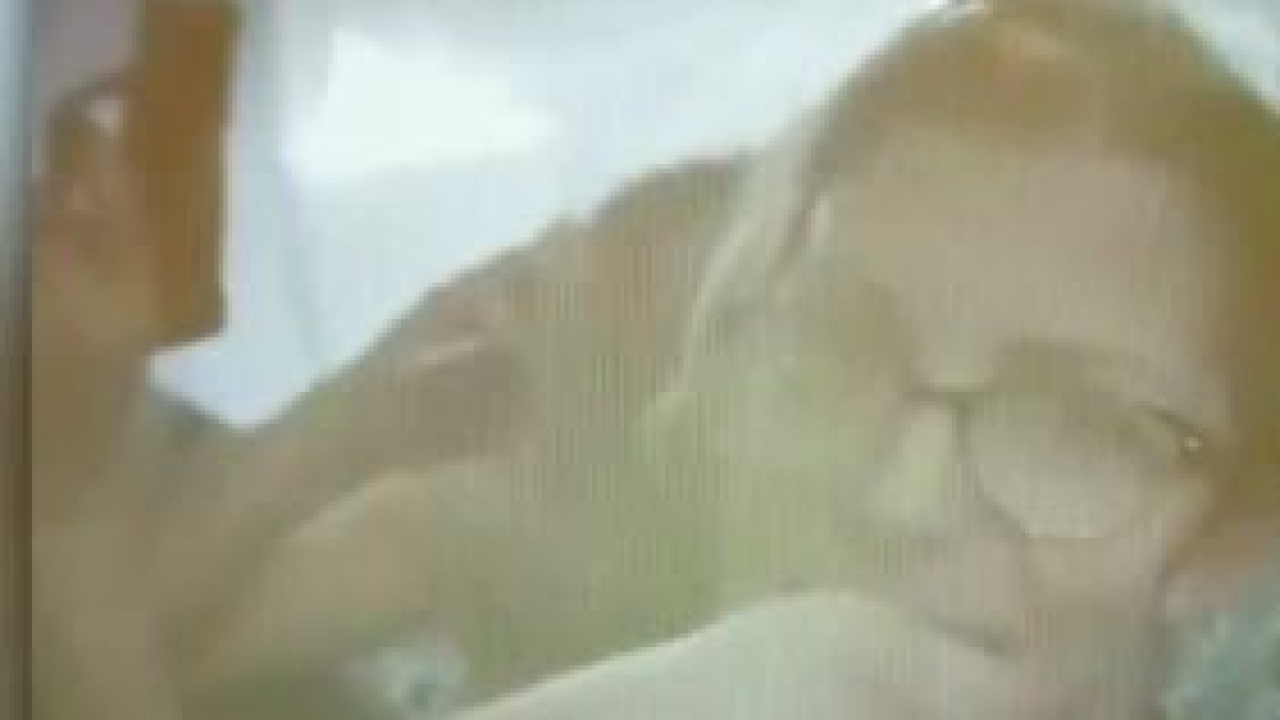 WAUKESHA — A woman who claimed she was being held hostage during last week’s standoff turned officer-involved shooting on Interstate 94 in Waukesha County was an active participant in the incident, according to court documents.

On Tuesday afternoon, 31-year-old Kalin Sunde, who livestreamed the series of events on Facebook, was charged with multiple serious felonies in connection to the chaos that ensued and closed I-94 and Highway 67 on June 4.

Sunde appeared in Waukesha County Court dressed in a red jumpsuit. She was charged with driving or operating a vehicle without the owner’s consent, felony bail jumping and two counts of failing to comply with officer’s attempt to take a person into custody — one for herself and one as a party to a crime. Sunde also faces charges for allegedly striking a police animal using a dangerous weapon causing injury and attempting to flee or elude an officer.

It marked her second appearance in the courthouse in less than a week. On Friday, she was charged for allegedly resisting an officer inside the hospital after she was arrested, as well as felony bail jumping.

The criminal complaint details a lengthy pursuit leading to the high-profile standoff, which led to an officer-involved shooting on I-94 in Oconomowoc.

DNR Warden Adam Strehlow said at the start of his shift he was alerted to a suspicious vehicle that had been reported earlier that day by Park Superintendent Anne Korman at the Kettle Moraine State Forest.

Korman reported Sunde appeared to be dazed and nervous. Korman spoke with Sunde, who returned to a gray Dodge minivan and drove away. Strehlow later encountered the same vehicle, which did not have the required State Park entrance sticker on its windshield.

Strehlow said he told the vehicle to stop, but he said Sunde drove off. A man was lying in the middle seat and appeared extremely lethargic, according to Strehlow.

The warden said the vehicle traveled north on Highway N at about 80 mph. The chase continued at varying speeds, moving onto Highway 67. The warden said he observed the male suspect getting up and falling down several times in the back seat of the van. Strehlow also said the man appeared to be digging around and looking for something.

Multiple squads joined in the chase, and stop sticks were deployed a number of times. As a deputy got close to the vehicle, the warden observed the male subject leaning out the front passenger seat, reportedly holding a black handgun in his hand. The warden said the male initially pointed the gun at his squad and then shifted the gun to the deputy that was closest to him.

At about 4:30 p.m., the standoff began. Deputies tried to negotiate with Sunde and the male subject, identified as Nathan J. Halfmann, whom Sunde called her boyfriend. Sunde reportedly told a negotiator Halfmann had a gun to her head. The criminal complaint describes Sunde “did believe that Halfmann would shoot her.”

Mutual aid was called in from the Milwaukee County Sheriff’s Office to bring its armored vehicle. They called them out on the PA system multiple times until eventually they decided to deploy gas into the van. Halfmann and Sunde reportedly exited the passenger side of the vehicle. Shots were reported being fired. Halfmann reportedly fell to the ground, but Sunde ran toward the east side of Highway 67.

Sunde struggled to climb a chain link fence. She cleared the fence and fell to the base of the overpass. Sunde reportedly had a knife and refused to drop it. She threatened to stab the police dog that was present, if the dog approached her. Sunde said, “Don’t make me stab the dog, I’m not dropping the knife,” according to a detective.

Multiple gas canisters were deployed at Sunde, and even a less-lethal impact round that struck her in lower back or buttocks area. Eventually, Sunde was taken into custody. Later in her interview with law enforcement, Sunde admitted “she could hear commands, but did not comply.”

The criminal complaint also explains Sunde admitted to stealing the vehicle from one of her customers “that pays her for sex” and who owed her $1,000. She claimed it was Halfmann’s idea.

Sunde also said she and Halfmann “intended to drive to Fond Du Lac with a half-ounce of cocaine, six to 14 grams of heroin, and a smaller amount of meth.”

The pair decided to halt the trip and were parked in Kettle Moraine State Park when they were approached by the DNR warden, sparking the chaotic chase.

According to court records, a deputy described “that Sunde was more likely a co-actor than a hostage and willingly participated in the stand-off with police.”

Halfmann remains at the hospital in critical condition. District Attorney Susan Opper has yet to file any charges against him.

Sunde will be back in court June 20.