For the third time this month, a cougar was spotted in Southeast Wisconsin. This time it was seen outside of Menomonee Falls.

For the third time this month, a cougar was spotted in Southeast Wisconsin. This time it was seen outside of Menomonee Falls.

The Wisconsin DNR tells TODAY'S TMJ4 the cougar was spotted near the intersection of Silver Spring Drive and Pilgrim Road.

The Department of Natural Resources is warning residents not to approach the animal and for now to keep your pets inside. 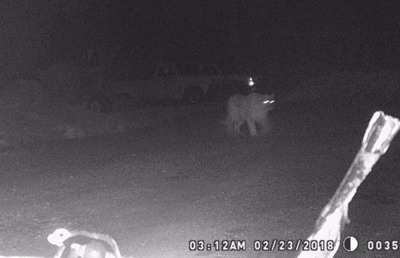 “I think it’s super unusual in the city. I wouldn’t suspect that there would be a cougar and also I have a young son so that’s a little scary,” said Connie Hogendyk, who lives in Menomonee Falls.

The DNR believes this is the same 50-pound cougar seen in other parts of the state. Most recently the 1 and a half-year-old big cat was spotted in Washington County before making its way to Waukesha County, first in Brookfield and now Menomonee Falls. The DNR said this is likely a lone male.

“It makes me nervous, but we’re aware...It’s more the size than it is the presence,” said Rebecca Calvin of Menomonee Falls.

Pet owners are hoping the cougar doesn’t stick around.

Photos of a large cat recorded by landowners near Menomonee Falls Feb. 23 have been verified by WDNR biologists as a cougar. This is likely the same cougar confirmed near Brookfield earlier this month. Residents are encouraged not to approach it and keep pets inside. pic.twitter.com/7iiE5iCA0j

“Not freaking out, but with the warm weather it’s kind of hard to keep your pets inside so I guess you just kind of have to keep watch of them,” said Greg Calvin of Menomonee Falls.

Others aren’t phased by the visitor.

“I think there’s always wildlife around and I think as long as you’re smart you know that a cougar sighting is no big deal,” said Maria Kovach of Menomonee Falls.

The DNR hasn’t specified where the cougar was seen. Police said they had a false alarm sighting in the area of Good Hope and Town Line Road, but it was just deer.