'His best work was probably ahead:' Marquette University mourns loss of business dean 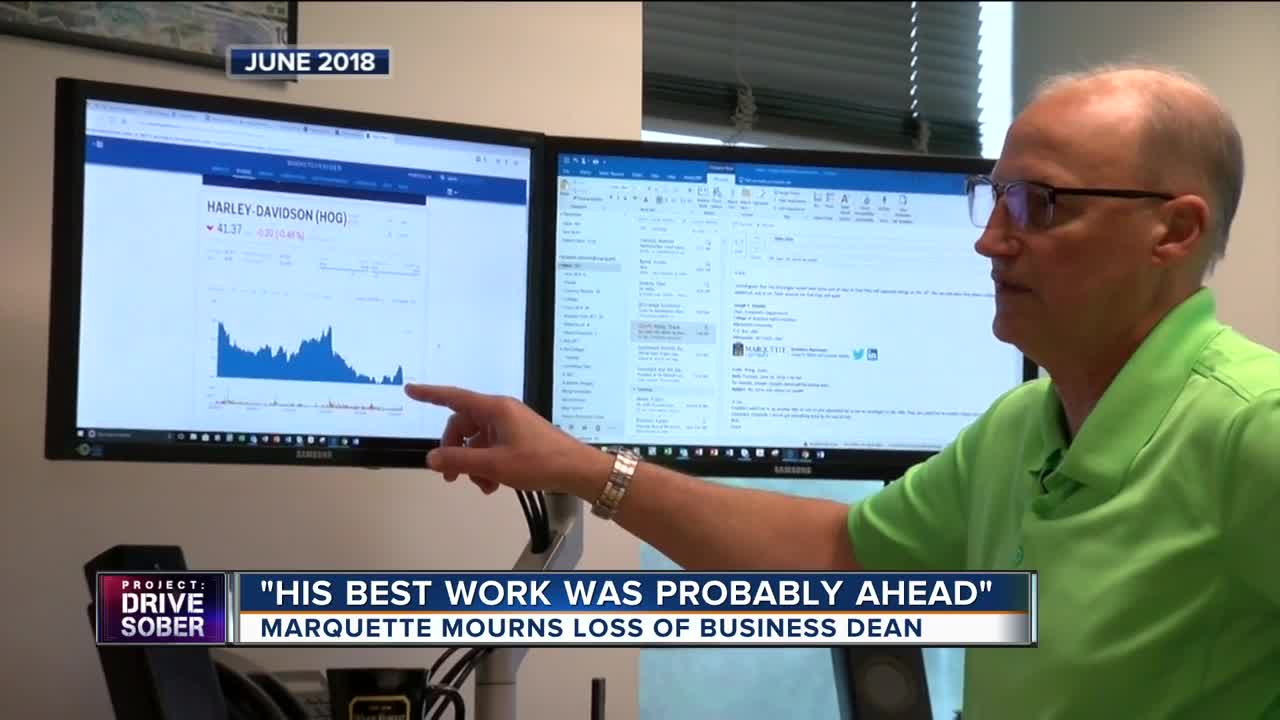 The Marquette University community is coming together after the death of one of their deans. Officials say he was killed in a crash Tuesday night on the edge of campus.

MILWAUKEE — The Marquette University community is in mourning after losing one of their own. School officials confirming that Dean of Business Administration Dr. Joe Daniels was struck and killed on campus Tuesday night.

Milwaukee police said a 20-year-old woman hit 60-year-old Dr. Daniels with her car as he crossed 10th and Wisconsin just after 8:00 p.m. He was transported to the hospital, where he was pronounced dead.

Investigators said the woman was speeding and had a valid green light signal when she drove through a hotel intersection. Officers arrested her for driving while under the influence of an intoxicant.

Dr. Daniels was just getting started in his job as the Dean of Business Administration, promoted last month from the role of acting dean after working at the university for more than three decades.

He was preparing for the construction of a new business school. Dr. Daniels played an instrumental role in moving the project forward.

Junior, Tom Schimmel got close to him in his introductory management class.

“I would see him like a year or two later and he would know who I was and know my name,” Schimmel said. “He saw a very bright future for the business school and I feel like his loss will be definitely noted.”

He was shocked to hear the news.

“It makes me kind of like sick to my stomach just to know that like somebody would not only put themselves in danger but obviously put other people in danger too,” Schimmel said.

The school canceled business classes on Wednesday, and a prayer service was held at the union.

Senior, Jimmy Carlton said Dr. Daniels was his advisor, who took a keen interest in his education.

“Sometimes it can feel like you’re on your own path you know in college and it definitely helps to have someone who seems like they actually care and I think he was one of those people,” Carlton said.

His memory was remembered even off-campus by Father Nicky Santos, a former Marquette faculty member.

“That’s really a big loss because Joe was one who truly embraced the Jesuit vision,” Santos said.

He said his impact reached many people.

“Really applying some of those economic principals to help the disadvantaged and marginalized groups,” Santos said.

Santos said Dr. Daniels was excited about the momentum surrounding the future of the business school, a future that students hope will live on in the years to come.

“It’s too bad that we lost him so early because I think his best work was probably ahead,” Carlton said.

“Hopefully his legacy will live on and I think it will.”

"Joe was a campus fixture for more than 30 years, and I was honored to call him my friend. He inspired students his entire career as a mentor and educator and made an indelible impact on the field of economics as a master scholar. Ultimately, Joe helped take Marquette Business to new heights. He was instrumental in inspiring a new vision for the college, which we will carry forward in his memory."

The university says counseling is available for students and staff over the coming days.