A newlywed couple in Franklin say their 10-week-old puppy died in their arms Sunday. They blame it on their breeder, for not disclosing the Siberian Husky had worms.

FRANKLIN -- A newlywed couple in Franklin say their 10-week-old puppy died in their arms Sunday.

They blame it on their breeder, for not disclosing the Siberian Husky had worms. The breeder calls it all a misunderstanding.

The couple, Antonio and Tiffany Bertoni, say they spent more than $3,000 to save their puppy.

"What was wrong with the dog?" asked TODAY'S TMJ4 reporter Julia Fello. 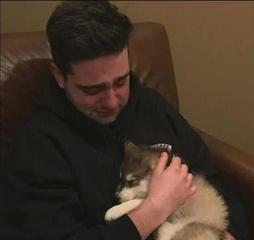 "He was very lethargic," replied Antonio.

"When we asked she said, 'Oh, he's just a runt. He was a little tiny. He didn't get as much milk,'" Tiffany added.

The Bertoni's say Dexter's weight dropped from eight to four pounds. That's when they confronted the breeder again.

"She said at that point, 'Well, he did have hook worms and we were treating it,'" said Antonio.

TODAY'S TMJ4 contacted the breeder, Haley Knighten in Oklahoma to get answers. She called back and agreed to talk on a recorded line:

The couple paid $2,700 for a blood transfusion to save Dexter's life. Doctors realized he had another parasite, called Coccidia. He died in their arms Sunday on the way to the vet.

TODAY'S TMJ4 spoke to Veterinarian Libby Gutting at the Milwaukee Area Domestic Animal Control Commission, who is not connected to the case. She says reputable breeders should see a vet routinely to start vaccines and a deworming protocol before selling. The buyer then would be responsible for continued boosters.